Welcome to Viator!
By creating an account, you agree to our Terms & Conditions and Privacy Policy.
We're creating your account. This may take a few seconds...
Account creation successful! Thank you.
Something went wrong. Please try again on the sign up page.
Questions? (888) 651-9785(888) 651-9785
When are you traveling?
Select Dates
Recommendations
All Recommendations
Sichuan Cuisine
Visit Leshan Giant Buddha
See a Sichuan Cultural Show
Top Chengdu Temples
3 Days in Chengdu
Tibet Tours from Chengdu
How to Spend 1 Day in Chengdu
Price
US$0
US$500+
Duration
Time of Day
RatingClear
Specials

How to Spend 1 Day in Chengdu 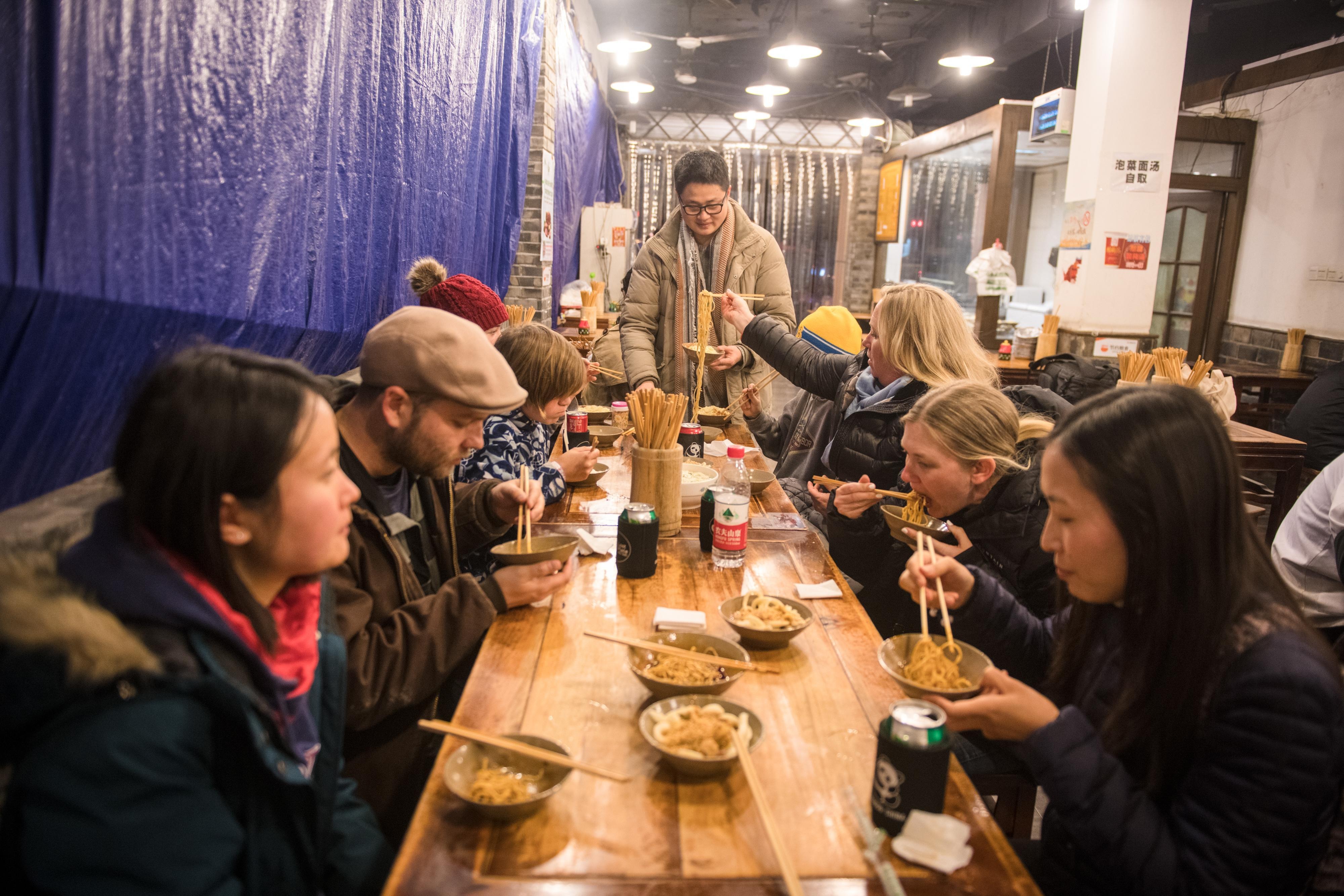 Home of giant pandas, an even bigger Buddha, and the famed fiery Sichuan cuisine, Chengdu is the hub of Southwest China and a gateway to Tibet. A day offers plenty of time to put your finger on the pulse of this city of 14 million people while seeing its two star attractions. Here’s how to make the most of your limited time.

Giant pandas have become a symbol of China, and Chengdu is one of the best places in the world to see them. Start your morning early with a guided tour of the Chengdu Research Base of Giant Panda Breeding. You’ll get to see plenty of giant pandas playing, snoozing, or munching on bamboo, as well as red pandas, and if you’re lucky, baby pandas in the Panda Nursery (particularly if you’re visiting in summer). Learn about the breeding of captive pandas while supporting one of the world’s most successful breeding centers.

While it makes for a full day, it’s well worth the long drive to see the Leshan Giant Buddha, a UNESCO World Heritage Site, during your visit to Chengdu. Take a boat trip along the river to see the world’s tallest Buddha statue from its base, or hike to the top for spectacular views of the region. Alternately, opt for a private or small-group sightseeing tour of Chengdu on foot or by bamboo bicycle. Learn more about Sichuan culture while taking in the highlights, including the Tibetan Quarter, Tianfu Square, People’s Park, and Wenshu Buddhist Temple.

Night: Night at the Opera

You can’t leave Chengdu without experiencing two cultural icons—hot pot and Sichuan opera—and it’s easy to combine them into one night on the town. Start with a meal at a traditional hot pot restaurant, where you can throw your favorite ingredients into the bubbling stock pot in the center of the table. After your meal, head to a Chengdu theater for an evening of acrobatics, music, comedy, and the face-changing performances that characterize the opera of this region. If you’re in the mood for something a bit more low-key, head out on an evening tuk-tuk food tour instead.

10 Tours and Activities | All Chengdu Tours

176
Spend a morning with some of China’s most famous residents at the Dujiangyan Giant Panda Center or the Chengdu Panda Breeding Center from Chengdu. Led by a professional panda keeper, meander through the facilities and observe the pandas while you learn about their breeding and life stages. Also, you'll have the opportunity to visit the Red Panda area to learn more about this quiet yet territorial mammal.
…More
From
US$87.00
Price varies by group size
From
US$87.00
Price varies by group size
Gear/equipment sanitized between use
Transportation vehicles regularly sanitized
Regular temperature checks for staff
Learn More
Taking safety measures

45
Experience the mesmerizing melodies and intense action of the Sichuan Opera during a performance in Chengdu’s Shufenf Yayun Teahouse. Marvel at dazzling dancers and astounding acrobats as they deliver an extravagant spectacle of color and culture. Upgrade to enjoy unrivalled stage views from luxurious seats and pleasure your palate with snacks to accompany a Sichuan tea. For the ultimate experience, opt for ear grooming, a Chinese massage and a show costume dress up session that comes with a complimentary photograph.
…More
From
US$20.00
From
US$20.00

9
Avoid the hassle of making your way from and to Chengdu International Airport (CTU) with a convenient and cost-effective round-trip airport transfer. When you arrive in Chengdu, escape the crowded chaos of the airport and travel directly to your accommodation in an air-conditioned vehicle. Similarly, when your sojourn comes to a conclusion, travel to the airport in comfort and style and arrive well in advance of your departure flight.
…More
From
US$67.00
Price varies by group size
From
US$67.00
Price varies by group size

24
Discover the cultural and historical highlights of Chengdu on an enriching full-day tour of the spectacular city. On this private tour, venture to the Research Base of Giant Panda Breeding to spend several hours observing adorable pandas, and then absorb the sacred ambience of the Zen Buddhist monastery during a leisurely lunch. Sip refreshing tea at a traditional teahouse in the picturesque park, and then meander through the narrow alleys of Kuan and Zhai Lane for dinner. Upgrade to immerse yourself in the melodious magic of the Sichuan opera.
…More
From
US$147.00
Price varies by group size
From
US$147.00
Price varies by group size
Gear/equipment sanitized between use
Transportation vehicles regularly sanitized
Regular temperature checks for staff
Learn More
Taking safety measures

242
Set out in the evening with an expert guide and your own tuk-tuk driver to find the best dinner dishes in Chengdu on this tour. Explore pedestrian alleyways, hidden parks, and small temples where you visit favorite local eateries. Experience Chengdu's cuisine and culture by eating at the same places that local people do.
…More
From
US$66.67
From
US$66.67
Face masks required for travelers in public areas
Face masks required for guides in public areas
Face masks provided for travelers
Learn More
Taking safety measures

15
Immerse yourself in the captivating culture of Chengdu during an incredible Sichuan Opera show and traditional dinner. Depart from your hotel in a luxurious, air-conditioned coach and venture within a traditional restaurant to devour the local delicacy of Sichuan hot-pot. Sated, prepare to feast your eyes upon a colorful spectacle of acrobatics, music and comedy as you watch the extravagant Sichuan opera from a seat in a prime position.
…More
From
US$100.00
Price varies by group size
From
US$100.00
Price varies by group size

6
Stroll among the old shopping streets of Chengdu on a private tour and you’ll get a personalized look at the city’s different architectural styles. Visit Wenshufang Street, Jinli Street, and Kuanzhai Alley accompanied by your guide, and gain insights about  Wenshu Monastery along the way. Learn about Sichuan cuisine during lunch, and relax with private hotel transport.
…More
From
US$75.00
From
US$75.00

4
Spend time outdoors and discover the highlights of Chengdu on this action-packed private bamboo bicycle tour. A bicycle tour will help you save time and cover more ground than a walking tour, and you won’t have to worry about getting lost as a guide will lead the way. Pedal past the Tibetan Quarter, the Jinjiang River, Sichuan University, Tianfu Square, People’s Park, Jinli Street, Wenshu Buddhist Temple, and much more.
…More
From
US$41.00
From
US$41.00