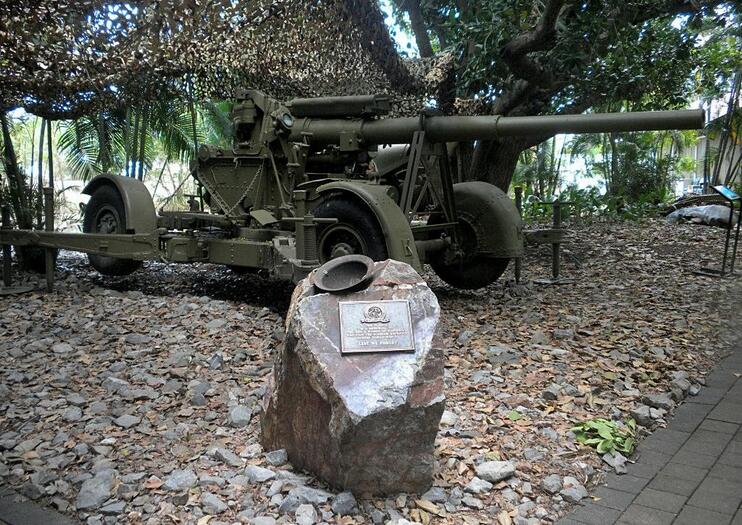 The Defence of Darwin Experience chronicles the Northern Territory’s role in World War II through a number of powerful exhibits that educate visitors on how the war deeply affected the region and its residents. This multimedia museum offers fascinating insight into the fateful events leading up to and on Feb. 19, 1942, when the Bombing of Darwin took place, killing over 250 people, sinking 10 ships, and kicking off a period of nearly two years of bombings in the Northern Territory. Guests can view historic equipment and artifacts from the war and listen to somber stories of locals’ whose lives were changed forever, as well as firsthand accounts of those who went off to war to avenge the lives that were lost.
Immersive exhibits include the Bombing of Darwin Gallery with its 3D helmets and sensory footage illustrating what it would have been like to witness the bombings, plus StoryShare, where locals record their own stories to be shared with museum visitors. Travelers can also record their responses to all they see and learn at the museum. As one of Darwin’s most significant historical sites, the attraction is often included in guided tours of the city.

5 Tours and Activities to Experience Defence of Darwin Experience

36
Explore the World War II sites of Darwin on this city sightseeing and cruise tour. Visit the Darwin war memorial and East Point Military Precinct, and explore Darwin Military Museum to chart the city’s wartime experience. Midway through, enjoy a small-boat cruise around Darwin Harbour, passing the modern naval base and the remnants and wreck sites of Japan’s devastating February 1942 air raids. Hotel pickup, entrance fees, and live onboard commentary included.
…More
From
US$99.51
From
US$99.51

Take a private military history tour in comfort during your time in the Top End. Our accredited local guides all have a passion for Darwin's history, heritage and culture, and they love sharing their knowledge and showcasing their town. Equipped with modern, comfortable air-conditioned vehicles, our guides are able to take you on a journey around Darwin describing the events of that fateful day in 1942 when Darwin was bombed, as well as the broader war history of the town. This private war history tour can be tailored specifically around the interests of guests. Price includes entrance fees to the Darwin Military Museum and the Defense of Darwin Experience, and Charles Darwin National Park.
…More
From
US$518.43
per group
From
US$518.43
per group

171
Go sightseeing in Darwin with a hop-on hop-off pass that is valid for 24 or 48 hours. Cruise to top spots including Crocosaurus Cove, the waterfront precinct, and Darwin Military Museum. Enjoy unobstructed views from the open-top double-decker bus and informative onboard commentary. Simply hop on board to travel from sight to sight, and explore in depth on your own by hopping off at any of the convenient stops. Opt for two different tour lengths to suit your sightseeing schedule.
…More
From
US$29.98
From
US$29.98
Face masks required for travelers in public areas
Face masks required for guides in public areas
Face masks provided for travelers
Learn More
Taking safety measures

46
Swap your cruise ship for a hop-on hop-off bus tour of Darwin on this sightseeing shore excursion. Select a 24- or 48-hour pass and explore the city in the Top End at your own pace. Board the open-top double-decker bus from the cruise terminal at Fort Hill Wharf and disembark at any of the 11 stops around Darwin, or simply stay on the bus for a 60- or 90-minute narrated tour. Visit the Military Museum, Botanic Gardens, Doctors Gully, Crocosaurus Cove and more!
…More
From
US$29.98
From
US$29.98
Face masks required for travelers in public areas
Face masks required for guides in public areas
Face masks provided for travelers
Learn More
Taking safety measures

6
Go sightseeing in Darwin on a 5-hour morning tour that takes you to top sites including Parliament House, Palmerston Town, the Darwin Botanical Gardens and the vibrant waterfront. Learn about the Darwin’s World War II history at the Defence of Darwin Experience, with admission to this military heritage site included in your tour. Have time to explore the Museum and Art Gallery of the Northern Territory, and stop by the Fannie Bay Gaol and Darwin Aviation Heritage Centre among other sites on this comprehensive introduction to Darwin.
…More
From
US$97.99
From
US$97.99
Hand sanitizer available to travelers and staff
Regularly sanitized high-traffic areas
Gear/equipment sanitized between use
Learn More
Taking safety measures