Welcome to Viator!
By creating an account, you agree to our Terms & Conditions and Privacy Policy.
We're creating your account. This may take a few seconds...
Account creation successful! Thank you.
Something went wrong. Please try again on the sign up page.
Questions? (888) 651-9785(888) 651-9785
When are you traveling?
Select Dates
Recommendations
All Recommendations
How to Spend 2 Days in Fez
How to Spend 1 Day in Fez
How to Spend 3 Days in Fez
Fez Architecture Guide
Top Souks in Fez
Price
US$0
US$500+
Duration
Time of Day
RatingClear
Specials 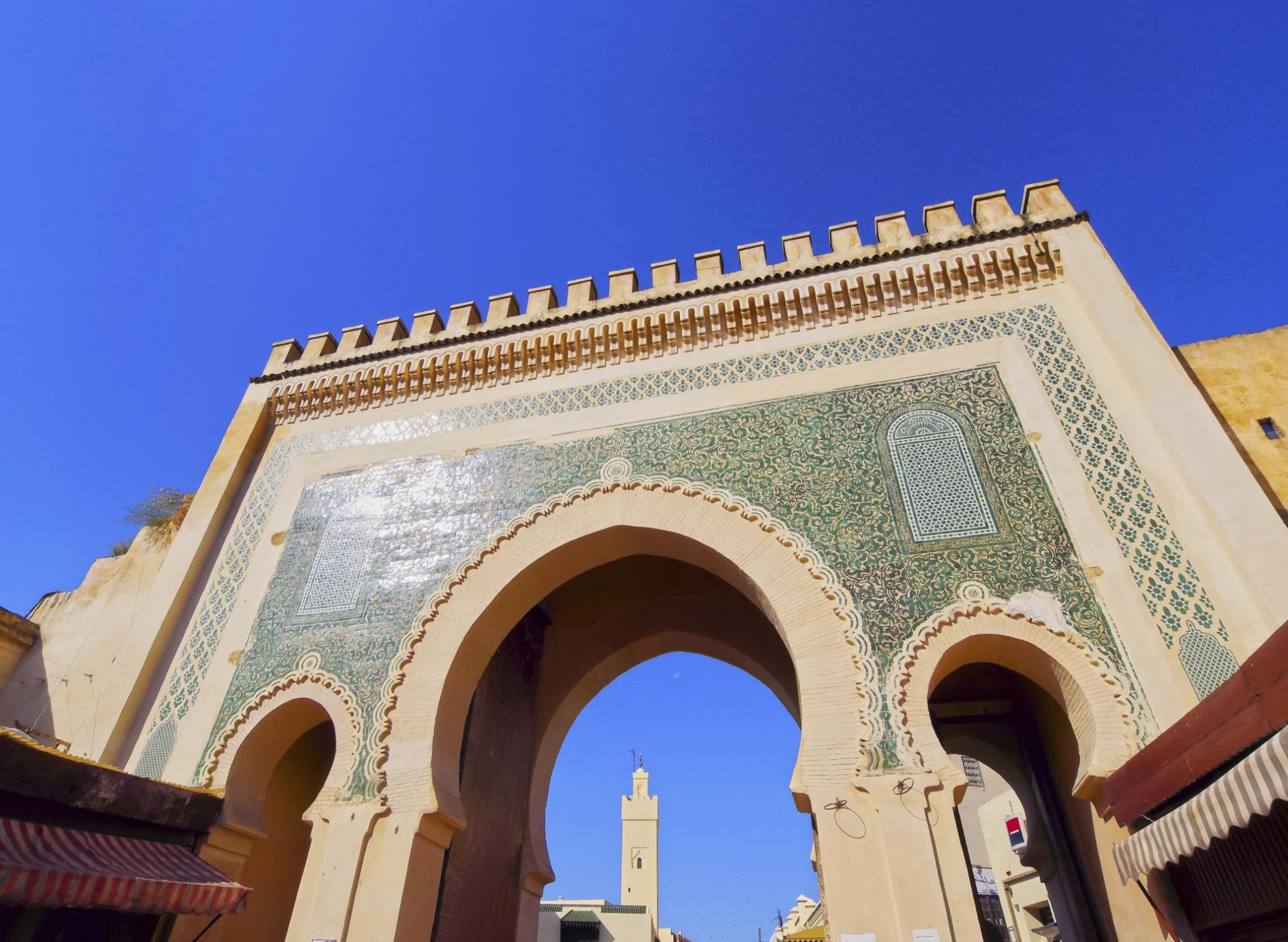 As the original capital and the oldest of Morocco’s imperial cities, Fez is home to some of the country’s most impressive traditional Moroccan architecture, concentrated in the UNESCO World Heritage-listed Medina of Fez. Don’t miss these celebrated mosques, madrasas, and palaces during your stay.

The Royal Palace in Fez, also known as Dar el-Makhzen, has one of the most impressive facades in town. The palace grounds are not open to visitors, but the giant brass doors,zellij tile work, and carved cedar wood frames are impressive in their own right.

These two imposing structures, both built by Sultan Ahmed al-Mansour during the end of the 16th century, offer the best panoramic views over the city of Fez and the old medina. The Borj Nord now houses a national armory museum, also worth a look.

One of the largest mosques in North Africa, the Kairaouine Mosque, is joined by one of the world’s oldest universities. While non-Muslims are not permitted within much of the structure, the recently restored university library is open to the public.

Founded in the heart of the Medina of Fez, these two madrassas are best known for their inner courtyards, adorned with spectacular displays of calligraphy, carved plaster and cedar, as well as stunningzellij mosaics. Both are open to non-Muslims.

Situated on the edge of the old city, this ornamental gateway (sometimes spelled Bab Boujeloud) into the heart of the city was built in 1913 on the site of the original 12th-century gate. The towering horseshoe arch is decorated with blue and green mosaic tiles.

5 Tours and Activities | All Fez Tours

1
Discover the iconic sites of an ancient Imperial city on a private, full-day tour of Fez.  Take in the broad esplanade of the Royal palace and the 16th-century architecture of Borj Sud, then go deep into the UNESCO-recognized medina. Follow narrow lanes to covered bazaars and an eminent madrasa, and pass riverside tanneries and hillside shrines. Get a glimpse of daily life in bustling Nejjarine Square, discover Moroccan art in the Dar Batha Museum and leave the medina to visit potters’ studios and Borj Sud, an imposing Saadian watchtower.
…More
From
US$156.70
Price varies by group size
From
US$156.70
Price varies by group size
Face masks required for travelers in public areas
Face masks required for guides in public areas
Hand sanitizer available to travelers and staff
Learn More
Taking safety measures

104
Follow winding streets into the heart of the Fez medina, a UNESCO World Heritage Site, on a guided walking tour through the walled city. Pass a series of historic mosques, the Nejjarine Fountain, an iconic madrasa, and the colorful tannery, then browse for handicrafts at a traditional souk, or market. Walking alongside an expert local guide, you’ll learn the stories behind the medina’s intricate gates, with tips on where to eat, drink, and explore in one of Morocco’s most vibrant cities.
…More
From
US$50.00
per group
From
US$50.00
per group

6
Join a private guide on a full-day tour of the Fez medina, a fascinating walled city that’s a UNESCO World Heritage Site. You’ll enter Bab Boujloud gate, then visit a series of spiritual and cultural landmarks, from a pair of historic madrasas to the Nejjarine Museum. Continue to colorful tanneries before leaving the medina for a trip to the Royal Palace and Bab Fettouh cemetery, where you’ll find sweeping views across the city. With the personal service of a private guide, this full-day tour is ideal for first-time visitors.
…More
From
US$102.46
Price varies by group size
From
US$102.46
Price varies by group size

39
Join a private guide for a fascinating tour of Fez and discover historic sites, winding lanes, and the bustling heart of the city. Follow narrow streets into the medina, a UNESCO World Heritage Site, stopping at mosques, a celebrated madrasa, and the colorful Fez tanneries, which date back to Medieval times. Throughout the day, you’ll enjoy the flexible, personal experience of a private guide, with time to shop, explore, sample local treats, or just soak up the vibrant atmosphere at your own pace.
…More
From
US$45.00
Price varies by group size
From
US$45.00
Price varies by group size
Face masks required for travelers in public areas
Face masks required for guides in public areas
Social distancing enforced throughout experience
Learn More
Taking safety measures

6-Hour Private Walking Tour of the Medina in Fez

5
Follow ancient, winding lanes into the heart of the Fez Medina with a 6-hour, private walking tour that’s the perfect way to experience this fascinating medieval city. Discover historic mosques and hidden caravanserais, and see a legendary pair of madrasas. Take in picturesque gates, the Moulay Idriss Mausoleum and the city’s distinctive, colorful tanneries. Learn about the history and culture of one of Morocco’s Imperial Cities, and enjoy the flexibility of a private tour to explore at your own pace, with time to visit the places that interest you most.
…More
From
US$70.00
Price varies by group size
From
US$70.00
Price varies by group size