Chapel of the Ascension Tours 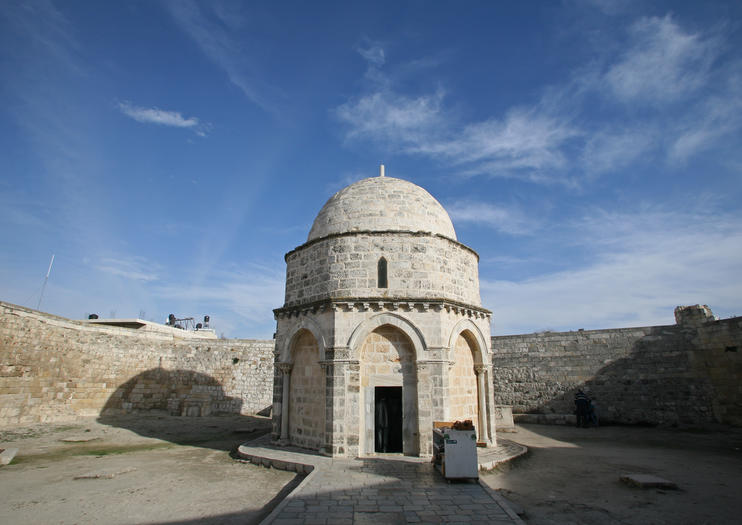 The Chapel of the Ascension on Jerusalem’s Mount of Olives is a sacred site for both Christians and Muslims. It claims to be the oldest of three churches located on the Mount. Though Jesus is believed to have taken his final steps before ascending to heaven here (there is even a footprint impression on a stone slab that is believed to be from Jesus’s right foot), the site has since been converted to a mosque, after being captured by the Muslim sultan Saladin in the 10th century. It remains under the control of an Islamic group, though all faiths are welcome.
Many believe Jesus’s Assumption, 40 days after his resurrection, had taken place inside a cave. Nonetheless a church was built in this spot in the 4th century. Its exterior is marked by archways and slim marble columns, built in a Romaneque style.

The Chapel of the Ascension is located in the At-Tur district of Jerusalem. It is open to visitors daily during daylight hours.
Address: Mount of Olives, Jerusalem, Israel
Read MoreShow Less

8 Tours and Activities to Experience Chapel of the Ascension

Palm Sunday in Jerusalem: Mass at Bethpage and Via Dolorosa Procession

2
Experience Palm Sunday in Jerusalem, join a holiday mass at Bethpage Church and follow in Jesus’ footsteps in a procession along the Via Dolorosa. Hear cries of ‘hosanna’ as you walk alongside an international crowd of pilgrims, pass the Church of Ascension and Garden of Gethsemane, then enter Jerusalem’s Old City by the ancient Lion’s Gate. Slip into the Church of St. Anne and visit the legendary Pool of Bethesda before ending the 6-hour tour at your hotel.
…More
From
US$80.00
From
US$80.00
Face masks required for travelers in public areas
Face masks required for guides in public areas
Hand sanitizer available to travelers and staff
Learn More
Taking safety measures

Start a 3 day Journey through the Christian top sites in Israel. Begin in Holy Jerusalem make your way along Western Wall, Church of Holy Sepulchre, Continue to Bethlehem to visit the Church of the Nativity, In the Footsteps of Jesus - Walking tour – Pater Nostre, Garden of Gethsemane, Church of St. Anne and the Pool of Bethesda, Notre Dame De Sion and continue Massada, Dead Sea and then back Jerusalem.Sites across Holy Israel!  . • 3 touring days with a government licensed English speaking guide in an air-conditioned vehicle. • Visit Jerusalem, Church of Holy Sepulchre, In the Footsteps of Jesus • Ascend to the top of Masada by cable car. • Float in the famous salt-rich waters of the Dead Sea. • Explore Bethlehem's Christian landmarks. • Hotel pickup and drop-off
…More
From
US$640.00
Price varies by group size
From
US$640.00
Price varies by group size
Face masks required for travelers in public areas
Face masks required for guides in public areas
Hand sanitizer available to travelers and staff
Learn More
Taking safety measures

17
Jerusalem is considered holy to three of the world’s largest religions, and it has the amazing array of sites to match. On this tour, see important attractions to Christianity, Judaism, and Islam—from the Mount of Olives and Dome of the Rock to the Garden of Gethsemane—all in just one day. Go between sights with the ease of included transportation and the benefit of guided commentary.
…More
From
US$36.15
From
US$36.15

16
Discover Jesus’ Jerusalem on a full-day, private tour that’s designed around Biblical sites, from the Mount of Olives to the Church of the Holy Sepulchre. Flat-rate pricing for up to six people makes this a great, money-saving option for small groups, and you can enjoy the day at your own pace as you see the places where Jesus is believed to have taught and performed miracles.
…More
From
US$545.00
per group
From
US$545.00
per group

3
Visit Israel’s iconic Christian and Jewish sites on this comprehensive 4-day tour of the Holy Lands. With an informative guide, gain valuable insight into the most notable places in Jerusalem, Jericho, Bethlehem, Nazareth and Lower Galilee. Experience firsthand some of the most sacred spots in the world, like the sites of Jesus’ birth, baptism and crucifixion; the Western (Wailing) Wall, the holiest of Jewish sites; Temple Mount and the Dome of the Rock; and so much more. Three nights of accommodations, transportation and some meals are included on this tour.
…More
From
US$665.00
From
US$665.00
Face masks required for travelers in public areas
Face masks required for guides in public areas
Hand sanitizer available to travelers and staff
Learn More
Taking safety measures

Jerusalem Walking Tour: In the Footsteps of Jesus

41
Retrace the footsteps of Jesus on this full-day guided walking tour of Jerusalem. Travel along the Via Dolorosa, the street Jesus walked on the way to his crucifixion. Walk down the Mount of Olives and see other prominent sites in Old City Jerusalem, like the Pool of Bethesda, St Anne’s Church, the Convent of the Sisters of Zion and more. Jerusalem hotel pickup and drop-off included.
…More
From
US$89.00
From
US$89.00
Face masks required for travelers in public areas
Face masks required for guides in public areas
Hand sanitizer available to travelers and staff
Learn More
Taking safety measures

In the Footsteps of Jesus Jerusalem Biblical Trip from Jerusalem

2
Retrace the footsteps of Jesus on this full-day guided tour of Jerusalem—an unforgettable experience for Christians and biblical history buffs. Visit the Church of the Ascension and the Church of All Nations with an overview of the Old City from the Mount of Olives. Then enter through the Lion’s Gate and see the Pools of Bethesda and the Church of St. Anne. Hear biblical stories during this popular walking tour.
…More
From
US$90.00
From
US$90.00
Face masks required for travelers in public areas
Face masks required for guides in public areas
Hand sanitizer available to travelers and staff
Learn More
Taking safety measures

In the Footsteps of Jesus Jerusalem Biblical Trip from Tel Aviv

2
Retrace the footsteps of Jesus, and learn about Jerusalem’s most important holy sights, on this full-day guided tour. Exploring Jerusalem with a guide means you won’t get lost, and you’ll hear in depth commentary along the way. Tick off many top landmarks in a day, including the Mount of Olives, the Church of the Ascension, the Church of Pater Noster, the Church of All Nations, and the Basilica of the Holy Sepulchre.
…More
From
US$99.00
From
US$99.00
Face masks required for travelers in public areas
Face masks required for guides in public areas
Hand sanitizer available to travelers and staff
Learn More
Taking safety measures