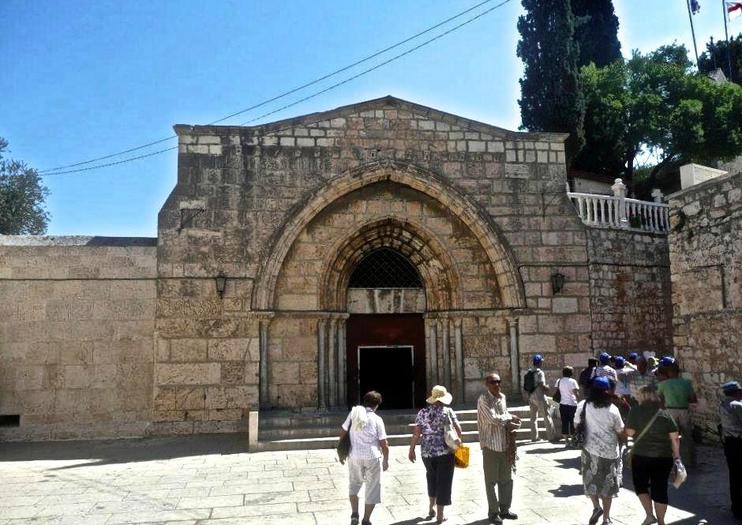 At the base of the Mount of Olives lies the site believed by Eastern Christians to be the Tomb of the Virgin Mary (Mary's Tomb). Her monument there, embedded in rock, commemorates Mary’s Assumption and ascension into heaven. Following a dark, winding staircase down to the burial site, the walls are decorated with historic art depicting Mary, the mother of Jesus. In the crypt itself, hanging lamps and burning candles and incense create a low lit, peaceful atmosphere.
Tradition states that her body was received on the third day following her death, leaving her tomb empty. Traditions following her death here are said to taken place since the 2nd and 3rd centuries. The church that sits above is believed to have been built around the time of the Church of the Holy Sepulchre, making it one of the oldest near-complete religious buildings in Jerusalem.

The tomb is open Monday to Saturday from 6 am to noon and from 2:30 to 5 pm. The closest gate from the Old City of Jerusalem is Lion’s Gate.
Address: Mount of Olives, Jerusalem, Israel
Read MoreShow Less

17
Jerusalem is considered holy to three of the world’s largest religions, and it has the amazing array of sites to match. On this tour, see important attractions to Christianity, Judaism, and Islam—from the Mount of Olives and Dome of the Rock to the Garden of Gethsemane—all in just one day. Go between sights with the ease of included transportation and the benefit of guided commentary.
…More
From
US$36.08
From
US$36.08

16
Discover Jesus’ Jerusalem on a full-day, private tour that’s designed around Biblical sites, from the Mount of Olives to the Church of the Holy Sepulchre. Flat-rate pricing for up to six people makes this a great, money-saving option for small groups, and you can enjoy the day at your own pace as you see the places where Jesus is believed to have taught and performed miracles.
…More
From
US$545.00
per group
From
US$545.00
per group