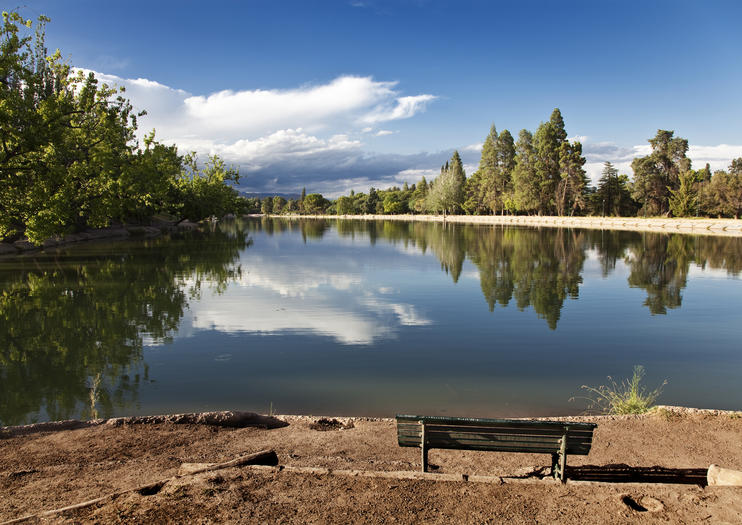 With ornamental fountains and classical statues, a lake and monuments, the park was created in the 1890s following English and French landscaping traditions.

Grand entry gates lead to pathways winding through the park, passing 34 sculptures along the way. Boats play at regattas on the lake, and the rose garden is traced with walkways.

Take in views from atop Cerro de la Gloria with its statues to the Andean Army, and stroll past more than 300 species of exotic trees.

The park also has a zoo inside its 307-hectares (758 acres), home to lions, elephants, zebras, giraffes and monkeys.

5
Get a comprehensive overview of Mendoza on this 4-hour sightseeing tour. Visit the city's landmarks and highlights, learning about the people and culture through your guide's commentary. Tour ends at the famous Our Lady of Lourdes sanctuary. Round-trip transport from select local hotels provided.
…More
From
US$15.00
From
US$15.00
Face masks required for travelers in public areas
Face masks required for guides in public areas
Hand sanitizer available to travelers and staff
Learn More
Taking safety measures

10
Discover what makes Mendoza so charming on a sightseeing tour of the city, situated at the foot of the Andes mountains. Visit major landmarks, plazas, and stadiums such as Alameda and General San Martin Park, and enjoy Mendoza's natural beauty and interesting architecture. This morning tour, led by a knowledgeable guide, includes hotel pickup and drop-off by coach.
…More
From
US$14.99
From
US$14.99
Face masks required for travelers in public areas
Face masks required for guides in public areas
Hand sanitizer available to travelers and staff
Learn More
Taking safety measures

City Tour And Wines With Lunch

1
Maximize time in Mendoza with this full-day tour. Join a local guide to learn about the city’s culture and history while visiting top landmarks including City Hall, San Martin Park, and Cerro de la Gloria. After the city tour, discover the secrets of winemaking in Mendoza with lunch and a tasting at a local winery.
…More
From
US$114.55
From
US$114.55

We´re the only who are offering this tour. The idea is to show our City in a very different way. That is way why offer this product just for tips!!! We want that you discover mendoza
…More
From
US$5.13
From
US$5.13

1
Enjoy the city walking Visit the most important places of the city Enjoy the market with regional products A Mendoza walking tour around this oasis city, plenty of tree lined streets and irrigation cannals that connect us with the founding times of Mendoza. We’ll visit the Independence main square and the four smaller surrounding it. While walking along the pedestrian street Sarmiento, we will learn about mendocinians lifstyle and the most representative buildings as Pasaje San Martín or Culture Ministry. Then we will head forward the Central Market where we can try some local tastes as “alfajor or dulce de leche”. After this, we go ahead to the famous Emilio Civit Avenue and to the San Martin historical Park with its emblematic gateway. On the way back, we will pass by the Aristides Avenue to get the feeling of its lively environment of bars and restaurants.
…More
From
US$35.00
Price varies by group size
From
US$35.00
Price varies by group size

What beter than ride a bicycle around Mendoza City, squares and Parks. A way to get in contact with the history of the region while having fun. Guided by a local.
…More
From
US$38.15
From
US$38.15

3
Argentina’s Malbec wine is famous all around the world and the country’s finest wines are produced in the Mendoza region, in the foothills of the Andes mountain. On this tour, fly into Mendoza on a day trip from Buenos Aires and immerse yourself in Argentine wine and cuisine. Visit three prestigious wineries, sample a variety of Malbec wines during expert-led wine tastings, and enjoy a gourmet lunch at a winery restaurant.
…More
From
US$350.00
From
US$350.00
Face masks required for travelers in public areas
Face masks required for guides in public areas
Hand sanitizer available to travelers and staff
Learn More
Taking safety measures

Private Tour from Mendoza to the Divisadero Largo

We offer to the tourist the possibilite to discover a treasure close from the city. No many people even the locals knows the secrets and the amazing senery you can see onces you´re there! The tour was developed with passion and sincere admiration for our land. we want to share it with all of you
…More
From
US$7.00
From
US$7.00

Things to do near Mendoza