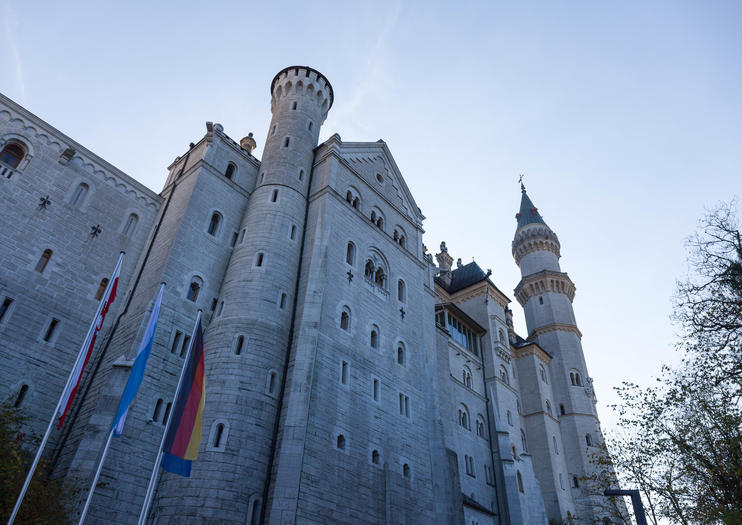 Visit Bavaria’s royal castles and you’ll get a serious dose of German history and fairytale architecture, courtesy of their maker, King Ludwig of Bavaria. See below to discover the most ornate palaces in the region and learn how best to see them.
Neuschwanstein Castle
The inspiration for Disney’s Sleeping Beauty, Neuschwanstein was built by King Ludwig II in the 19th century. Capture the architectural grandeur and picturesque mountain scenery on a visit to this UNESCO-listed site.
How to Visit: Choose between small-group and private tours, many of which combine a visit to Neuschwanstein with stops at other German castles, such as Linderhof and Hohenschwangau. Opt for a multi-day trip to explore more of Bavaria, or spend the day in the quaint village of Oberammergau before returning to Munich.
Hohenschwangau Castle
Perched on a hilltop overlooking the Alpsee and Schwansee lakes near the Austrian border, the magnificent Hohenschwangau Castle was the childhood home of King Ludwig II.
How to Visit: For the royal treatment, choose a full-day tour that visits multiple Bavarian castles, including Hohenschwangau, Linderhof, and Neuschwanstein.
Linderhof Palace
Thought to be modeled after the Palace of Versailles in France, Linderhof Palace is the smallest of the three palaces built by the king and the only one that he lived to see completed.
How to Visit: Keep Munich as your home base by booking a single-day tour to Linderhof (many of which combine a visit to this palace with stops at other castles), or choose a multi-day trip to see more of Bavaria.
Herrenchiemsee Palace
One of King Ludwig II’s homes on Herreninsel Island, Herrenchiemsee showcases the king’s legacy. It is also thought to be modeled after the Palace of Versailles.
How to Visit: Herrenchiemsee Palace is most often visited from Munich by train. A guided trip through the palace, combined with a walking tour of the palace’s gardens and a boat tour of the surrounding islands, is a great way to spend a full day.
Read MoreShow Less
Munich Tours & Activities (12)
Filter
•

4631
Witness the fairy tale castles of Neuschwanstein and Linderhof, created by Germany’s 19th-century King Ludwig II, on a day trip from Munich. Traveling by air-conditioned coach, admire Bavaria's magnificent scenery as you journey to Linderhof, Ludwig’s rococo-style hunting lodge and last home. Join an optional interior tour and then continue to Neuschwanstein, a picture book clutch of turrets and chambers that inspired Disney’s Sleeping Beauty castle. Enjoy free time in nearby Hohenschwangau village for lunch and to explore Neuschwanstein’s grounds, and take an optional castle tour. Entrance fees not included.
...  More
From
US$69.44
From
US$69.44
Learn More

635
Add a bit of legend and enchantment to your German vacation with a full-day trip to Neuschwanstein and Linderhof from Munich. Relax for the scenic coach ride through the Bavarian Alps, then spend hours exploring the former royal residences, sources of inspiration for modern fairy tales like Walt Disney's Sleeping Beauty. In your small group, tour the castle’s opulent halls, unique spaces and the incredible kitchens. Conclude with free time in the charming village of Oberammergau.
...  More
From
US$176.00
From
US$176.00
Learn More

2277
Travel from Munich to Bavaria’s Neuschwanstein Castle on this day trip that includes round-trip transportation by train. Often known as Germany’s "Cinderella castle," Neuschwanstein was actually the inspiration for a different Disney story, the ‘Sleeping Beauty’ castle at Disneyland. Take a guided tour of the castle, and hear stories about the "Mad" King Ludwig II, who commissioned it. The entrance fee is not included, but skip-the-line access is, so you won’t wait in the main admission queue.
...  More
From
US$65.85
From
US$65.85
Learn More

434
Experience the fairytale atmosphere of Neuschwanstein Castle and the Bavarian Alps during this full-day train excursion from Munich. Travel by rail to the village of Hohenschwangau, where you can pick between a tour of the castle’s interior (own expense) or a guided hike in the nearby foothills with views of the fortress. Train transport and your guide are included.
...  More
From
US$65.85
From
US$65.85
Learn More

Skip-the-Line Day Tour from Munich to Neuschwanstein and Hohenschwangau

19
Enjoy one of Bavaria's most popular attractions, Neuschwanstein Castle, on this day trip from Munich. Avoid the long ticket queues with skip-the-line admission and enjoy plenty of free time to explore this fairy tale castle that was the inspiration for Disney's 'Sleeping Beauty' castle. The train tickets for the round-trip journey from Munich to Füssen are included making this a hassle-free experience.
...  More
From
US$165.22
Price varies by group size
From
US$165.22
Price varies by group size
Learn More

12
Enjoy a day of sightseeing in the Bavarian heartland, including a visit to the popular Neuschwanstein Castle, on this guided, full-day tour from Munich. Bike through the historical town of Fussen en route to Hohenschwangau Castle and King Ludwig II’s palace of retreat, Neuschwanstein Castle. Along the way, see alpine peaks, towering mountains, and hidden castles. Bike rental, skip-the-line ticket, and city map are included.
...  More
From
US$77.82
Price varies by group size
From
US$77.82
Price varies by group size
Learn More

119
Enjoy a day of sightseeing in the Bavarian heartland, including a visit to the popular Neuschwanstein Castle, on this guided, full-day tour from Munich. First, choose from either a bike tour around the village of Hohenschwangau, including a swim in scenic Lake Alpsee, or go hiking and visit Hohenschwangau Castle, the childhood home of King Ludwig II of Bavaria. Then step inside the king’s palace of retreat, Neuschwanstein Castle, for a guided walking tour of one of Germany’s most popular attractions. Use of a bike and helmet are included.
...  More
From
US$60.17
From
US$60.17
Learn More

55
Escape to the islands of Herreninsel and Fraueninsel in the Chiemsee, Bavaria’s largest lake, on this full-day rail trip from Munich. Enjoy a guided tour of the stunning Herrenchiemsee Palace, modeled after the Palace of Versailles and one of King Ludwig II’s homes on Herreninsel Island. Then explore the historic Fraueninsel Island, whose origins date back 1,300 years, at leisure. Round-trip train ticket included. Castle admission and boat rides additional.
...  More
From
US$56.27
From
US$56.27
Learn More

Private Tour: Royal Castles of Neuschwanstein and Hohenschwangau from Munich

45
See two of the palaces built by King Ludwig II of Bavaria on this private, full-day royal castle tour from Munich. Escape to the Bavarian foothills of Füssen to see the Neuschwanstein Castle, the inspiration for Disney’s 'Sleeping Beauty' movie. Skip the line and enjoy a walking tour of this popular fairy tale abode. Also, see Hohenschwangau Castle, King Ludwig’s childhood home. Then, enjoy a stroll around Hohenschwangau’s scenic Lake Alpsee or visit nearby Linderhof Palace, modeled after the Palace of Versailles. Hotel pickup and drop-off and admission to all castles included.
...  More
From
US$552.58
Price varies by group size
From
US$552.58
Price varies by group size
Learn More

23
Enjoy a royal palace adventure in the Bavarian heartland on this 2-day tour from Munich. Start with a visit to Linderhof Palace in Ettal, which King Ludwig II of Bavaria modeled after the Palace of Versailles. Make a brief stop in Oberammergau before reaching Hohenschwangau. Then step inside the king’s palace of retreat, Neuschwanstein Castle, for a self-guided tour of one of Germany’s most popular attractions. After an overnight stay, visit Hohenschwangau Castle, the king’s childhood home. Transportation, accommodation plus breakfast and the entrance fee to Hohenschwangau Castle included.
...  More
From
US$305.30
Price varies by group size
From
US$305.30
Price varies by group size
Learn More

Royal Castle of Herrenchiemsee and Fraueninsel Day Tour from Munich

56
Visit Herrenchiemsee Palace, modeled after the Palace of Versailles by King Ludwig II, on this guided, full-day tour from Munich. Escape to an island in Lake Chiemsee, Bavaria’s largest lake, for a tour of the king’s final and most expensive castle (entrance fee not included). Then continue by boat to the Benedictine abbey of Frauenwörth, located in the beautiful, unspoiled landscape at the edge of the Bavarian Alps on Fraueninsel Island.
...  More
From
US$65.85
From
US$65.85
Learn More

Private Day Tour to Neuschwanstein, Linderhof and Oberammergau from Munich

13
Enjoy a day of sightseeing in the Bavarian heartland, including a visit to the popular Neuschwanstein Castle, on this private, full-day tour from Munich. Travel to this 19-century Romanesque Revival palace, built on a rugged hill above the village of Hohenschwangau near Fussen. Also, see Linderhof Castle, the smallest of the three palaces built by King Ludwig II of Bavaria and the town of Oberammergau, famous for its production of a ‘Passion Play.’ Lunch, all necessary entry fees, hotel pickup and return trip to Munich via train included.
...  More
From
US$717.16
per group
From
US$717.16
per group
Learn More