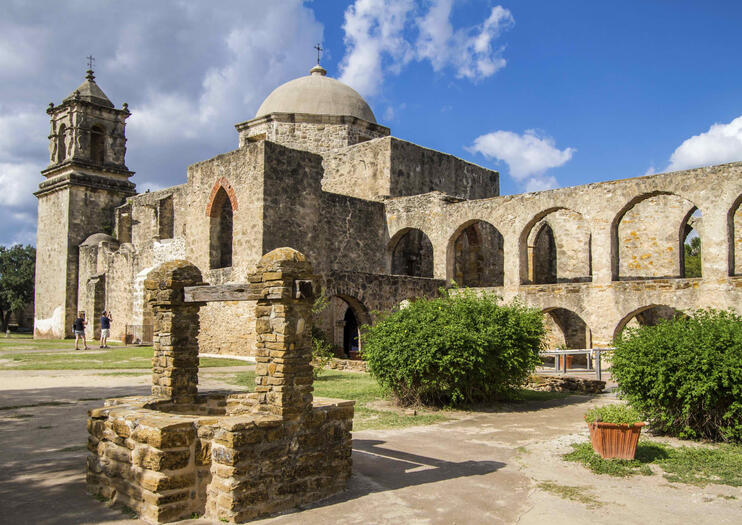 Built in 1782 out of Texas limestone and stucco, Mission San Jose is the largest mission in San Antonio, earning it the nickname Queen of the Missions. While portions of the church and its gristmill and granary have collapsed over the years, much of the structure has been fully restored to its original design.

Start your explorations of Mission San Jose at the visitors center, where you can learn more about colonial Spanish missions, and watch a short film about the park and the indigenous communities of South Texas in the 18th century. Tours of San Antonio’s UNESCO-listed missions typically stop by Mission San Jose, along with Mission Concepción. Many also include the Alamo, San Antonio’s most famous mission.

Mission San Jose is located in San Antonio Missions National Historical Park. Ten miles (16 kilometers) of hiking and biking trails connect the four missions in the park to the Alamo in downtown San Antonio. To get there by public transit, take VIA Bus 42 or VIVA Bus 40.

Mission San Jose is usually open daily from sunrise to sunset (except for Thanksgiving, Christmas, and New Year’s Day). Check the national park website for the schedule of ranger-led programs.

Some 300 years of history are on display at this national park site in San Antonio, home to four historic Spanish missions along the San Antonio River. Besides Mission San Jose, check out Mission Concepción, the nation’s oldest unrestored stone church. Mission Espada, dating back to 1690, was the first mission founded in Texas, and Mission San Juan Capistrano is known for its lovely gardens and fountain-filled courtyards.

18
Visit some of the historical missions of San Antonio on this half-day tour. With a guide, you'll explore these heritage sites to learn about the history of the missions and their influences on the region, plus gain insight into their significance from a San Antonio local. This tour allows you to avoid the hassle of renting a car to reach these destinations so you can relax and enjoy a pre-planned tour.
…More
From
US$70.84
From
US$70.84
Face masks required for travelers in public areas
Face masks required for guides in public areas
Hand sanitizer available to travelers and staff
Learn More
Taking safety measures

17
This tour is the perfect way to see the missions and learn about the founding of San Antonio with its rich history and culture. Experience Spanish History, the Coahuiltecans, and the early southwest. Learn about the significance of San Antonio, San Pedro Springs, and the groups that came together to set the stage for the founding of the Presidio - San Antonio. Your experience starts downtown, see: the original La Villita; Main Plaza, San Fernando Cathedral, and Plaza de Armas. Travel along the San Antonio River to visit all the missions with stops at Concepcion, San Jose, San Juan, Espada, and the Espada Aqueduct. Tour ends at Mission San Antonio de Valero, famously known as the Alamo, or guest's hotel. Guaranteed Departures, Twice a Day! No minimum guest requirements.
…More
From
US$65.00
From
US$65.00
Face masks required for travelers in public areas
Face masks required for guides in public areas
Hand sanitizer available to travelers and staff
Learn More
Taking safety measures

4 Missions 3 Wheels 2 Instax Pics... 1 Heck of a Good Time! The best way to see the only UNESCO World Heritage site in the great state of Texas is via a Modern Vespa SiDeCaR! We drive you on a tour to four of San Antonios’ Missions! With a born-and-raised-in-San-Antonio personal guide on hand to interpret, you will gain a better understanding of San Antonio’s heritage. We will have refreshments along the way and some tacos(San Antonio is a UNESCO designated city of gastronomy)! You will also receive 2 Instax Photos as a tangible reminder of you experience. This is an up-close look at all four Spanish Missions. These UNESCO World Heritage sites are all still active parishes. It’s definitely a must do while in San Antonio! * Weight limit - 230lbs/98kg-Per Person * Vehicle carries 1 guest in the SiDeCaR * Transportation back to Downtown San Antonio is provided from last mission
…More
From
US$99.00
From
US$99.00
Face masks required for travelers in public areas
Face masks required for guides in public areas
Hand sanitizer available to travelers and staff
Learn More
Taking safety measures

79
Skip the hassle of renting a car and see San Antonio’s highlights in just a few hours on this sightseeing excursion, a great choice for first time visitors and those with limited time. You’ll walk the grounds of Mission San Jose and stroll through the streets of the historic King William District, traveling between attractions with ease in a comfortable van. A drive by the up-and-coming Pearl District is also included.
…More
From
US$30.77
From
US$30.77

277
Explore the colonial past of Texas on a day trip to San Antonio Missions National Historical Park. Avoid the stress of navigating alone and instead relax on the ride to the four iconic missions, still standing as they were in the 1700s. Going with a guide ensures you learn more about Spanish colonization of native peoples than you might find in a guidebook.
…More
From
US$41.03
From
US$41.03

Things to do near San Antonio