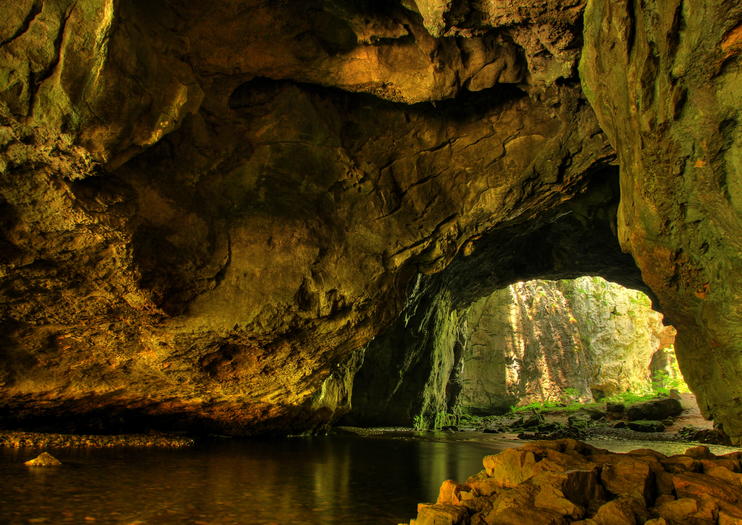 Formed by the Reka River, which still flows through this underground canyon, the Škocjan cave system is a 4-mile (6-kilometer) network of interconnected caves and one of Slovenia’s most impressive natural attractions. The UNESCO World Heritage Site includes cavernous chambers, pools, sinkholes, and jumbo-size stalactites and stalagmites.
The Basics
Visitors can explore the Škocjan cave system during various guided tours. Lasting 1.5–2 hours, the Through the Underground Canyon tour includes access to many of the dramatic subterranean landscapes, such as the Silent Cave, a dry canyon replete with stalactites, stalagmites, and flowstones; and Cerkvenik Bridge, which is suspended about 160 feet (50 meters) above the Reka River. Between April and October, it’s possible to take the Following the Reka River Underground guided tour, which follows the river path.
Visitors can prebook tour tickets for the caves and make their own way to the site. Alternatively, visit as part of a half-day or full-day tour from Ljubljana, Koper, Rovinj, or Trieste in Italy. These longer tours typically combine a cave visit with other Slovenian attractions, such as Lipica Stud Farm or the seaside town of Piran.
Things to Know Before You Go
How to Get There
Škocjan Caves are situated about 28 miles (77 kilometers) southwest of Slovenia’s capital, Ljubljana, and about 16 miles (26 kilometers) east of Trieste in northern Italy. Take the train from Ljubljana to Divača station. Shuttle buses run from the station to the caves.
When to Get There
Tours through the caves run year-round but are more frequent during the busy summer months (June–September). The caves are quieter in winter and the water levels of the Reka River are often higher, meaning the roar of the current can be louder.
The Škocjan Educational Trail
If, after seeing the caves, you want to further explore Škocjan Caves Regional Park, follow the self-guided Škocjan Educational Trail. This circular 1.2-mile (2-kilometer) walking route begins at the park’s visitor center, where you can see models of the underground canyon and exhibits explaining the unique karst landscape. The route leads past various geological features, including sinkholes, and through the villages of Betajna and Škocjan.
Address: Škocjan 2, Divača 6215, Slovenia
Admission: Varies
Read MoreShow Less

Things to do near Slovenia