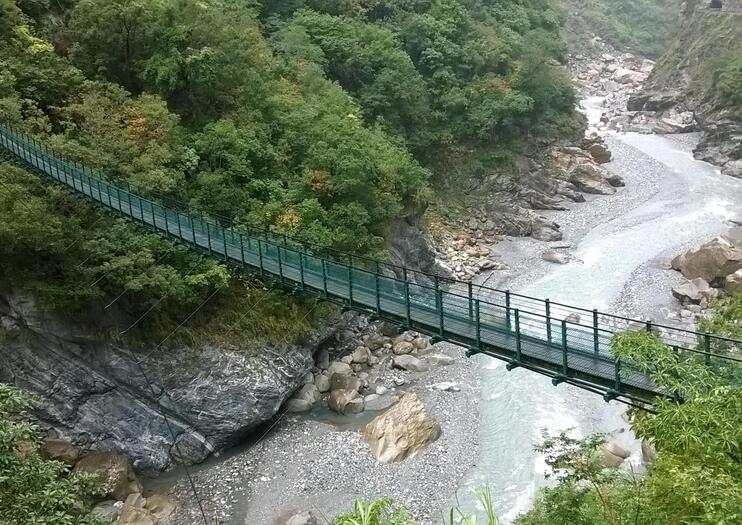 Home to towering peaks and verdant valleys, Hualien County provides an escape from the modern metropolis of Taipei. Tour Hualien and use it as a gateway to the famous Taroko National Park and the East Coastal National Scenic Area, hailed as Taiwan’s most attractive driving route.
The Basics
You have many options for exploring Hualien County, including day trips from Taipei that cover must-see sights such as the Taroko Gorge—generally explored via the dramatic Lushui trail—and Qingshui Cliff. Transport by car or round-trip train tickets are typically included. Car tours let you soak up the scenery of Highway 11 in the East Coastal National Scenic Area, while Hualien-focused tours take you off-the-beaten-path to the Morisaka village, Guangfu Sugar Factory, and the Xinshe rice paddies.
Things to Know Before You Go
How to Get There
There are frequent trains from Taipei to Hualien County, with the journey taking anywhere from two to five hours, depending on the type of train. For the fast train, hop on the Taroko Express and sit on the left-hand side of the carriage for the best views of the coast along the way. On arrival in Hualien, head to the Visitor Information Center, located in front of Hualien Station.
When to Get There
The rainiest months in Hualien are June, August, and September when the scenery is at its greenest but some natural attractions are off-limits. In the shoulder season of October, the weather is generally fine and prices are lower.
Hualien Highlights
In addition to natural wonders, Hualien County also boasts plenty of cultural and historical attractions. Take a walk through Hualien Railway Culture Park, home to old steam trains and railway structures from the 20th century, or check out Hualien County Stone Sculpture Museum, where you can admire sculptures in an outdoor space.
Address: Taiwan
Read MoreShow Less

2
Escape the city for a scenic drive along Taiwan’s most renowned coastal road, Highway 11, and enjoy spectacular views of the East Rift Valley, the Central Mountains, and the Pacific Coast. Stop along the way to climb Dashibi Hill, admire the Xinshe rice terraces, visit the old Japanese logging village of Morisaka, and stroll around Liyu lake.
...  More
From
US$115.39
Price varies by group size
From
US$115.39
Price varies by group size
Learn More

355
Visit the numerous temples, shrines, hot springs and national parks of Taiwan on this 5-day tour around the entire island. Leave bustling Taipei behind for the remote beaches and rocky coastal scenery of Sun Moon Lake, Taroko Gorge, Kenting National Park, and the East Coast National Scenic Area. Your guide provides insightful commentary on sites such as Fo Guang Shan Monastery, Wenwu Temple, Holy Monk Shrine, and Tse-En Pagoda.
...  More
From
US$596.93
From
US$596.93
Learn More

1
The Guangfu motorbiking route winds 21 kilometers up one of Hualien’s famous beautiful forest trail. Turn the throttle and zipping up through the cool mountain air, passing waterfalls and lanky palm trees to a altitude of 1,200 meters above sea level, from which distant mountains and lush valleys are just waiting to be instagrammed. Bring your loved one for a romantic view, your secret crush if you wish to have them fall madly for you, or your friends if you’ve already been left and need mother nature to console your bruised and bleeding heart. This trip is for the thrill-seeker, site-seer, nature lover, photographer, or just the average person looking to live a little.
...  More
From
US$170.18
From
US$170.18
Learn More

The cost is based on four people, and the locked group is a simple trip for European and American families. In terms of the current practice of marketing, the group tour of European and American guests is the product content of the seven-day round-the-island. In many exchanges with foreign guests, we also know that if someone can help arrange a small family to travel as a unit, they are very willing. In addition to privacy, the itinerary is also more mobile and close to demand. Therefore, the quotation of this itinerary is mainly based on the four-person trolley. This is one of the factors that are relatively high in the relative cost of transportation. However, in order to facilitate the promotion and close to the consumption habits of the guests, this is a necessary choice. The whole process of the trip is to use the local specialties of restaurants and accommodations, and to explain the history, culture and Taiwanese characteristics of the aborigines, so that guests can travel to Taiwan through interest and depth. , event content, prefer Taiwan, understand Taiwan. In the design of the itinerary, we will include our intentions in order to bring a different trip to Taiwan for the coming guests.
...  More
From
US$538.47
From
US$538.47
Learn More

Visit Hualien at your own pace, we will provide recommended itinerary and bus time schedule so that you can explore HUanlien in ease. We especially provide one day tour to Taroko National Park to visit the iconic scenic spots of East of Taiwan. 1. Taiwan Tourist Shuttle Bus ticket Hualien route *1 (one day unlimited ride) 2. Voucher for one day tour to Taroko National Park (with professional tour guide and Traveling liability insurance NTD 2,000,000 attached 100,000 medical insurance for the tour) 3. Hotel stay with breakfast *1 (車站100米 100m B&B or 承憶文旅 Hotelday+ Hualien or 香城大飯店Hualien Charming City Hotel) #We reserve the right to modify hotels depending on room vacancies. 4. Hualien city transportation card(with NTD200 value added) 5. Voucher for bike ride at Liyu lake *1 6. Meal voucher for dinner at 王記茶鋪Wang's Tea House*1
...  More
From
US$170.00
From
US$170.00
Learn More

4
Soak up Taiwan’s beautiful scenery on a 2-day tour of the East Coast National Scenic Area and Taroko National Park. Take a round-trip train from Taipei to Hualien. You’ll visit the Pachi scenic lookout and Caves of the Eight Immortals, then tour the Eternal Spring Shrine and Swallow Grotto at Taroko Gorge. Stay overnight in Hualien at a 4-star hotel and enjoy coach transport with narration by an informative guide.
...  More
From
US$260.26
From
US$260.26
Learn More

This is a 10 days Taiwan Excursion which can lead you to explore this beautiful island. On the 9th day, with our One-Day Pass for metro, you can enjoy a sightseeing tour in Taipei City with metro by yourselves!
...  More
From
US$1,320.08
From
US$1,320.08
Learn More

The eastern part of Taiwan has some of the most beautiful scenery. On this tour, you will visit Taroko Gorge, as well as other scenic attractions, such as Pachi scenic lookout, Tropic of Cancer, and Caves of the Eight Immortals. We provide One-Day Pass for metro; you can explore Taipei City for your free time on your own.
...  More
From
US$693.52
From
US$693.52
Learn More

Visit numerous bustling cities, see magnificent national parks and scenic areas, venture to historical settlements, and more: this seamless, 6-day tour whisks you to many of Taiwan’s most characterful corners. Travel to lively cities like Taichung, Kaohsiung, and Hualien; see the Taroko Gorge National Park, Sun Moon Lake, and East Coast National Scenic Area; step back in time during a trip to the Lukang Historic Area; and much more. Round-trip bus and train transit, comfortable hotel stays, select meals, and guided excursions are all included.
...  More
From
US$812.83
From
US$812.83
Learn More

4
Venture out of the bustling city of Taipei to explore central, southern, and eastern Taiwan on this 6-day tour. Admire the country’s natural beauty as you visit a number of national parks, lakes, and coastal areas. Learn about ancient Buddhist culture at a number of temples including the famous Fo Guang Shan and sample delicious Taiwanese food with included daily breakfasts and other delicious stops.
...  More
From
US$707.11
From
US$707.11
Learn More

Taiwan’s east is known for breathtaking scenery. Our Eastern Beauty Tour brings you to well-known scenic spots and hidden gems alike. Along the way we’ll experience awe-inspiring scenery (including Taroko Gorge and the Rift Valley), visit the villages of indigenous tribes who’ve called this land home for thousands of years, eat amazing meals and have plenty of opportunities for leisure and outdoor activities including hiking, boating and bicycling through the awe-inspiring terrain for which the area is justly known. In between the bucolic splendor, we’ll also make time to explore Hualien and Taitung, two of the east coast’s largest cities. Though equally laid back, both cities boast their own unique cultural caches.
...  More
From
US$955.00
Price varies by group size
From
US$955.00
Price varies by group size
Learn More

Taiwan’s east coast is known for its unparalleled natural scenery, indigenous culture, exquisite dining, and outdoor activities. Our tour will bring you to well-known scenic spots and hidden gems alike in luxury and style. Along the way you’ll experience awe-inspiring natural wonders (including Taroko Gorge and the East Rift Valley), traveling through the heartland of Taiwan’s indigenous cultures. You’ll have plenty of opportunities for leisure and outdoor activities including hiking, boating, bicycling and even hot-air ballooning. In between the bucolic splendor, we’ll also make time to explore Hualien and Taitung, two of Eastern Taiwan's largest cities, each boasting their own unique cultural caches. Though the route is similar to our standard Eastern Beauty Tour, our Premium tour package offers five star accommodations, exquisitely prepared meals in some of eastern Taiwan’s best restaurants and opportunities for adventure not available on our standard tour.
...  More
From
US$1,310.00
Price varies by group size
From
US$1,310.00
Price varies by group size
Learn More

Most tourists in Taiwan visit Taroko Gorge- the largest marble cliff in the world with beautiful turquoise waters - and stop there. This tour is for visitors who want to explore Taiwan further. Travel deeper along the island's majestic East Coast and dine with indigenous tribes and a Michelin-star chef who uses local ingredients. Cycle through famous rice paddies, green vistas, and lesser-known beaches. Explore all that Taiwan's East Coast has to offer on this premium, 8-day tour!
...  More
From
US$2,720.00
Price varies by group size
From
US$2,720.00
Price varies by group size
Learn More

Things to do near Taiwan