How to Spend 1 Day in Tangier 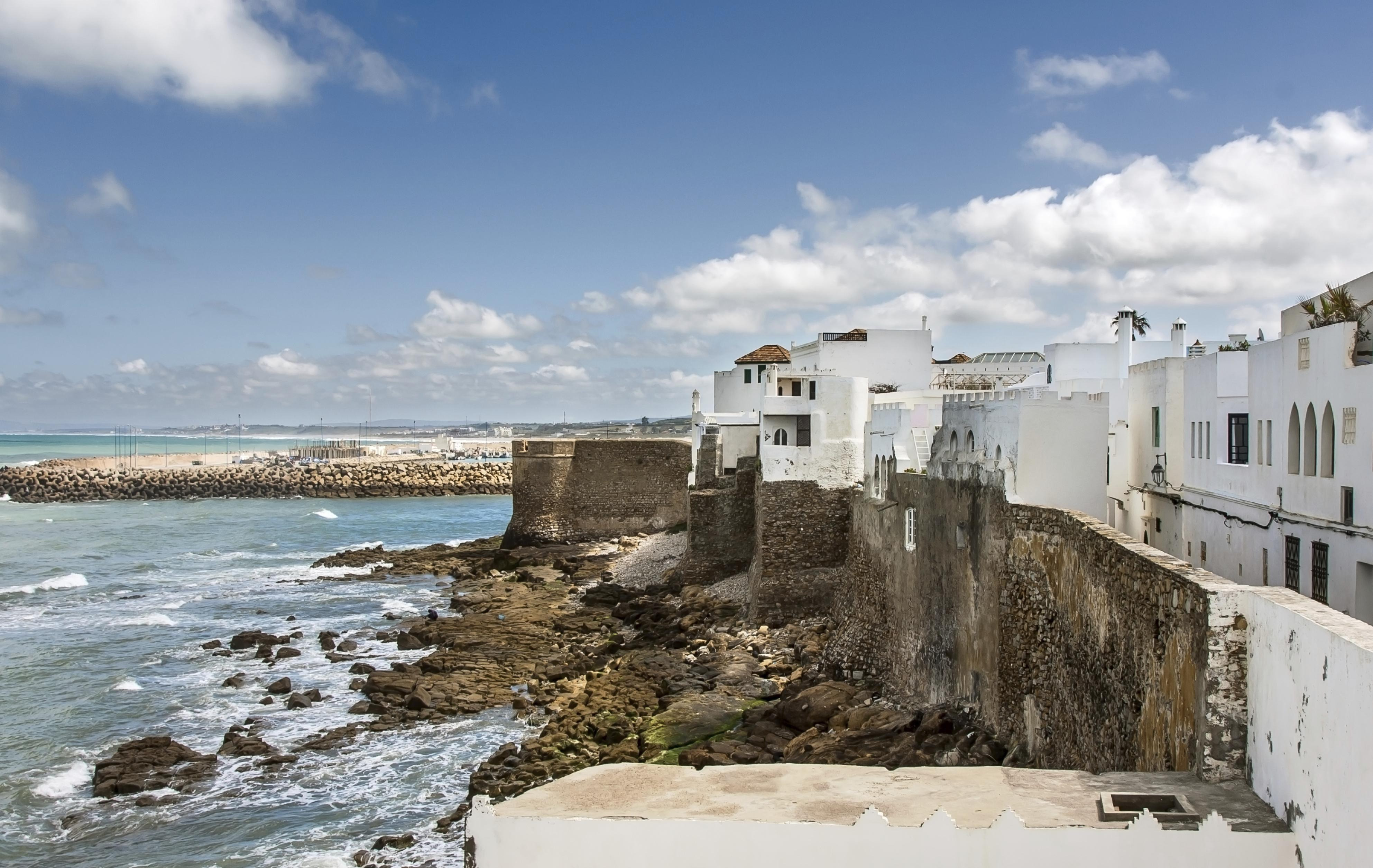 A heady mix of North African and European influences, the port of Tangier is one of Morocco’s liveliest and most charismatic cities. From its hilltop casbah and warren-like medina to its European-built whitewashed Ville Nouvelle quarter, beaches, and out-of-town sights, here are our ideas for seeing as much as possible in a day.

Finding your way around Tangier can be confusing, so save time with a hop-on hop-off tour. Ride the city loop around the Ville Nouvelle and medina districts, passing mosques, monuments, and open plazas en route. Learn about the landmarks via the audio commentary, and alight at stops that interest you such as Moulay Hafid Palace, the marina, and Grand Socco square, home to a medina gateway.

Alternatively, join a private or group tour by foot or minivan to explore with a guide. These typically include forays into the medina and its Kasbah Museum, along with stops to view the Grand Mosque and mysterious seafront Phoenician tombs.

Some of Tangier’s must-sees lie outside the city along Morocco’s picturesque Atlantic–Mediterranean coast, so switch to the hop-on hop-off coastal route this afternoon. Gaze at the spot where the Atlantic Ocean and Mediterranean merge from the lighthouse at Cape Spartel, and explore the Caves of Hercules—wind-sculpted grottoes where the sea crashes through an Africa-shaped aperture.

If Tangier’s culinary scene tempts you, book a food walking tour. Dip into the medina’s cafés to sample specialities beloved by locals—tasting sweet pastries, cheeses, mint tea, and more. Alternatively, join a cooking class to prep dishes such as tagines and fresh bread before savoring them in true Moroccan style.

Evening: Indulge in a Shopping Spree

Tangier’s medina is a shopper’s paradise, so end your day with a private tour of its tightly packed lanes. Choose a late-afternoon start—the medina springs back to life come twilight—and scout the alleyways and markets with the help of your guide. Shop for everything from leatherware to tea glasses, and pick up on your guide’s bartering know-how to leave with bags of bargains. Or, take a camel ride along Tangier’s beaches as the sun sets over the sands and city’s palm-lined promenades.

11 Tours and Activities | All Tangier Tours

See Tangier through the eyes of a local with this authentic city tour. Explore the old medina, see the towering Kasbah with its marble courtyard, and visit the Tangier American Legation Museum. Enjoy lunch with a local family or in a traditional restaurant before heading to the countryside. See the Caves of Hercules, Cap Spartel, and the scenic hills on the outskirts of the city.
…More
From
US$191.63
Price varies by group size
From
US$191.63
Price varies by group size
Face masks required for travelers in public areas
Face masks required for guides in public areas
Face masks provided for travelers
Learn More
Taking safety measures

12
If you want to visit Tangier at your own pace the double-decker tourist bus is your answer! You can get on and off all day long with the same ticket, and learn about the history of the city through a comfortable audio system with earphones, in eight different languages. We give you a guide map containing all the stops of the route. Our new buses are adapted for people with reduced mobility and have a sliding roof in case of rain; they are fitted with anatomical seats. Moreover, there's always a stewardess on board.
…More
From
US$15.67
From
US$15.67
Face masks required for travelers in public areas
Face masks required for guides in public areas
Hand sanitizer available to travelers and staff
Learn More
Taking safety measures

24
Get to know Tangier on this private day-long sightseeing tour, with a personal guide. Head into the walled 'medina' (old quarter) to explore its alleyways and 'kasbah' (fortress), and visit a souk and bakery to sample traditional local breads. Gain insight into the city’s heritage on a tour of the new town, and check out sights on the Mediterranean and Atlantic coasts, including the Punic-Roman necropolis, Cape Spartel, and famous Caves of Hercules.
…More
From
US$85.58
Price varies by group size
From
US$85.58
Price varies by group size

10
Discover fascinating history and vibrant culture on a 4-hour sightseeing tour of Tangier, and take in the iconic sights of an ancient city. Explore the Hercules Caves beneath Spartel Cape, whose lighthouse guides ships through the treacherous Straights of Gibraltar. Trace the narrow lanes of Tangier’s old medina, an atmospheric labyrinth of craftsman’s shops that runs along the bustling port. Visit the storied Grand Socco, and walk in the footsteps of its former residents; Matisse, Paul Bowles and William Burroughs lived and worked in this atmospheric seaside city.
…More
From
US$53.04
Price varies by group size
From
US$53.04
Price varies by group size
Face masks provided for travelers
Hand sanitizer available to travelers and staff
Social distancing enforced throughout experience
Learn More
Taking safety measures

1
Learn how to make traditional Moroccan dishes during a cooking class in Tangier. After visiting a souk to purchase ingredients, you'll be taught recipes and given tips to create authentic cuisine in a professional but relaxed atmosphere.
…More
From
US$117.45
From
US$117.45

Shop your way through Tangier markets, souks, and bazaars on a private Tangier shopping tour that takes the stress out of finding the city’s best treasures. Instead of dragging your purchases through a series of taxis, you can explore the city in the comfort of a climate-controlled vehicle, with a personal guide to help bargain for handicrafts and other unique Tangier souvenirs.
…More
From
US$68.01
Price varies by group size
From
US$68.01
Price varies by group size
Face masks required for travelers in public areas
Face masks required for guides in public areas
Face masks provided for travelers
Learn More
Taking safety measures

3
During your Tour with our licensed passionate tour guide, you will have the opportunity to taste many classics of Moroccan cuisine and a wide choice of local products while taking advantage of many explanations and anecdotes about the city of Tangier and the products tasted. Feel free to ask your questions and share your culinary experiences. The more you interact, the more you will discover! As its name indicates, this experience is far from being a simple guided tour, it will be combined with more than 06 taste stops as well as a meal of resistance. you will try and taste dishes that characterize the local cuisine and part of the culinary history of Morocco. The taste program can change according to the season and according to your desires.
…More
From
US$54.24
From
US$54.24

A walking tour of Tangier is a great way to get a lay of the land, and going with a guide provides visitors with the info they need to continue further on their own. Stroll past Portuguese fortifications in the Mediterranean port city and head down historical lanes in the medina for a closer look at architecture, gardens, and markets. You’ll stop at a Moroccan restaurant to purchase lunch.
…More
From
US$18.55
From
US$18.55

7
To help you discover the hidden gems of this Moroccan beauty, we’re going to get up close and personal to some of the most iconic sights, Kasbah (fortress), Sultan's palace colorful Souks, the Medina and everything in between, we‘re going to take time to really see, enjoy and appreciate all the details. Have an experience of a lifetime in completely safe hands, our guide services focus mainly on the historical and the cultural aspects. this walking tour will give you a real feel of the true Tangierian spirit that the average tourist cannot live.  To discover the real Tangier you need a local expert to take you to the Medina in which everything is surprisingly different from anything you’re used to; the people ,the sounds, the smells and the striking colors through a maze of streets and alleyways, each area in the old town has its own character. The challenge you will be facing is how to get into the real hidden Tangier. At Locals WeGo we make sure you discover these hidden spots.
…More
From
US$38.64
Price varies by group size
From
US$38.64
Price varies by group size

607
Uncover the alluring mystery of Morocco on an immersive full-day trip to Tangier from Costa del Sol. Cruise over the Strait of Gibraltar and enjoy incredible ocean views before arriving amid the exotic scents and sights of Tangier. With a knowledgeable guide, stroll around bustling medinas and souks; feast upon the explosive flavors of an authentic Moroccan lunch; and purchase bespoke souvenirs at a Tangier bazaar. Enjoy the convenience of round-trip transportation from Costa del Sol.
…More
From
US$130.18
From
US$130.18
Face masks required for travelers in public areas
Face masks required for guides in public areas
Hand sanitizer available to travelers and staff
Learn More
Taking safety measures

97
Plunge into the rich cultural tapestry of Morocco on a full-day trip to Tangier from Seville. Alongside your guide, travel to the African continent while absorbing views of the Bay of Tangier and the Strait of Gibraltar. On arrival in Tangier, plunge into the whitewashed cascade of buildings on a guided walking tour; stroll the narrow streets of the medina and learn about the history and culture of the Moroccan metropolis. Lunch and round-trip transfers from Seville hotels are included.
…More
From
US$191.65
From
US$191.65
Face masks required for travelers in public areas
Face masks required for guides in public areas
Hand sanitizer available to travelers and staff
Learn More
Taking safety measures