Welcome to Viator!
By creating an account, you agree to our Terms & Conditions and Privacy Policy.
We're creating your account. This may take a few seconds...
Account creation successful! Thank you.
Something went wrong. Please try again on the sign up page.
Questions? (888) 651-9785(888) 651-9785
When are you traveling?
Select Dates
Recommendations
All Recommendations
How to Spend 3 Days in Victoria Falls
Food Lover's Guide to Victoria Falls
Top National Parks in Zimbabwe
Tips for Visiting Craft Markets in Victoria Falls
Price
US$0
US$500+
Duration
Time of Day
RatingClear
Specials 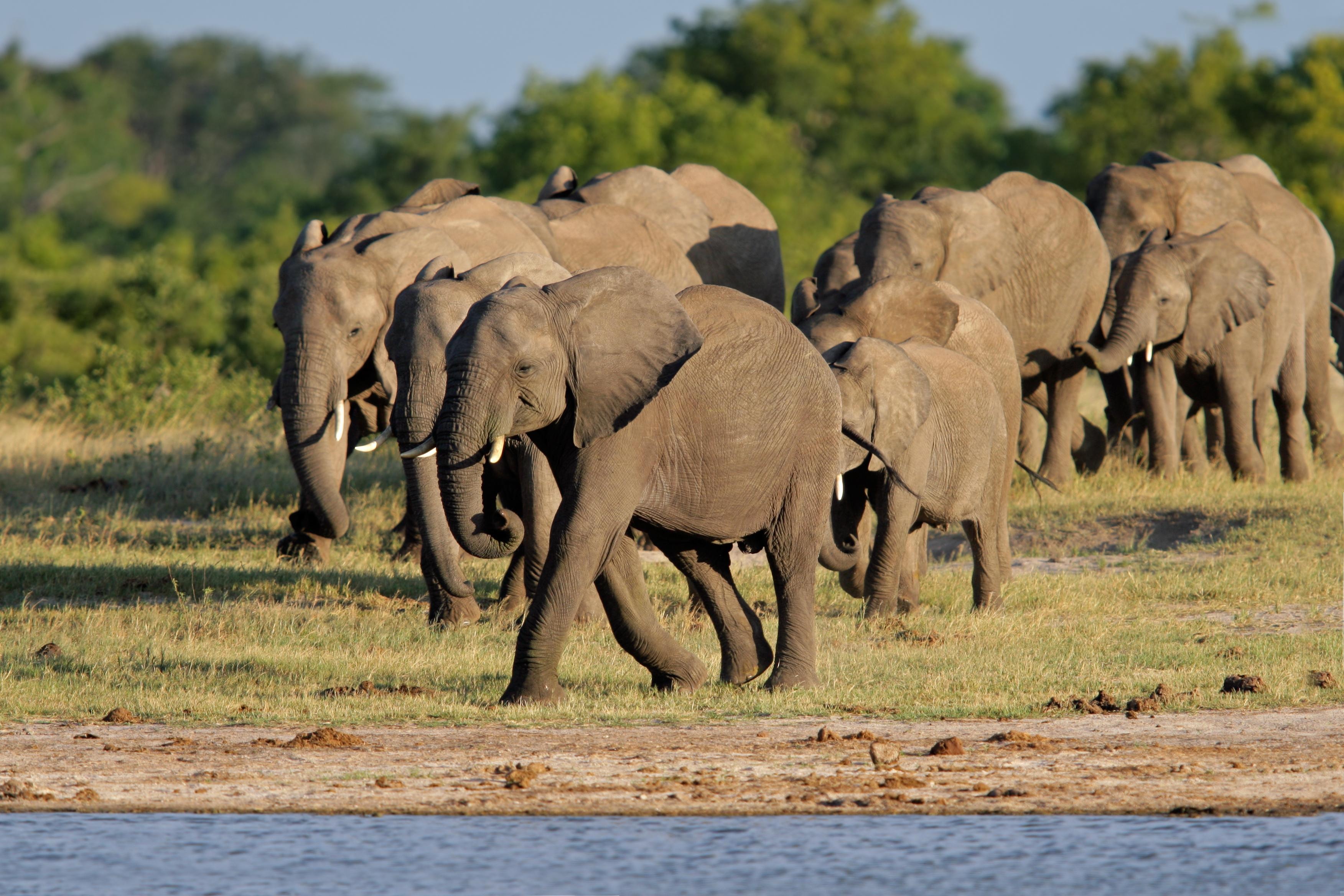 Zimbabwe, home to some of Africa’s most diverse and scenic national parks, makes an ideal destination for travelers eager to get outdoors, track wild game, and spot rare and beautiful species of African birds. Here are some of the country’s must-see national parks.

Spanning some 6,000 acres (2,428 hectares) along the Zambezi River, this lush rainforest reserve boasts views of the famous falls and well-marked hiking trails. Most tours of the national park include the big attractions: Victoria Falls Bridge, Devil’s Pool, and several lookout points.

The largest game reserve in Zimbabwe, Hwange National Park is home to more than 100 species of mammals and 400 species of birds, making it ideal for a game drive or a horseback safari. Most day tours to the park leave from Victoria Falls, about a 2.5-hour drive.

A UNESCO World Heritage Site, Matobo National Park is known for its majestic granite formations known as kopjes. A hidden gem of Zimbabwe, this park offers more in the way of landscape than wildlife, including the chance to see ancient San rock art caves. It’s also one of the best spots in the country to see black and white rhinos.

The name of this national park translates as “place of many elephants,” and that’s just what you come  to see in the southeastern Zimbabwe park, along with hundreds of species of birds that gather near the park’s pools and oases to drink. Both walking and driving safaris are permitted within the park.

Another UNESCO World Heritage Site, Mana Pools National Park ranks among the best parks on the African continent thanks to its wide range of mammals, aquatic wildlife, and some 350 species of birds.

15 Tours and Activities | All Zimbabwe Tours

69
Visit one of Africa's most popular parks on this Chobe day trip from Victoria Falls. Travel the rugged landscapes of the African countryside as you keep your eyes peeled for the Big Five. Chobe is known for its high concentration of elephants, so you're almost guaranteed to see these giant mammals roaming the park. Travel by both river and land, ensuring the best chance of seeing African wildlife.
…More
From
US$170.00
From
US$170.00

2
Discover parts of Zimbabwe, Botswana, and Zambia during this 4-day tour from Victoria Falls. Take a sunset cruise along the Zambezi River, soar over Victoria Falls in a helicopter, discover the troubled history of Livingstone which was once the capital of Northern Rhodesia, and observe the native wildlife on a safari through Chobe National Park. Discover the histories and wildlife of these three countries during this semi all-inclusive tour.
…More
From
US$1,200.00
From
US$1,200.00

9
See the best of Botswana’s wild animals by land and by sea on this safari tour to Chobe National Park from Victoria Falls. Opportunities to spot animals such as lions, elephants, and hyenas in their natural habitat more than justifies the journey, while all-inclusive transportation and lunch makes the trip as comfortable as it is convenient.
…More
From
US$174.36
From
US$174.36

35
Maximize your chances of viewing wildlife in Chobe National Park on this full-day excursion from Victoria Falls. Take a safari through the park and cruise down the Chobe River with a guide for the opportunity to see native wildlife like big cats and tropical birds in their natural habitat.
…More
From
US$245.00
From
US$245.00

8
Take an incredible 5-day tour from Johannesburg to see the mighty Victoria Falls and look for the ‘Big Five’ in Botswana’s Chobe National Park. Fly to Victoria Falls and learn about the natural world wonder from a knowledgeable guide. Explore some of the verdant paths of Mosi-oa-Tunya National Park, and take a sunset cruise along the Zambezi River. Enjoy a game drive and another river cruise in Chobe National Park to look for more African wildlife. Included: Two nights accommodation in Victoria Falls village in Zimbabwe, two nights accommodation in Kasane, Botswana.
…More
From
US$2,425.00
Price varies by group size
From
US$2,425.00
Price varies by group size
Face masks required for travelers in public areas
Face masks required for guides in public areas
Hand sanitizer available to travelers and staff
Learn More
Taking safety measures

6
This Chobe National Park safari combines the best of an all-inclusive luxury tour and a budget safari. All food, lodging, and activities are included (you don’t have any surprise expenses), but camping in tents gets you closer to nature while saving you major money on accommodation. This tour also includes a popular river cruise and numerous game drives for added value.
…More
From
US$558.98
From
US$558.98
Face masks required for travelers in public areas
Face masks required for guides in public areas
Hand sanitizer available to travelers and staff
Learn More
Taking safety measures

1
On this adventure-filled, multi-day wildlife safari, you’ll cross into Botswana for a scenic camping stay at Chobe National Park, home to dozens of exotic animal species. Maximize your chances of hippo, crocodile, lion, and elephant sightings with boat cruises and open-air jeep rides through the grasslands. Experience an unparalleled nature immersion without skimping on perks, with tasty fireside meals and refreshing tea breaks.
…More
From
US$535.00
From
US$535.00

4
Hwange National Park's status as the largest game reserve in Zimbabwe — measuring roughly the size of Belgium — makes it difficult to know how best to explore the area on your own. Instead, join a guided tour that takes you to the park's highlights through a series of wildlife safaris, with plenty of opportunities to view animals like elephant herds, lions, and hyenas in their natural habitat.
…More
From
US$256.42
From
US$256.42

5
Visiting Victoria Falls from Livingstone with a guide not only eases transportation logistics, but also creates a richer experience at the falls. Your guide shares insight about how the waterfall was formed and takes you on a walking tour of the falls’ greatest attractions, including Victoria Falls Bridge, Devil’s Pool, and a waterside picnic area where you enjoy an included lunch.
…More
From
US$80.00
From
US$80.00

5
Experience nature right up close on a 4x4 day safari and river cruise at Chobe National Park. You'll follow an expert guide on a full-day journey into this incredible landscape and see crocodiles, hippos, birds and elephants. Cruise along the scenic Chobe River, then spend an afternoon on an open 4x4 safari looking for some of Africa's Big 5. Round-trip hotel transfer, lunch and refreshments are included in this memorable day outdoors.
…More
From
US$175.00
From
US$175.00

2
Experience Victoria Falls and Hwange National Park on a 5-day tour through Zimbabwe’s most iconic landscapes. Watch for hippos and crocodiles on an evening cruise of the Zambezi River, then tour the falls’ thundering pools and misty rainforests. Travel to Hwange to relax at a backcountry lodge and take morning and afternoon game-viewing trips into the country’s largest park; watch for Cape wild dogs and the Southwest African lion as you explore a thriving woodland on the edge of the Kalahari Desert.
…More
From
US$1,769.24
From
US$1,769.24

2
This overnight safari to Chobe National Park packs several activities into one short tour. First, take a boat cruise where you can spot hippos, crocodiles, elephants, Cape buffalo, birds, and more. After lunch and an afternoon game drive, settle in for dinner and drinks around the campfire. In the morning, take a final game drive and have breakfast in the bush before the journey back to Kasane.
…More
From
US$430.77
From
US$430.77

Highlights • Explore Zimbabwe’s largest wildlife park, Hwange departing from Victoria Falls • See Painted Dogs and learn all about their conservation • Enjoy lunch at the Hwange Safari Lodge • Chance to spot elephants, lions, leopards, buffaloes and more Kick your visit up a notch with a detour to Zimbabwe’s Hwange National Park, which is home to over 100 mammal and 400 bird species. You will get to see Painted Dogs (Africa Wild Dogs) which are among the continent's most endangered animals. Go on a thrilling game drive and meet most of Zimbabwe's local residents. Savor a wonderful lunch, relax and enjoy a cool swim as the heat of the day kicks in, followed by an end of day game drive.
…More
From
US$335.00
From
US$335.00

Explore Hwange National Park Camping and Victoria Falls parks in 3 nights 4 days. Arrive in Victoria Falls airport and be transferred to a lodge or Campsite within the Falls town and closer to the Falls .Enjoy a calm evening on a Sunset Cruise on the Zambezi river reaching out for Zambian side river banks to and from. Meet African Elephant swimming across the river with their young ones , the sightings are not guaranteed but a regular feature everyday.Opening the following day with a Sunrise Guided Tour of the Falls ,get packed lunches and pack for Hwange National park. In the Falls a wide number of the Falls views from an head on view ,close and wide clear for spectacular views. Get a feel of the falls closer. 2 nights in Hwange National park , famously known for its population with Elephants, lions ,Giraffes and many more of wildlife there... Note - Private Tours are available at 2 pax confirmation *****
…More
From
US$1,248.00
From
US$1,248.00

4
Experience Southern Africa’s iconic wildlife and landscapes on a 5-day tour to Victoria Falls and Chobe National Park from your chosen arrival are of Kasane or Victoria Falls. Cruise the Zambezi River, take a guided hike beside the falls then explore the area at your own pace. Travel to a safari lodge in the heart of Chobe to see the remarkable animals of Botswana’s first national park; Chobe is home to around 50,000 elephants, along with thriving populations of zebras, wildebeests and warthogs.
…More
From
US$1,415.39
From
US$1,415.39