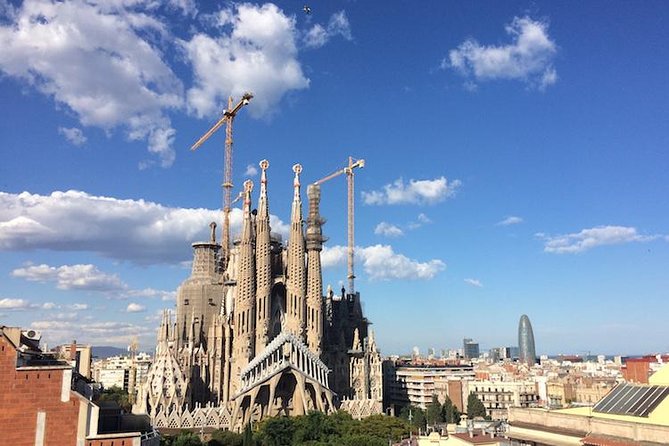 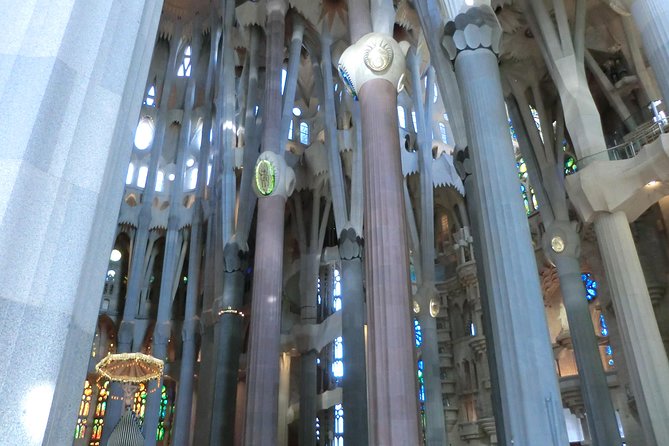 Pedal through charming streets of Barcelona on an electric bike tour and then skip-the-line at the magnificent Sagrada Familia Church. As one of the most popular tourist attractions in Barcelona, long lines wrap around the block to enter this world-famous structure, but this tour allows you to walk right in, saving you time while on vacation. A professional guide will lead you on the electric bike city tour and also through Sagrada Familia.

AlexWals
Barcelona E-bike Tour By Night & Magic Fountain Show | Jun 2019
Supposed to be a 2-hour ride. Gave us a only 1 small bottle of water and didn’t stop for more, during an almost 3-hour ride. Supposed to “meet at the fountain” in Plaza Real-very cool spot. Guide had NO way of being spotted-no flag, T-shirt, company name on his hat-just stood there. Even as we stood near him, he didn’t approach us (we were 5, all quite obviously looking around- so you think he’d have guessed we were his group-?). We and 4 other riders had to walk a few streets away to get to our bikes. We rode through VERY crowded streets- ok, but often hard to keep up with a group of 10, and hard to maneuver. The guide -seemed like a good guy, but was not a good guide, in this case-would stop here and there and talk about a site-but at least 8/10 times we couldn’t hear him due to traffic, not being able to get close, him not speaking loudly enough. He spoke English well, but accent was very hard to overcome in that situation. We got almost zero information. We didn’t stop for photos, til the fountain-NO planned stops, not even for sunset pictures (as was mentioned in the description), photos of our family on the bikes, photos at ANY of the monuments we drove near or stopped at, not even in front of the art museum, except when we FINALLY got to the Magic fountain-after fighting through very packed crowds by the cruise area, after one woman’s bike battery died, after we had to go a longer way because a gate he’d intended to use was locked, and after we had to take our bikes down 2-3 escalators -!- & a long staircase (that was ridiculous!). Stayed at fountain maybe 10 min; left via a dark road that didn’t feel quite safe (and then also down other streets that didn’t, in the dark)-then ran right into a HUGE, wild crowd. They neglected to plan around the massive Gay Pride event—super fun, but not when you’re trying to follow 9 others on bikes through waves of partying people, spilling drinks on our feet as we fought the crowds. NOT a good time. We drove back to the plaza on the very busy main streets-cool for us, but definitely not expected, and not for everyone. Hard to keep up through the lights and crowds; 4 missed the last turn because it was too crowded and the guide was too far ahead to see—he assumed we’d know where to go, & that we’d catch up, I guess? Then had to ride a few extra blocks to the shop. missed our dinner reservation. Should’ve had a van pick up the bikes at the magic fountain and ended it there, or cut out a few of the points.
...Read more

Daniel S
Barcelona E-bike Tour | Gaudí & The Catalan Modernism | Jun 2019
This was a private e-bike tour for me and my wife. The success of an e-bike tour depends on three things: Quality of the guide, rapport between guide and customers, and the quality of the bikes (there's a somewhat steep uphill to Park Guell). Our guide, Eddy from Gambia, is a wonderful, knowledgeable person who cared about teaching us. We learned so much about Barcelona and had a great rapport as he did not hesitate to answer our questions about his life and the challenges of immigration. As opposed to a previous e-bike tour from a different company, in which the bikes were weak and broke down twice, the bikes in this tour were of high quality with lots of power to get us up hills with no incident. This was a wonderful five star experience.
...Read more

Christi B
BARCELONA E-BIKE TOUR 360º - LAND, SEA & AIR | Jun 2019
Salvador and Marcos were wonderful guides as our family toured many of the sites all over Barcelona by bikes, boat and cable car. It was our 8 year olds favorite!!
...Read more

Pioneer68010053908
Barcelona E-bike Tour Camp Nou Experience | Jun 2019
This bike tour was perfect for my teenagers. Barcelona can be a ton of walking and riding an electronic bike is so much more fun. It's such a beautiful bike-friendly city. The bikes were easy to use. Giovanna was our guide and my family were the only ones in the tour. She was so informative and accommodating. This was probably our favorite excursion of our trip. Thanks Giovanna!!
...Read more

Really worth doing in Barcelona

Pioneer51824748229
Barcelona E-bike Tour Charms & Secrets | Apr 2019
We loved this trip, excellent guide who really knew his history and answered all the questions put to him. This is a great, fun way to see different parts of the city and save your feet for other activities!! We covered parts of the Park of the Ciutadella, the Gothic area, Borne district as well a beach front on a beautiful spring day. Highly recommended by all of us.
...Read more

Dream27193133458
Barcelona eBike Tour with Sagrada Familia + Audioguide in your language | Mar 2019
This tour and our guide Marco was the highlight of our trip to Barcelona. It was safe and easy to get around the city on e-bikes as the city is designed with bike lanes and traffic controls. We made efficient use of our time visiting multiple sights and really got a feel for the city. I highly recommend this tour and if your lucky enough to spend the day with Marco you will not be disappointed. He is knowledgeable and fun.
...Read more

This was the best way to see Barcelona...

This was the best way to see Barcelona and our travel guide was excellent. If I was to do this again I would not include the Goleta tour only the bike ride.

Fantastic guide, fun ride on the bikes, with lots of knowledge and guide that loved her job and her city. Bike was great, Tram was great, the boat was ok but it was NOT what normal person would call a catamaran I would recommend this tour !

Our tour guide Edie - amazing !!! We actually ended up biking for 3 hours with so much history and adventure. This was one of our favorite tours - we learned a lot of the history of Barcelona and hit all the sites of interest. This is a wonderful way of learning about the city.

A great way to see around, electric...

A great way to see around, electric bikes were super fun, no level of fitness required and Marco our guide was excellent.

EBikes are great! Lots of ground and...

EBikes are great! Lots of ground and info covered in a relatively short period of time.

This was a really cool tour! Our...

This was a really cool tour! Our tour guide didn't give us a ton of information on the tour and we would have liked more! The electric bikes were a cool feature and the sunset views were great!

This was a great way to see the...

This was a great way to see the city. We were the only ones on the tour. The guide was great! The access to Sagrada Familia was awesome as was the audio tour of the site. I would recommend this tour.