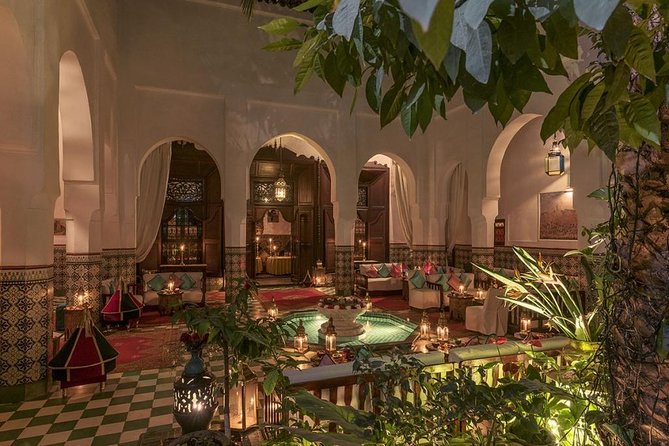 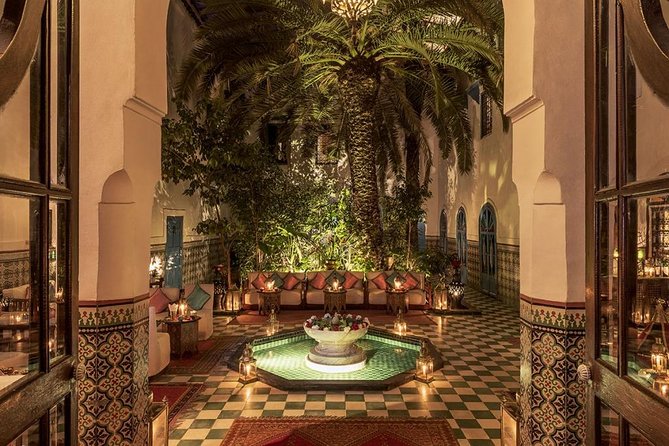 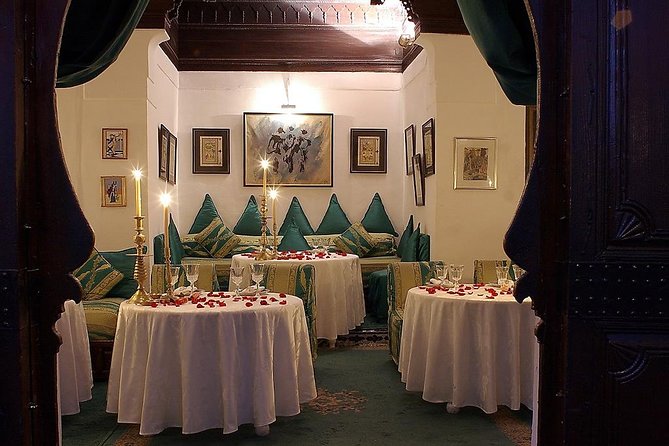 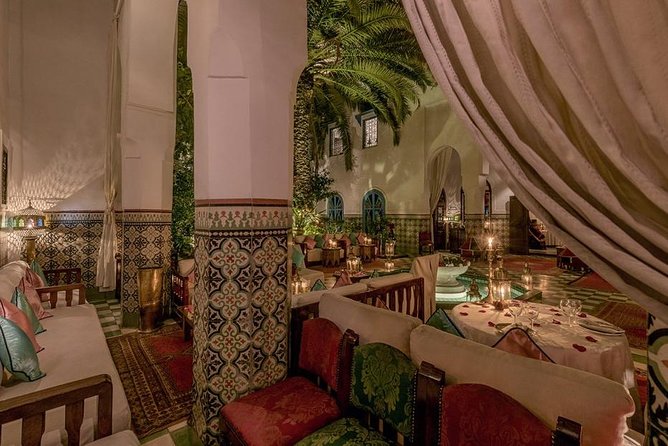 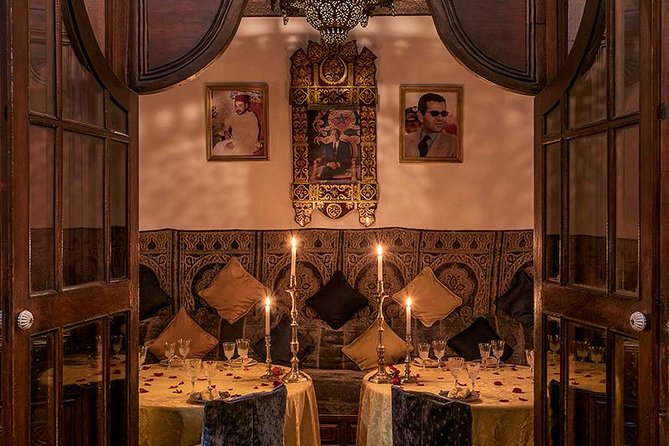 There are so many food choices in Morocco, you may miss out on a traditional experience if you choose just any old place to go. This Marrakech meal at a prestigious riad guarantees an evening of traditional Moroccan food combined with a cultural atmosphere. Along with a meal and drinks, enjoy a musical entertainment show after you’re escorted to a private table for comfort.

Taken for a ride!

cgordonjones
Palmeraie, Menara and Majorelle Garden- Private tour | Feb 2020
We visited just two gardens. The guide wanted to have us pay to tour the things we missed on the next day. We passed on that. About an hour to an hour and a half was simply driving around with little discussion.
...Read more

Laura L
Fantasia Moroccan Dinner and Show | Nov 2019
I was very disappointed by this show. Firstly when I arrived at the venue it was absolute chaos, there was no one checking tickets, just lots of confused tourists trying to work out where to go. Musicians playing loudly out of sync to get your attention. When I did eventually find where I was supposed to go (no thanks to the people that work at the venue) my food was appalling. There was no vegetarian starter despite me stating this as a requirement at the time of booking. The main meal was below average compared to other tagines I had had during my stay in Marrakech. The amount of food waste was enormous as the waiters kept bring out large trays of food despite saying no. It felt like they thought we were all gluttonous tourists. No one said that the show was about to start, I just assumed as there were other people sat at the arena. The actual show was terrible and mainly consisted of 5 people galloping their horses back and forth across the stage. The lighting was dim which I assume is for the horses but at times I could not see what was happening. They also simultaneously fired loud guns which I imagine if I had been sat at that end of the stage would be damaging to your ears, definitely distressing for young children My only positive was my lovely driver who despite our language barrier was able to help me navigate the carnage of an evening. I would not recommend this show to anyone as it is certainly not value for money
...Read more

Connector607314
Agafay Desert: Quad,4x4 Safari, Camel & Dinner Show | Oct 2019
Our tour guide never showed up for the trip and left us trying to get a refund from Viator, which is no easy task. The tour guide called two hours after the scheduled time to the riad after we made 3 attempts to contact and Viator 2 and told the riad owner that he had forgot about our scheduled trip. If you want to risk getting left in the desert with an irresponsible tour company this is the one for you.
...Read more

viancakatrien
Fantasia Moroccan Dinner and Show | Sep 2019
A lovely and amazing night to spend in ches Ali. A must try if you are in Morocco to experience the Moroccon culture. Show was good. Food was typical morrocon cuisine and way too much in abundance for a small group. A place worth going once
...Read more

FarAway18963310287
Atlas Mountain Berber Jeep Car | Apr 2019
The guides were amazing, a great one on one experience. Would highly recommend. The lunch stop off had breath-taking views -,couldn't fault a thing
...Read more

Craig B
Full Immersion in Marrakech Day Tour with Lunch | Apr 2019
Super friendly and knowledgeable guide made for not only a perfect day of sightseeing but also an education in the culture and history of the city and its people. Our family of 4 were joined by 4 other visitors so made it almost a personal experience. Had lovely lunch on a roof top terrace overlooking the city which made a nice surprise and restful break. There was plenty of time to explore on our own, take photos and soak up the atmosphere especially at the end of the day overlooking the Jamaa El-Fina Square as it came to life. Always felt safe and never troubled.
...Read more

DO NOT BOOK THIS TOUR

gabrielleka
Full Immersion in Marrakech Day Tour with Lunch | Mar 2019
I should have listened when I read the most recent reviews for this tour; however, as I always had a good experience with tours that I book through Viator, I decided to go for it. The tour guide was very rude. He would bring us (me and 6 other people) to a site and just disappear. He never presented himself to us. I had to ask him for his name mid-tour. He took us to a place to buy argan oil, and come to find out, the oil (which was expensive) was not pure argan oil. I didn't finish the tour and requested to go back to the hotel because it really was not enjoyable.
...Read more

This was the worst tour we ever took part.

Sightsee18867
Full Immersion in Marrakech Day Tour with Lunch | Mar 2019
From 9 to 12 three famous sights were visited, then lunch and the souks. Very little, practically no information was given on what we have seen. Recommended for those who want to travel in a van between sights instead of a taxi and want somebody else buying the tickets.
...Read more

SuperCUFC
Full Immersion in Marrakech Day Tour with Lunch | Jan 2019
I would not recommend this trip - having previously done a similar trip a few years ago which we thoroughly enjoyed we decided to do a similar trip with family who were first timers in Marrakesh. We booked an English speaking tour which was subsequently joined by another French speaking party. The tour was therefore primarily in French with snippets in English - at one point the guide spent 15 mins giving information in French and only 1.5 mins in English. Even my rudimentary French could make out that he was not giving same detailed information in English. I did point this out to him and he acknowledged it was difficult to keep two parties happy, however we had paid the same as the other party and expected a similar level of service.Lots of time waiting for buses - which is unnecessary as distance between sites is within easy walking distance. Lunch on terrace with views over city and Atlas Mountains was lunch in a room with no views - again our previous tour was in same restaurant on the terrace with the aforementioned views.The tour of the souk was being led through with very little information and those who had previously undertaken a similar tour were left to give information that we recalled from our last tour.All in all not a good experience if you want information on the monuments, history or culture of Marrakesh
...Read more

The BEST dinner show ever.

ErnstMeinhart
Full Immersion in Marrakech Day Tour with Lunch | Jul 2018
We very much enjoyed the city tour and lunch with Ismail, our tour guide. Ismail was very knowledgeable and friendly and spoke excellent English, which was easy to understand! Ismail is very personable and represented Morocco in a very honorable fashion!!!
...Read more

I would not recommend this trip. The...

I would not recommend this trip. The guide only took us to shops where he was getting a backhander. Not worried when he lost a lone female group member in the souk.

Overall the locations were beautiful...

Overall the locations were beautiful however our tour guide was underwhelming. He almost lost 2 people from our tour group, constantly repeated himself, and didn't pause long enough at key photo opportunities and too long in locations that weren't that meaningful.

First we were told to meet our guide...

First we were told to meet our guide at a place we couldn't find on google, when we contacted them for directions they said it wasn't on any map and we should ask at our Riad - why arrange to meet somewhere that isn't on any map? Our Riad had no idea where it was either. Fortunately we did manage to change the meeting place but it was stressful at the last minute.
The morning was mostly ok going to the places we expected and lunch was at a typical tourist restaurant which was fine. Unfortunately the guide was more interested in 'shopping' and getting commission first a cake shop with 10 Euro cakes - just a quick stop outside so not really a problem but then we were shut in a room while they tried to sell us all spices and oils, then we were taken to a Riad and a random museum which I wasn't expecting and seemed pointless particularly as we were staying in a Riad. We were taken through the souks and told we weren't allowed to buy anything we had to buy at the shop he was taking us to. This got even worse when we were then told we would have to spend half an hour in the shop. I had only booked this tour as I believed it included the Majorelle Gardens as did another couple on the tour this seems to have disappeared from the itinerary listed now and when I realised we wouldn't be going and and would instead be spending half an hour in a shop so the guide could get commission we promptly left and had to get a taxi ourselves to the gardens.