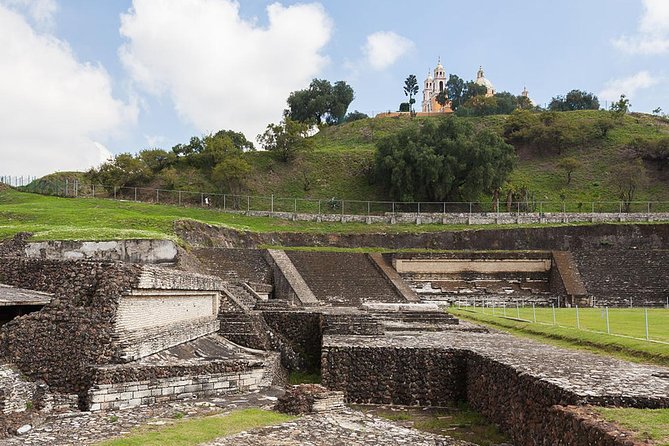 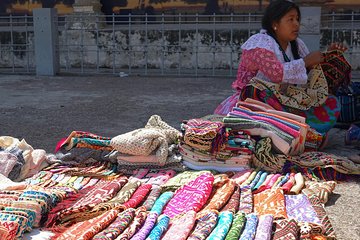 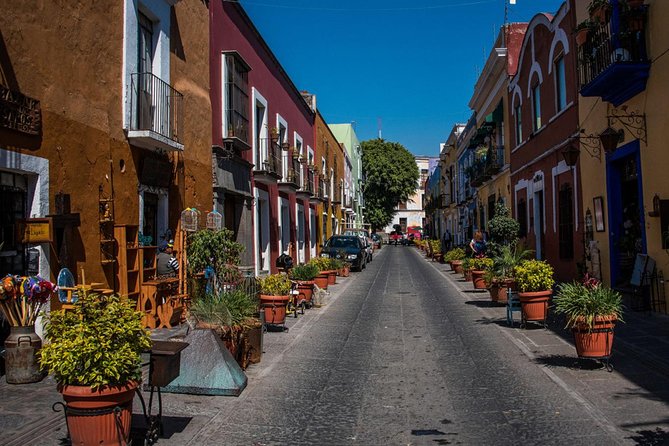 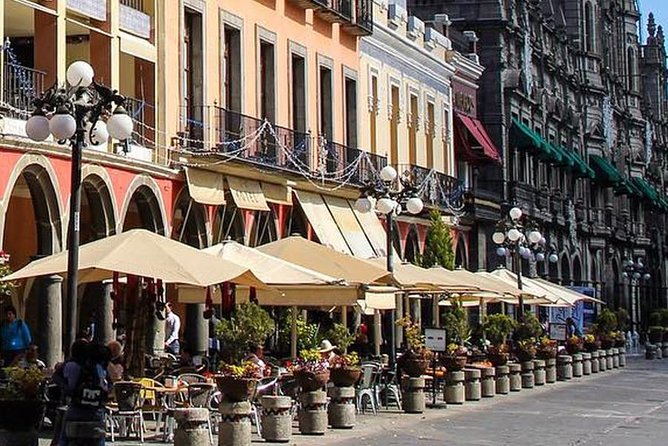 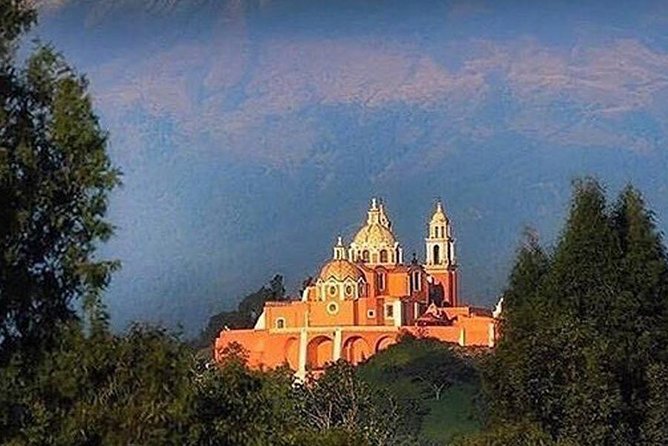 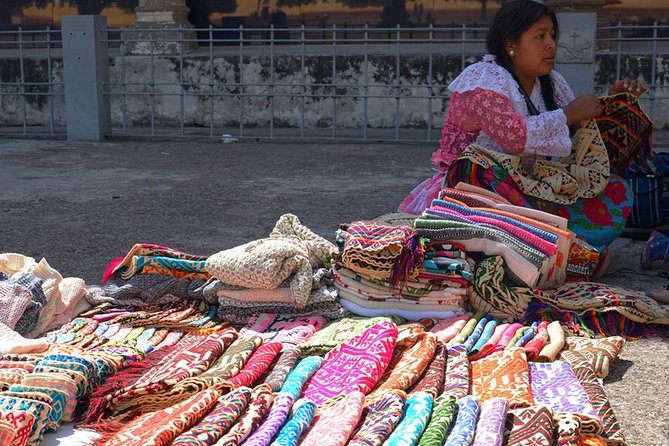 Puebla is often said to be one of the most beautiful cities in Mexico and is packed full of sights. Ensure you don't miss a thing by joining this tour from Mexico City that takes you to see such archaeological wonders as the Great Pyramid of Cholula and discover why Puebla is world-famous for its food and traditional artistic pottery.

3.0
1 Review
5 stars
4 stars
3 stars
2 stars
1 star
Reviews by Viator travelers
Puebla/Cholula
bbudds
, Feb 2020
Puebla and Cholula are beautiful. While we enjoyed the churches we saw, it would have been nice to see some other sights. Our guide was pleasant but not overly interested in teaching us about much other than the churches.
... MoreLess

Maru
Teotihuacan Pyramids and Shrine of Guadalupe | Mar 2020
Very good experience. We spent sufficient time on the pyramids and the shrine and as an extra we visited the square of three cultures. Our guide Fernando was very knowledgeable. Food was also good.
...Read more

Honeykid
Glass Bottom Boat departing Cozumel | Mar 2020
Our guide,Isa, was great. He made my 10 yo daughter feel safe. By the last jump, she was off on her own! Staff at launch site we're friendly and accommodating. Columbia Reef was cool but the others were short
...Read more

Melissa_G
Teotihuacan Pyramids and Shrine of Guadalupe | Mar 2020
Nothing about the tour that I actually got was what was promised when I purchased tickets online. I was picked up at 8:46am for a tour that supposedly started at 8am. And there were 2 other pick ups after us. The vehicle was a minivan, not a "coach" as promised. The "what to expect" indicated that there would only be two stops: the Teotihuacan Pyramids and Shrine of Guadalupe, and a stop for lunch. Instead, we stopped at the Square of Three Cultures (which I saw as a positive bonus), and then a half hour at a goldsmith's shop where they sold jewelry to tourists. Once we reached the Teotihuacan Pyramids, we were told we would only be there for 2 hours, instead of 4 hours as the information online promised. We had to argue with the guide to give us more time there, and he eventually agreed. At the pyramids our guide gave us a 20 minute introduction at the entrance and then left us to explore the site ourselves, when I had understood that he would be accompanying us around the site and providing a "guided tour" as other tour guides seemed to be doing. We had negotiated getting our own lunch at La Gruta (recommended) and so we were picked up at the pyramids after 4 hours there and then driven to the Shrine. At the Shrine, the guide asked us how long we wanted to be there, we said an hour (as the online information had promised), and then told us to meet back at the van in an hour. There was no guided tour provided at all. And then we were driven back to our hotels. I arrived home at 7pm. So when they say it's an 11 hour tour, this is what they mean. It would've been a lot cheaper for us to just arrange transportation ourselves through Uber, pay the 80peso admission to the pyramids, and visit the free on-site museum (which the guide didn't mention) for additional information. It's unfortunate, because our guide seemed very knowledgeable and spoke English well.
...Read more

NCJ
Teotihuacan Pyramids and Shrine of Guadalupe | Mar 2020
Very friendly guide, but we wasted a lot of time in gift stores on the way. We ended up arriving at the worst possible time (i.e. the middle of the afternoon with the highest heat and largest crowds). I would not take this tour again.
...Read more

Rachel_H
Teotihuacan Pyramids and Shrine of Guadalupe | Feb 2020
Raul was a wonderful tour guide! Made everyone on the tour feel included and very knowledgable. Around two hours at the Pyramids which I found to be ample followed by lunch near by. Raul was very conscious about sticking to the itinerary meaning no time was lost.
...Read more

I will never booked any tours with Discova

Letty
Teotihuacan Pyramids and Shrine of Guadalupe | Feb 2020
Our tour was not as described at all. Started with the change of time. They arrived at 9:35am. We booked an English tour and there was not an English speaking tour guide. They also change the schedule of events and we spent more time at there gift shops than the actual attractions.
...Read more

Sarah_H
Horseback Riding near Cancun | Feb 2020
Great hosts and beautiful ride through the mangroves and near the beach. Horses were well mannered and you could basically ride them with no reins.
...Read more

tecumsehdog
Cozumel Airport Round Trip Transfers | Feb 2020
Big mess right from the beginning they payed when we got there to bring us to the resort from another service was told to call them when were going to return to the Airport well I did no answer it's better to get a cab and cheper then used this service
...Read more

Great experience with a great guide!

briancharlescox
Teotihuacan Pyramids and Shrine of Guadalupe | Feb 2020
The tour was excellent all around! We were not rushed, the pyramids were truly amazing, and our tour guide (Montse) was very friendly, knowledgeable and fun. Definitely recommend!
...Read more

Teotihuacan Pyramids and Shrine of Guadalupe

jack
Teotihuacan Pyramids and Shrine of Guadalupe | Feb 2020
We were picked up at the hotel within the time range expected, the van tour was clean and comfortable, tour guide (Jose) who was the driver as well was knowledgeable and giving useful information stating from sitting in the car till the end, drove safely.
...Read more

beth
Puerto Vallarta City Tour | Jan 2020
The tour included a variety of sights, some walking and stops for shopping. The tequila tasting was fun and lunch was plentiful and well flavored. The stop for lunch was at the set for the Predator movie and offered some the option to hike, zip line and walk/swim in a stream. The guide was bilingual and informative and he kept track of all of his tour guests nicely. The windows on the bus were dirty and it was showing some wear and tear. The temp control on the bus was good.
...Read more

Freedom56072234884
Horseback Riding near Cancun | Jan 2020
This experience was very good. we had a great time, Lots of fun. I will definitely do this again when I go back to Cancun
...Read more

Meander480076
Puerto Vallarta City Tour | Jan 2020
Tour, shopping & restaurant great. Road to Restaurant was dangerous in the rain & Bus had flat tire!
...Read more
|
Reserve Now & Pay Later
We'll reserve your spot today, and you can cancel up to two days before your experience without making a payment. Secure your spot with ease, stay flexible, and never miss out.
How it works
Find your experience
Choose the experience you want knowing you can secure your spot without being locked in.
Make a reservation
Reserve now and pay later to secure your spot, commitment-free.
Choose when to pay
Come back to pay once your plans are set, or let auto-pay kick in two days before your experience.
Enjoy your experience
Now you're all set! Have a great time.
Frequently Asked Questions  | Terms & Conditions
Reserve Now & Pay Later
Secure your must-do activities without being locked in
Learn More