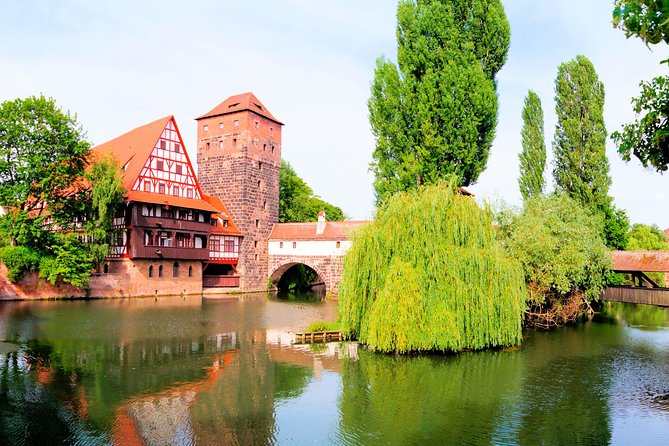 Visit the magnificent, medieval city of Nuremberg, Germany—featuring a trip to the Nazi party rally grounds—on this private, guided sightseeing tour. Choose from multiple tour durations, then enjoy personalized attention while learning about the history of the city, from the days of the Holy Roman Empire to the German Renaissance, Third Reich, Nazi rallies, and Nuremberg Trials. See German Renaissance artist Albrecht Dürer's house, the Imperial Castle courtyards, plus the central market and more. Hotel pickup and drop-off is included.

Combine WWII stories with history from Nuremberg’s Middle Ages as you explore with a private guide.

This private tour begins with a hotel pickup in Nuremberg. Meet the guide for you tour and then roam through the city’s Old Town, admiring the beautiful timber-framed houses and cobblestone streets. Marvel at the massive City Walls of Old Town Nuremberg, which still run for approximately four kilometers.

Behind the walls, walk past the Craftsmen's Courtyard, where glass cutters, leather workers, gold and silversmiths, stained-glass painters and other artisans offer their wares for sale. See the gothic St. Lawrence Church, which was rebuilt after World War II; Nürnberger Christkindlesmarkt, Germany’s most famous Christmas market; plus Town Hall, German Renaissance artist Albrecht Dürer's house, and the Imperial Castle courtyards, to name just some of the attractions.

Along the way, learn about the history of this beautiful and prosperous city—as the center of the Holy Roman Empire, to the days of the German Renaissance, the Temple City of the Third Reich, and the home to both the Nazi rallies and Nuremberg Trials.

See where German Emperors were crowned and where saints are buried. Find where the most famous and talented German artisans in history created their awe-inspiring works and where the colorful and lively markets have taken place for almost 700 years.

After a lunch break (own expense and depending on the length of tour chosen), head out to see the Nazi party rally grounds. Discover the Great Street, designed by architect Albert Speer to be the central axis of the rally grounds, and the half-finished Congress Hall of the Nazi Party, a building Hitler planned to use for party meetings. There’s also the largest Third Reich buildings, where Hitler inspected members of the SS, and the Documentation Center, a museum with exhibits on vital wartime and post-war events, like the Nuremberg Trials.

This private tour is a customized experience, so be sure to include any specific requests and desired attractions to the guide at any time.

The tour concludes with a hotel drop-off in central Nuremberg.

The original house of the famous renaissance artist.
1

The marketplace has been the city center since the 1300's.

Q:What is the policy on sanitization during Nuremberg Private Walking Tour with Medieval Old Town and Nazi Rally Grounds?

See all safety measures taken by Nuremberg Private Walking Tour with Medieval Old Town and Nazi Rally Grounds.
Reviews
4.5
20 reviews
Total review count and overall rating based on Viator and Tripadvisor reviews
0
0
0
0
0
Reviews by Viator travelers
Showing 1-10 of 20 reviews
Great Customizable Tour
Bobby_S, Oct 2021
Expensive but excelent tour to see the sights of Nuremberg. Our tour guide was very knowledgeable and patient. We really enjoyed that it was customizable and we got to see all of the things we wanted to see.
1 traveler found this review helpful
Excellent
Donna_C, Oct 2021
Natasha met us at our hotel lobby. She spoke perfect English and was so very knowledgeable and informative! I would highly recommend her.
Tour of Nurmberg by Natasha...
Dennis_F, Sep 2021
Thank you to Natasha, our tour guide. We visited the old Nazi Rally Grounds and Old Town. Natasha is very informed regarding the history of Nurmberg as well as some of the current events affecting the city and the region. Danke!
Good tour
Eugene_C, Aug 2021
Natasha is a great guide, and we felt very comfortable with her. We took a 3-hour tour because of time constraints, but I strongly recommend taking 4 hours. There is so much to learn.
1 traveler found this review helpful
We’ll worth the trip
Michael_W, Jun 2021
The Nuremberg 3 hour old town and rally sites tour was well worth the trip. Natasha was extremely knowledgeable and a great guide. My family enjoyed the entire tour. She answered all our questions and gave us great after tour recommendations to explore as well. Highly recommend the tour.
Private Tour: Nuremberg Medieval Old Town and Nazi Rally Grounds Walking Tour
Joseph_S, Dec 2019
3 hour walking tour was perfect for Nürnberg. Our guide Jason was knowledgeable and fun and catered to our likings
1 traveler found this review helpful
Great Private Tour!
Karen_E, Sep 2019
My 25 year old daughter and I did the Nuremberg 4 hour private tour with Natasha. As we were staying in Rothenburg ob der Tauber, we took the train to Nuremberg and met our guide at the station. Natasha was wonderful, and Nurnberg is a lovely town! She took our time with us, showed us the old town first, then we had a leisurely lunch (entirely up to you - quick take away lunch, but I prefer a sit down with Nurnberger sausage and beer), before heading to the Nazi Rally Grounds. Those are something to see - you can just picture Hitler standing there on the podium and it's quite eerie. We definitely went over the four hours, but Natasha was quite happy to take her time with us. After we got back to the train station, she helped us book our tickets back to Rothenburg, which took a bit of time. She felt more like a friend than a tour guide and we really appreciated her! I'll probably be doing private tours from now on!
This was an amazing tour! Our tour...
Natalie_M, Jan 2018
This was an amazing tour! Our tour guide was Achim and he was incredibly knowledgeable about Nuremberg's history. Achim told our group about the history of the city, funny anecdotes, and provided pictures of historical figures and Nuremburg at different points in history. He was very well prepared and could answer any question our group asked. The place Achim recommended for lunch was fantastic and we learned more about Nuremberg culture. He knew the ins and outs of the city's transportation system - busses, trolleys, and subways. Achim's tour of Nuremberg was my family's favorite part of our trip to Germany - highly recommend this tour for anyone visiting the city. Even history buffs will learn new things about Nuremberg's fascinating history.
1 traveler found this review helpful
My family really enjoyed the...
amarquisfisher, Nov 2017
My family really enjoyed the afternoon with Jason. He asked and listened to what we were most interested in doing. He was super knowledgeable and friendly. We saw the Courthouse and were able to go in the rally grounds and the documentation center. We only spent a brief amount of time in the Old Town, but that was our choice. Highly recommend the tour and Jason as the guide.
We had been to Nuremberg on a Viking...
Ronald_S, Sep 2017
We had been to Nuremberg on a Viking tour and wanted a more in depth tour of this city and its WW2 sites, Chris was amazing, and one of the most knowledgeable people I have ever met! We would highly recommend this to anybody!!