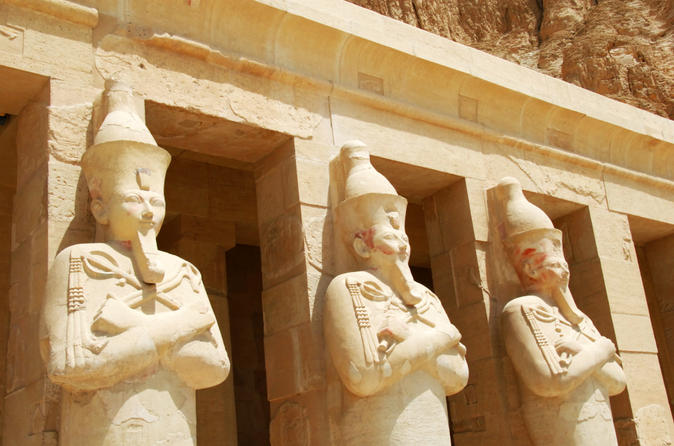 Visit Egypt’s most iconic sites on a private tour to Luxor with a flight from Sharm El Sheikh, and take in stunning aerial views of the Nile. Slip inside ancient tombs in the Valley of the Kings, pass through a gauntlet of sphinxes to the restored Hatshepsut Temple, and discover vivid reliefs on the broad middle terrace. Explore rambling ruins at the Temple of Karnak and take in Luxor Temple’s imposing obelisks, pillars and statues before boarding a return flight to Sharm El Sheikh.

Valley of the Kings
The king's formal names and titles are inscribed in his tomb along with his images and statues. Beginning with the 18th Dynasty and ending with the 20th, the kings abandoned the Memphis area and built their tombs in Thebes.

Hatshepsut Temple
A tree lined avenue of sphinxes led up to the temple, and ramps led from terrace to terrace. The porticoes on the lowest terrace are out of proportion and coloring with the rest of the building. They were restored in 1906 to protect the celebrated reliefs depicting the transport of obelisks to Karnak and the birth of Queen Hatshepsut. Reliefs on the south side of the middle terrace show the queen's expedition by way of the Red Sea to Punt, the land of incense.

Karnak Temple
Although badly ruined, no site in Egypt is more impressive than Karnak. It is the largest temple complex ever built by man, and represents the combined achievement of many generations of ancient builders. The Temple of Karnak is actually three main temples, smaller enclosed temples, and several outer temples located about 3 kilometers north of Luxor on 100ha (247 acres) of land.

Luxor Temple
The Temple of Luxor was the center of the most important festival, the festival of Opet. Built largely by Amenhotep III and Rameses II, the temple's purpose was as a setting for the rituals of the festival. The festival was to reconcile the human aspect of the ruler with the divine office.
Read MoreShow Less
Hotel Pickup
This experience is eligible for hotel pickup. Once your purchase is complete, you’ll be able to coordinate pickup details directly with your operator.
Read MoreShow Less

Category
Price Match Guarantee
We guarantee the lowest price on all 200,000+ experiences we sell. If you find the same product cheaper within three days of booking or while you're in your destination, we'll refund the difference.
It's Easy To Do