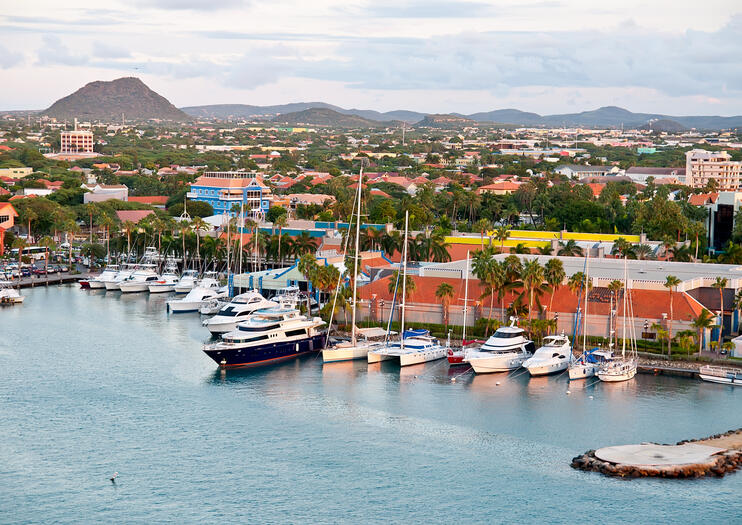 In the southern Caribbean Sea sits the island of Aruba, one of four constituent countries that form the Kingdom of the Netherlands. Its dry climate and reliably warm weather make it a popular destination for cruise passengers who come to golf, dive, snorkel, and soak up the sun.
The Basics
Plan to spend your time outdoors when docked in Aruba. Get an island overview during an off-road Jeep safari, which typically cover Arikok National Park, the California Lighthouse, and Natural Bridge; ride solo or double on an ATV tour of the north coast; go horseback riding to a secluded beach; or head out on the water for a day of snorkeling, scuba diving, or kayaking in the Caribbean waters.
Popular points of interest on the island include the Butterfly Farm, Eagle Beach, Natural Pool, and the Ayo and Casibari rock formations.
Things to Know Before You Go
How to Get to Oranjestad from Port of Playa
Most cruise lines dock at Port of Playa. Downtown Oranjestad is only a ten minute walk from the pier. The bulk of businesses are concentrated around the Caya G. F. Betico Croes, or Main Street. Taxis are readily available at the dock.
Port Information
Although the official language of Aruba is Dutch, most locals speak English and Spanish as well. The official currency is the Aruban Florin, but US dollars are accepted everywhere and ATM machines are conveniently located around the island. The cruise ship terminal has an information center, ATM, and souvenir shop.
Address: Oranjestad, Aruba
Read MoreShow Less