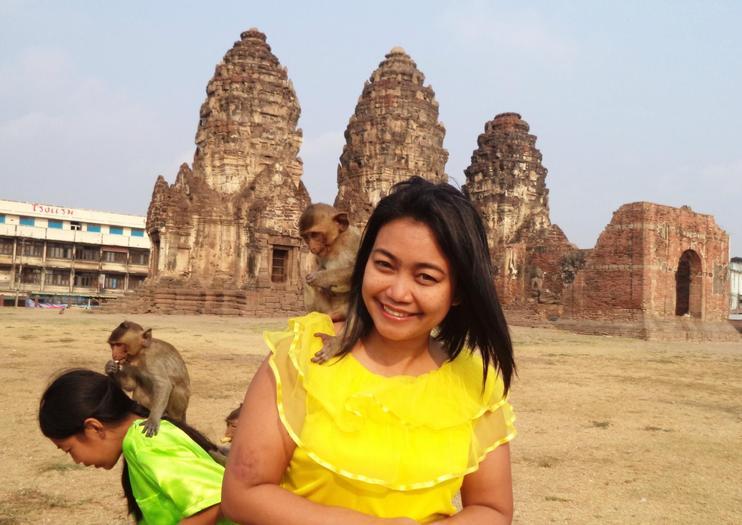 Situated 150 kilometers north of Bangkok, Lopburi is one of the oldest cities in Thailand, dating back to the Dvaravati period when it was known as Lavo. The influence of the Khmer empire is particularly evident throughout the city, but it reached the peak of its commercial, cultural, and political importance when the seventeenth century Siamese King Narai made it his second capital.
The ruins seen in Lopburi today are mainly from this era, including the large palace on the Lopburi River. Narai was also responsible for restoring many of the Khmer temples, as well as various monuments that he restored and transformed into Buddhist shrines.
Today, hundreds of monkeys have made some of the major ruins of Lopburi their home. These macaques have become as much a part of the city as the ruins themselves, but it’s wise for visitors to stay on their guard as they will steal cameras, small bags, and, in particular, anything that remotely resembles food!

The easiest way to reach Lopburi is by train, with regular services departing from Bangkok's Hua Lamphong Station daily. The journey takes between two to three hours, depending on the train. There are also regular bus services that depart from the Northern Bus Terminal in Bangkok and a mini-van service that leaves from near the Victory Monument.
Address: Lopburi, Thailand
Read MoreShow Less

2 Tours and Activities to Experience Lopburi

6
Instead of joining a crowded bus tour and rushing from one ruin to the next, give yourself the opportunity to really experience the quiet and tranquility of some of Thailand’s significant historical and religious sites on this full-day private tour. Visit these sites with only your guide and the people you’re traveling with, marveling at the ancient Khmer temples and Buddha statues on display. In particular, explore the numerous significant temples that are still standing in Ayutthaya Historical Park, a UNESCO World Heritage Site.
…More
From
US$ 190.92
Price varies by group size
From
US$ 190.92
Price varies by group size

In and around Bangkok Private Tour Guide with Custom Experience

183
Explore Bangkok with your very own tour guide during this full-day tour. Customize your own itinerary and visit Bangkok’s main attractions and some hidden gems. See the Grand Palace, Wat Arun, Wat Pho, the floating market and much more and get around using the city’s incredible public transport system. Experience Bangkok like a local and discover the best the city has to offer.
…More
From
US$ 55.21
Price varies by group size
From
US$ 55.21
Price varies by group size
Face masks required for travelers in public areas
Face masks required for guides in public areas
Social distancing enforced throughout experience
Learn More
Taking safety measures

Things to do near Bangkok