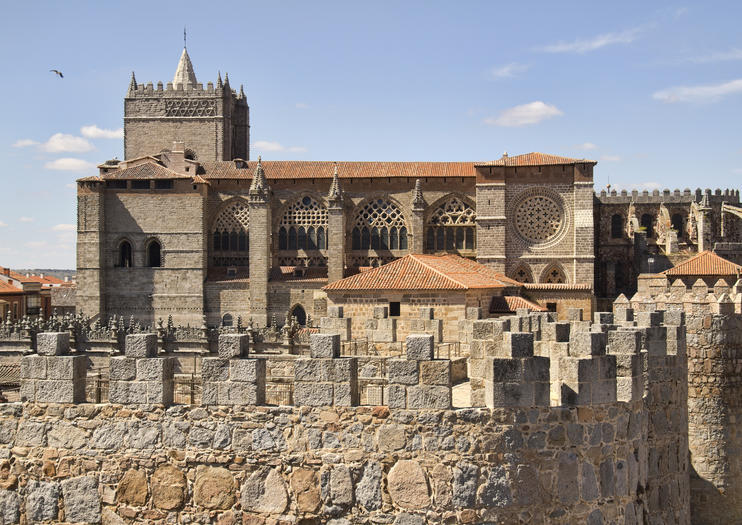 Built in the twelfth century as the first Gothic cathedral in Spain, vila Cathedral was integrated into the medieval city wall, making it look as much a fortification as a church.  Laid out in the shape of a Latin cross, the church exhibits both Gothic and Romanesque architectural elements. The interior stained glass windows date back to the fifteenth century, while the cloister and choir were added in the sixteenth century.
Art aficionados will find several notable works within the cathedral, including Vasco de Zarza’s masterpiece "El Tostado" (The Parched One).

Explore the city of Avila with a private guide during this half-day walking tour. Personalize the itinerary according to your interests and visit popular landmarks including the medieval walls and the cathedral. See the city through the eyes of a local and learn about Avila's history and culture.
...  More
From
US$ 156.57
Price varies by group size
From
US$ 156.57
Price varies by group size
Learn More

1
Enjoy this tour that takes you on an escape from Madrid towards Avila. Your guide will meet you in Avila and you will get to enjoy the best monuments and sites of Avila´s. Get to know Avila and it´s most important sites, like it´s walls, cathedral and the famous four posts. This tour can also be customized to meet all of your sightseeing needs.
...  More
From
US$ 349.28
Price varies by group size
From
US$ 349.28
Price varies by group size
Learn More

Avila from Salamanca with drop off in Madrid

Leaving from Salamanca, visit Avila on this tour with an expert bilingual guide. You will learn about the legends and history of this city, which was declared a World Heritage Site in 1985. The tour will end in Madrid, so is perfect if you are staying in Salamanca and want a transport to Madrid
...  More
From
US$ 77.00
From
US$ 77.00
Learn More

Enjoy this tour that takes you on an escape from Madrid towards Avila and Salamanca. Your private driver will pick you up at your desired time in your hotel or place of choice in Madrid. Once in Avila you will meet your private guide and you will get to enjoy the best monuments and sites of Avila. Such as it´s walls, cathedral and the famous four posts. This tour can also be customized to meet all of your sightseeing needs. You will have some free time in Avila before continuing your private tour to Salamanca. Once in Salamanca you will meet your private guide for a 3 hour guided tour of the city, including the entrance fee to the University. Stroll around its wonderful streets and visit Plaza Mayor, one of the most beautiful in whole Spain. You will of course have some free time in Salamanca before driving back to Madrid.
...  More
From
US$ 650.38
Price varies by group size
From
US$ 650.38
Price varies by group size
Learn More

More Tours in Castile and León

Things to do near Castile and León

Recommended for Castile and León