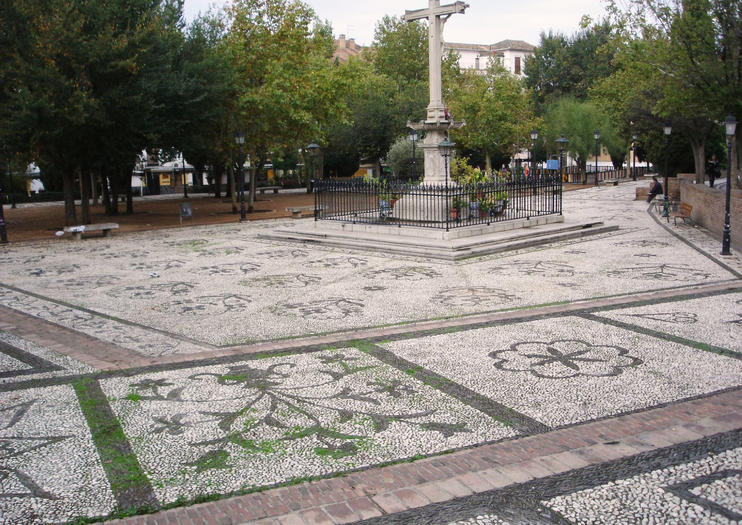 Campo del Príncipe—the Prince’s Field—is said to be named for Prince Juan, whose late-15th-century wedding was supposed to be celebrated here (but wasn’t). Today the square is known as a pilgrimage destination during Holy Week, when its 17th-century white alabaster Cristo de los Favores cross serves as the main draw.

The Basics
Year-round, people come to humble Campo del Príncipe to enjoy the many tapas bars that surround the square, while kids play on the playground. Thanks to its historic cross and traditional Andalucian pebble-cobbled street, the campo has a special allure. It’s considered one of the most important places in the Realejo neighborhood, once the city’s Jewish quarter, and is a stop on the hop-on hop-off train that travels around Granada.

How to Get There
Campo del Príncipe is a short walk from other major Granada sights, such as the Alhambra (which is about 15 minutes away) and the Albaicín. You can also access the plaza on the C35 bus line, and the city’s hop-on hop-off train stops there as well.

When to Get There
The most popular event of Holy Week takes place on Good Friday in Campo del Príncipe, when worshippers gather before the Cristo de los Favores cross to say prayers, followed by a moment of silence and the petition of three favors. There are also religious processions throughout Granada at this time.

Bib Rambla
Another, and perhaps more popular, gathering spot for locals and visitors, Bib Rambla is a square in the center of Granada with a marble fountain of the Roman god Neptune and plenty of shops and cafés where you can grab churros, espresso, and tapas. The plaza is especially popular on warm summer nights.
Address: Plaza Campo del Principe, Granada, Andalucia 18009, Spain
Read MoreShow Less

Tour Realejo and Gardens of the Alhambra

1
El Realejo is a neighborhood of the city of Granada located in the old town, at the foot of the Alhambra. It is one of the most special and charming areas of the city. Having the opportunity to see the city in a means of transport such as the Tuk Tuk generates a unique experience. While you are contemplating the best views of the city of Granada, our guide will tell you history of the places where you pass, you can get off and take pictures. You can also enjoy a cup of tea along the way.
…More
From
US$ 86.07
per group
From
US$ 86.07
per group

Private Tour in Tuk Tuk on the Origin of Granada

Learn how it all started. A tour where you will visit the origin of Granada, from the Realejo through the Alhambra, seeing its most emblematic parts and then entering the most iconic neighborhoods of the capital El Albaicin and Sacromonte, immersing ourselves among its streets, squares and viewpoints without forgetting the magnificent caves loaded with History, centuries and Flamenco
…More
From
US$ 56.15
per group
From
US$ 56.15
per group
Face masks required for travelers in public areas
Face masks required for guides in public areas
Face masks provided for travelers
Learn More
Taking safety measures

Things to do near Granada