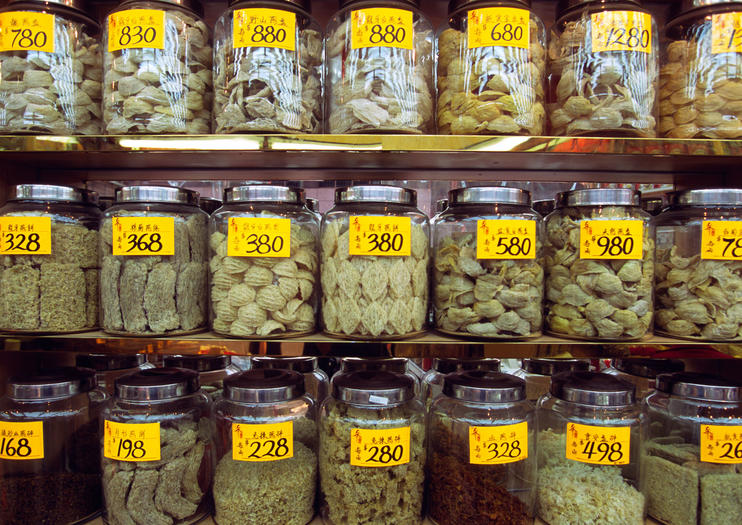 Get a glimpse of old Hong Kong in the unusual shops and markets along Bonham Strand. Located in Sheung Wan on Hong Kong Island, Bonham Strand is known for its large concentration of shops selling traditional Chinese medicine, herbal remedies, as well as dried seafood and other exotic animal products.

The Basics
Bonham Strand runs between Queens Road West and Wing Lok Street. Many Sheung Wan walking tours stop at Bonham Strand, as well as other nearby attractions, such as Cat Street, and Man Mo Temple. For the best value, combine a Sheung Wan walking tour with a Hong Kong Island guided tour and see attractions like Victoria Peak, Aberdeen, and Stanley Market. Or join a hop-on hop-off bus tour to explore Hong Kong at your leisure.

How to Get There
Bonham Strand is located in Sheung Wan. The closest MTR stops are Sheung Wan, Central, and Hong Kong Station. A number of buses and minibuses stop nearby, including bus Nos. 5B, 6, 101, 113, N170, and 282. The tram also stops nearby.

When to Get There
Bonham Strand can be visited year-round. Most of the shops are closed Sundays and public holidays. Bonham Strand can be explored in less than an hour, and most visitors will combine a visit here with other stops nearby in Sheung Wan and Central.

Western Market
Located near Bonham Strand is the historic Western Market, one of the oldest buildings in Sheung Wan. This Edwardian-style building features a distinctive red brick façade and houses a number of shops selling fabric, arts and crafts, artwork, antiques, and souvenirs. There are also a few cafés and restaurants.
Address: Bonham Strand, Hong Kong, China
Read MoreShow Less

35
This private walking tour showcases the best of Old and New Hong Kong and allows travelers to truly immerse themselves in the culture, history and traditions of this diverse land. Your expert English-speaking guide will lead you through old-school markets and rare antique shops, then take you to the hub of commerce in this bustling city, where skyscrapers and modern buildings line the streets. Your guide will lend insight into how traditional ways meet contemporary culture as you explore Hong Kong.
…More
From
US$ 106.00
Price varies by group size
From
US$ 106.00
Price varies by group size
Face masks required for guides in public areas
Face masks provided for travelers
Hand sanitizer available to travelers and staff
Learn More
Taking safety measures