Exploring the Traboules of Lyon 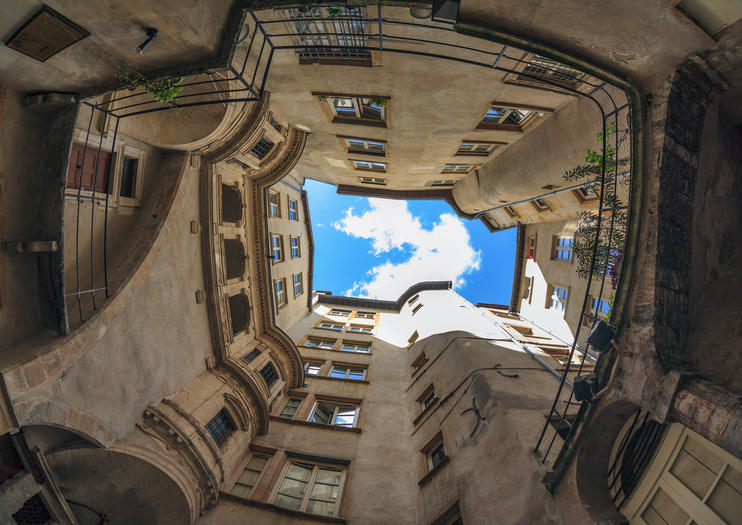 Once used by silk merchants to reach the bustling markets of Lyon without damaging their wares, the city's traboules, or passageways, hark back to a bygone era. Here's how to escape the city streets and explore these hidden, secret alleyways.
Lyon Traboules History
The traboules of Lyon date back to the fourth century, when residents of what's now known as Vieux Lyon needed swift and simple access from their homes to the banks of the Saône River for water. Come the 18th century, Lyon's silk-weaving industry boomed and the traboules also became the perfect way for silk workers—known as canuts—to transport their products from their homes on the outskirts of town to the markets in the new city center on the Presqu'ile, between the Rhône and Saône rivers. Still in place today, the passageways offer access to many of Lyon's residential apartment buildings, with some 40 of them open to the public.
Ways to Experience Lyon's Traboules
Read MoreShow Less
Lyon Tours & Activities (5)
Filter
•

51
Tour and taste your way around Lyon on this half-day Old Town food tour. Save hours researching where to find the best local food, and instead, have insider knowledge from your guide. Meet local producers, and learn about Lyon’s wonderful gastronomy scene. You won’t have to worry about translation problems—your guide translates for you, as you enjoy several tastings throughout the day.
...  More
From
US$ 90.02
From
US$ 90.02
Learn More

145
The perfect introduction to France’s history-filled city, this hop-on hop-off tour of Lyon makes stops at several attractions. Enrich your visit with audio commentary in multiple languages as you listen to anecdotes about the city, its people, and its heritage. Your pass is valid for the whole day, so you can get down—and back on—as many times as you’d like.
...  More
From
US$ 25.20
From
US$ 25.20
Learn More

Discover Lyon’s famed gastronomy with this private half-day culinary walking tour. Follow your guide to explore different neighborhoods and taste cheese, chocolate, and wine. Learn about the city’s culinary history including its bouchons (small, traditional restaurants). Visit Halles Paul Bocuse and taste several local specialties at one gourmet market.
...  More
From
US$ 480.08
per group
From
US$ 480.08
per group
Learn More

16
During this storytelling tour, your guide will immerse you in the magical atmosphere of the Renaissance. The imminent arrival of King Henri II and the festivities which are being prepared, the prestige and the know-how of the Lyon printers, but also the settling of scores and the intrigues. You will follow the adventures of Catherine, a printer woman and her fight to save her family printing press. Thrills guaranteed! This visit is ideal for discovering Vieux-Lyon and its history in a fun and original way. The visit is suitable for the whole family from 10 years old! The visit is in French only.
...  More
From
US$ 18.00
From
US$ 18.00
Learn More