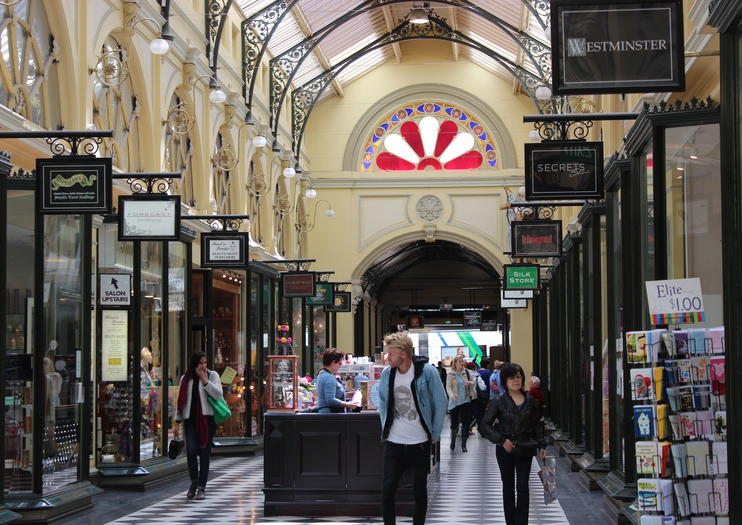 Opened in 1892, the Royal Arcade is Melbourne’s oldest shopping arcade. It’s a visual feast, with a lofty glass ceiling that streams natural light onto the delicate Victorian metalwork, and home to a choice selection of boutiques, jewelers, chocolatiers, and cafes.
The Basics
A walking tour of Melbourne’s scenic laneways and historic arcades is a popular choice for visitors to the city. Exploring the maze-like streets with a guide will ensure you don’t get lost. Walking tours that include the Royal Arcade are often combined with other top Melbourne attractions such as a visit to Queen Victoria Market, a view from the Eureka Skydeck, or even a trip out to Phillip Island to watch the Penguin Parade.
Things to Know Before You Go
How to Get There
The Royal Arcade is located in the heart of downtown Melbourne, within easy walking distance of landmarks such as St. Patrick's Cathedral and Federation Square. There are entrances to the arcade on Little Collins Street, Bourke Street, and Elizabeth Street. The closest tram stop is Bourke Street Mall (lines 86 and 96), and it’s just three blocks from Melbourne Central train station.
When to Get There
The arcade is open daily, and it’s almost always busy, especially during the summer months of December and January. The most atmospheric time to visit is during the Christmas season, when the arcade is adorned with festive decorations.
Architecture of the Royal Arcade
The Royal Arcade is the work of acclaimed architect Charles Webb, whose other masterpiece is the Windsor Hotel on Spring Street. Renowned for its Italianate style, the arcade is characterised by high arches, dramatic glass and wrought iron ceiling, and lavish gold trims. The memorable centerpiece is Gaunt’s Clock, flanked by gigantic statues of mythical gods, Gog and Magog, who strike the clock each hour. Additional highlights include the Victorian-era glass shopfronts and the grand Renaissance Revival-style entryway on Bourke Street.
Address: 335 Bourke Street, Melbourne, Victoria 3000, Australia
Read MoreShow Less

292
Explore Melbourne’s charming laneways and opulent arcades on a small-group walking tour. Uncovered tucked-away gems like specialty boutiques and local fashion designers, and savor Melbourne’s café culture with a stop for coffee or tea, a chocolate tasting and an optional lunch at a local eatery. Tour numbers are limited to eight people to ensure a personalized experience.
...  More
From
US$ 70.09
From
US$ 70.09
Learn More

557
Join our tour guides for a walk through Australia’s culture capital and learn what makes this city great and so much more. When you arrive, you'll explore Melbourne with a local who can share the history of the city as well as point out things to do after your walking tour is done. Walks 101 tour guides want to show you the real Melbourne – the city we know and love. Your tour will stop for a coffee and conclude near the Old Melbourne Gaol, where you learn about Australia’s most infamous bush ranger. After your tour is finished, your guide will brings the group to a classic Australian pub where you can experience traditional Aussie food.
...  More
From
US$ 48.85
From
US$ 48.85
Learn More

78
Melbourne is Australia’s culinary capital, but to discover the city’s foodie hotspots, you need a local guide. On this food walking tour, explore Melbourne’s atmospheric laneways and arcades; visit the city’s coolest bars, cafés, and street food stalls; and sample everything from Chinese dumplings to sweet pastries. This small-group tour is limited to 10 people for an authentic local experience.
...  More
From
US$ 82.31
From
US$ 82.31
Learn More

6
Get a taste of vibrant, cosmopolitan Melbourne on this 4-hour tour of the city’s historic landmarks and local districts. Browse the stalls at the legendary Queen Victoria Market, stroll around the idyllic Fitzroy Gardens and marvel over the grand Gothic façade of St Patrick’s Cathedral. Next, follow your local guide on a walking tour of the city’s charming laneways and arcades, taking in the lively Federation Square; the art hubs of Degraves Street and Centre Place; and the Victorian shopping halls of Block Arcade and Royal Arcade.
...  More
From
US$ 41.06
From
US$ 41.06
Learn More

17
Short on time? Explore Melbourne’s best bits, get up close to adorable koalas and visit Phillip Island all in one day! Visit Melbourne landmarks like Captain Cook's Cottage, St Patrick's Cathedral and Fitzroy Gardens; stop to browse the stalls at Queen Victoria Market; and enjoy a walking tour of the city’s neighborhoods. After lunch in the city (own expense), journey to Phillip Island to explore the Churchill Island Heritage Farm, get up close to koalas at the Koala Conservation Centre and watch the evening Penguin Parade at Summerland Beach.
...  More
From
US$ 148.67
From
US$ 148.67
Learn More

7
Short on time? Take in Melbourne’s best bits on this 4-hour tour, including hotel pick-up. Browse the stalls at the Queen Victoria Market, visit Captain Cook's Cottage (own expense) in Fitzroy Gardens, drive past Melbourne Cricket Ground and see Little Italy and Chinatown. After a comprehensive coach tour, set out on a guided walking tour of the city’s Victorian shopping arcades, colorful laneways and street art hot spots. Cap it all off with entrance to the Eureka Skydeck, where you’ll enjoy a spectacular panoramic view of Melbourne.
...  More
From
US$ 58.76
From
US$ 58.76
Learn More

496
Get the inside scoop on Melbourne’s history and highlights on this entertaining walking tour. Learn about Melbourne’s early settlers and how the city transitioned from a 19th-century port town to Victoria’s modern capital. Your local guide leads you through central Melbourne’s iconic laneways and arcades and fills you in on landmarks like Flinders Street Station, Federation Square, and Hosier Lane.
...  More
From
US$ 35.40
From
US$ 35.40
Learn More

384
See more of the Melbourne sites that interest you on this half-day, guided bike tour. From hidden laneways to historic landmarks, get an insider’s perspective on the best of Melbourne while enjoying the speed and flexibility of touring on two wheels. Start your tour in central Melbourne or the cruise port to suit your interests. Bikes, gear and lunch are included on this small-group tour.
...  More
From
US$ 84.96
From
US$ 84.96
Learn More

7
Discover cool, cosmopolitan Melbourne on this full-day coach tour of the city’s most vibrant neighborhoods, including hotel pick-up. Enjoy a comprehensive tour of Melbourne’s highlights, stopping to peek into St Patricks Cathedral, browse the stalls at Queen Victoria Market and stroll around Fitzroy Gardens. Then, follow your local guide around the city’s laneways and arcades; visit the famous Acland Street in St Kilda and stop to snap photos of colorful Brighton Beach, lively Chinatown and the Docklands.
...  More
From
US$ 75.75
From
US$ 75.75
Learn More

16
Looking for an exclusive experience for your family, office, or club? Rent a professional guide for 3 hours to start and finish at the place & time of your choosing. At the start of the tour, your guide will work with you to set the itinerary. Want us to focus on street art? Laneways? Sport? Want to try dumplings in Chinatown? Coffee at an iconic cafe? Cocktails on a rooftop? No worries! Just let us know when you book and we’d be happy to accommodate. Not sure what to do? We'll take you on Melbourne's highlights, spending 3 hours covering the best our city has to offer - street art, historic arcades, iconic laneways, Chinatown, and Melbourne's oldest jail. When you make your booking please include any special requests, as well as where you would like the tour to start from (pickup available from any city location — we'll use public transport to navigate through the city).
...  More
From
US$ 353.27
per group
From
US$ 353.27
per group
Learn More

4
Embark on a self-guided Quest through Melbourne's best lanes and arcades to discover unique street art, stunning architecture, and historical trivia. During your walk, collect clues hidden in the city's art, architecture and history. Then use the clues to solve the puzzle and reveal the surprise destination! You can choose to be led to a local restaurant to enjoy a dining experience, or a secret laneway with amazing street art you may not otherwise have seen. Get ready to be impressed! Starting point: Flinders Street Station Walking distance: 2-3 kilometers Estimated duration: 1-2 hours Accessibility: Suitable for wheelchairs and prams Puzzle Difficulty: Moderate. Suitable for children 10+. This is a self-guided puzzle walk, so you can go at your own pace. Enjoy the Quest as an amazing race by forming teams to see who can reach the surprise destination first! Or, take your time and meander slowly through the clues, stopping wherever you like for detours.
...  More
From
US$ 18.41
per group
From
US$ 18.41
per group
Learn More

Discover Melbourne’s shopping culture on a 3-hour tour through the city center. Visit art galleries featuring Aboriginal art, head underground to Lightning Ridge Opal Mines and discover beautiful jewelry, and visit a number of local artisan shops to sample chocolates, jams, sauces and other specialty foods. Purchase some of these high quality goods or just window shop your way through the city.
...  More
From
US$ 53.10
From
US$ 53.10
Learn More

The only guided walking tour of the city of Melbourne 100% in Spanish! In addition, the tour is fully open to improvisation and personal preferences of the group. Small groups of a maximum of 10 people so you can ask and ask any questions without any problem. Learn the secrets that this city hides at the hands of a person who has lived in it for more than 4 years.
...  More
From
US$ 37.76
From
US$ 37.76
Learn More

Live like a Local: Explore some favourite spots on a playful audio walking tour

Get an insider view of Melbourne without the expense of a live guide when you download this audio tour. You don’t need internet access to run it: audio, maps, and geodata work offline. And you can stop and start whenever you want, or even come back. By the time you’re done, you’ll have places to go, dishes to snaffle, and drinks to sip—enough for a fortnight’s vacation.
...  More
From
US$ 5.40
From
US$ 5.40
Learn More