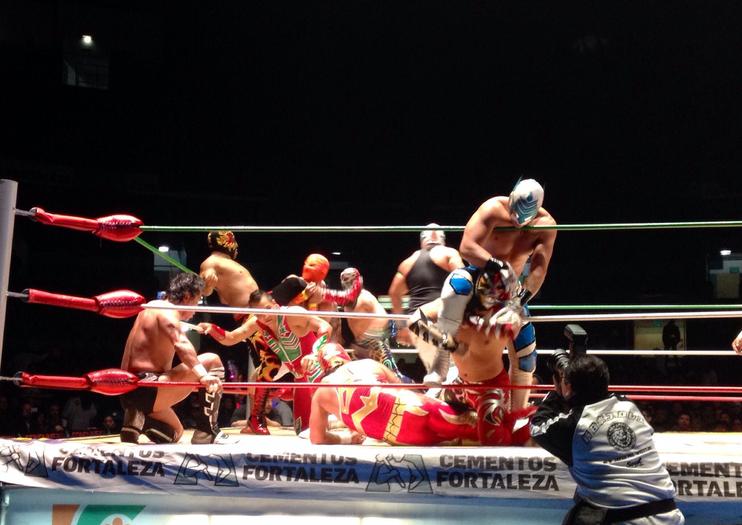 Came to Mexico City in search of some adventure? Look no further than Arena Mexico. This hard-hitting lucha libre (Mexican Wrestler) playground is known to wage epic battles of good versus evil in full luchador splendor.
Built in 1968 to hold 16,500 spectators, this was once the largest stadium ever built for professional wrestling – proving what a following the sport has in Mexico City, which is a little different from its American counterpart. In Mexico, the lucha libre match is a fight not just of contestants, but of good vs. evil, and the crowd (of all ages) gets behind the event to cheer for their favorite wrestler in whatever his particular plight might be. Beer is served, the rules are announced (though loosely adhered to), and then all bets are off, so to speak. Truly an event unique to Mexico, if you’re the type of traveler who wants to do how the Romans do, you must attend an event at Arena Mexico and see the tight-masked wrestlers do their thing.

88
Take a break from conventional sightseeing and experience one of Mexico City’s favorite sporting events — wrestling matches known as lucha libre. Shoot back a shot of tequila and watch masked wrestlers dressed as superheroes and villains rumble and tumble inside the ring. Get into the spirit and cheer on for your preferred luchado! Take home a Mexican wrestling mask to remember this unique evening. Hotel transport included.
...  More
From
US$ 43.00
From
US$ 43.00
Learn More

Feel the unique vibe from the crowd at a Lucha Libre wrestling match in Mexico City, interacting with wrestlers who will talk to you about their experiences and anecdotes during the tour. Be part of the thrills of Lucha Libre, a wrestling phenomenon.
...  More
From
US$ 55.00
From
US$ 55.00
Learn More

OVERVIEWJoin this private tour to see Lucha Libre – a spectacular Mexican freestyle wrestling, savour delicious tacos & drink some refreshing pulque!HIGHLIGHTSEnjoy an unforgettable evening out in Mexico City.Wear your wrestler mask and support your new favorite wrestler at a Lucha Libre match.Try "pulque" and hear about the history & production of this ancient fermented drink.Listen to live music in a traditional Mexican pulqueria.Try some of the best tacos in Mexico City.WHY GO WITH USAn ideal choice for small groups: the price of the tour is fixed and varies just slightly depending on the size of the group.The tour is customizable: we can adjust the program to your interests while the duration of the tour can be always extended for an extra fee.--------------------------NOTE: * the price of the tour/person depends on the number of participants in the booking.
...  More
From
US$ 119.00
From
US$ 119.00
Learn More
Reserve Now & Pay Later
We'll reserve your spot today, and you can cancel up to two days before your experience without making a payment. Secure your spot with ease, stay flexible, and never miss out.
How it works
Find your experience
Choose the experience you want knowing you can secure your spot without being locked in.
Make a reservation
Reserve now and pay later to secure your spot, commitment-free.
Choose when to pay
Come back to pay once your plans are set, or let auto-pay kick in two days before your experience.
Enjoy your experience
Now you're all set! Have a great time.
Frequently Asked Questions  | Terms & Conditions
Reserve Now & Pay Later
Secure your must-do activities without being locked in
Learn More

2
Come and have fun, get excited and feel passion with the best wrestling in the world. Mexican wrestling has distinguished from others for its authenticity, attracting young and old.
...  More
From
US$ 44.00
From
US$ 44.00
Learn More

100
Immerse yourself in one of Mexico’s most exciting cultural traditions during a half-day ‘Lucha libre’ (Mexican wrestling) experience in Mexico City. Sample a Mexican cocktail at a traditional tavern before watching a live Mexican wrestling match at either Arena Mexico or La Arena Coliseo (depending on the day you have booked), two of the country’s most famous Lucha libre stadiums. Small-group tour limited to 15 people.
...  More
From
US$ 35.00
From
US$ 35.00
Learn More

7
You will have a tasty and fun night that you can only experience in Mexico City with local friends. We will start by tasting mouthwatering tacos in one of our favorites taquerias, then we will go to a cantina—a Mexican version of a pub—to taste mezcal, beer or pulque—milky liquor made from the sap of the maguey plant. While we wash down the tacos, we will introduce you to the history and nuances of lucha libre—professional Mexican wrestling. We'll then head to the arena for a fantastic night of lucha libre!
...  More
From
US$ 60.00
From
US$ 60.00
Learn More

Mexican wrestling with an artist (Wrestling)

1
I love Lucha Libre show since I was a little girl and I have been doing this experience for a long time, so today I already know which details makes you really enjoy the matches, even you don't know anything about them. I will teach you what to do and how we Mexicans interact with the wrestlers during the show. What makes this experience unique is the personal and friendly attention, but also sharing the passion for wrestling from a Visual Artist who admire the characterization and masks. I also have to say that I really love to meet people from the whole world and share Mexican Popular culture such as the Lucha Libre. That allows me to know more, understand different ways of thinking and making culture, which I think is real human richness.
...  More
From
US$ 49.00
From
US$ 49.00
Learn More

¡Every Friday is meant to celebrate Mexican pride! In case you didn’t know, Lucha Libre and Mezcal are part of Mexican culture, that's why we´ve created an experience especially for you: Mezcaluchas, a combination of drinks and a wrestling tour at Arena Mexico. “Lucha libre” implies an attitude and a style of roleplaying. Be part of this unique pop-culture phenomenon. You’ll have the chance to see a bunch of muscle wrestlers showing an exaggerated, raucous, and dramatic sport show in Mexico.
...  More
From
US$ 64.00
US$ 80.00
US$ 16.00 savings
From
US$ 64.00
US$ 80.00
US$ 16.00 savings
Learn More

Immerse into the real Mexico & Oaxaca

Mexico City is cool, vibrant, and eclectic. Oaxaca is beautiful, colourful, and laid-back. We LOVE both! Join us on this trip and allow us to show you why! Be prepared to fully immerse. See, listen, taste and smell while we walk through Mexico’s streets and markets, connect with its people, and try lots of mouth-watering food (and drinks)!- Feast on Mexican food, all types of it! - Discover the aztec foundations of Mexico City- Cycle through Mexico City’s streets and navigate through its water canals- Scream your lungs out at Lucha Libre!- Fall in love with the colourful streets of Oaxaca- Swim at the top of petrified waterfalls in Hierve el Agua- Explore the ancient archeological sites of Monte Alban and Mitla- Visit Oaxaca villages and witness how locals work on their crafts- Learn to appreciate what’s behind a glass of Mezcal - Wander through Frida Kahlo’s neighbourhood streets and visit her house- Climb your way to the top of the spectacular Teotihuacan pyramids
...  More
From
US$ 2,198.25
From
US$ 2,198.25
Learn More

Enjoy pre-paid access to some of Mexico City’s top attractions—such as Teotihuacán, the Basilica de Guadalupe, and Six Flags—as well as the opportunity to join popular tours when pre-booking via the Gold Pass website. Ideal for a first-time visitor, the 5-day Gold Pass lets you maximize your time in Mexico City, narrow down your personal itinerary, and explore at your own pace.
...  More
From
US$ 270.00
From
US$ 270.00
Learn More

1
Explore the best of what Mexico City has to offer with the Xolotl Passport Mexico. This is a money-saving attraction pass that offers access to up to 24 of Mexico City's most popular sites. It grants access to tours and attractions. You can go on guided tour of the Teotihuacan Pyramids, enjoy a Lucha Libre evening or try some delicious local delicacies. As a special bonus, you will receive a free Hop On Hop Off 2-FULL Day Pass with Capital Bus. Collect your Xolotl Passport Mexico in your email with a QR Code to have full access to the attractions included. Some attractions need a redemption point exchange to start your adventure in one of the biggest and oldest cities in America. No matter if you are interested in Pre-Columbian history, museums or gastronomy, you will find something to suit your interests with your Xolotl Passport Mexico.
...  More
From
US$ 610.00
From
US$ 610.00
Learn More

Things to do near Mexico City