How to Spend 3 Days in Mexico City 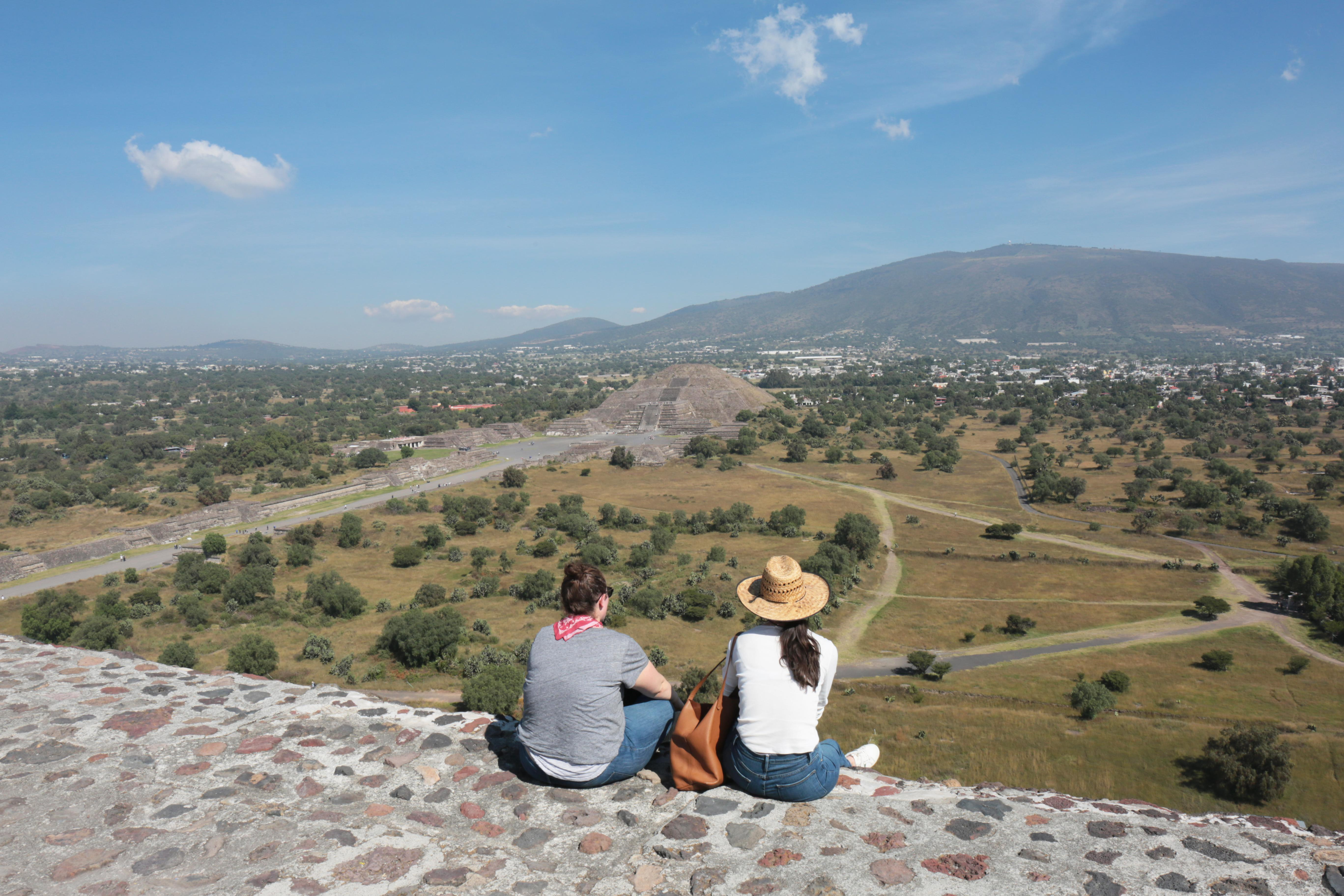 With three days in Mexico City, you have enough time to visit top sights such as Zocalo square and to explore outside the city. Take advantage of guided tours, explore the city’s UNESCO highlights, and go deeper into the culture, sampling Mexican cuisine, shopping at local  markets, and experiencing local sports. Here are some ideas.

Day 1: Sightseeing in the City

Start with a hop-on hop-off bus tour of Mexico City, which offers the convenience of a guided tour but the freedom to disembark as you wish. Hop off at top attractions such as the Zocalo, home to the magnificent Metropolitan Cathedral and the National Palace; the ancient Aztec ruins of Templo Mayor; the Palace of Fine Arts in Alameda Park; and the House of Tiles. Stay on the bus along the grand Paseo de la Reforma Boulevard and jump off to visit the hilltop Chapultepec Castle and the National Museum of Anthropology. Walk down through the forests and lakes of Chapultepec Park into the colorful neighborhood of La Condesa to browse the shops and tuck into typical Mexican cuisine at one of the many restaurants. In the evening, attend a lucha libre (masked wrestling) match. Afterwards, head to Plaza de Garibaldi and enjoy a drink at one of the streetside bars, while mariachi bands play in the square.

Start in the southern suburbs of Mexico City at the floating gardens of Xochimilco—a network of canals and chinampas (man-made islands) that date back to Aztec times. Arrive early to avoid the crowds and set sail around the UNESCO-listed landscapes aboard a traditional trajinera boat. Next, head to the nearby neighborhood of Coyoacán, one of Mexico City’s most picturesque. Use your prebooked skip-the-line tickets to enter the Frida Kahlo Museum, known for its long lines, and check out nearby Diego Rivera Anahuacalli Museum too. Back in the city center, shop at the La Ciudadela artisan market for typical Mexican handicrafts. Head to the San Juan Market a few blocks away for street food, or, for a real Mexican culinary experience, sign up for an evening cooking class.

If you only have time for one day trip from Mexico City, make it the ruins of Teotihuacan. The ancient “City of the Gods” is a top archaeological site in Mexico. To get the most out of your visit, choose to explore with an archaeologist guide and discover the history of the pre-Aztec city. Highlights include climbing the Pyramid of the Sun and the Pyramid of the Moon, walking along the Avenue of the Dead, and visiting the Temple of Quetzalcoatl and the Palace of Quetzalpapalotl. On your final evening in the city, attend a performance of the Mexico City Folkloric Ballet. The shows are held at locations including the Palace of Fine Arts or Chapultepec Castle and feature costumes, live music, and traditional folk dances from all around Mexico—a memorable way to end your vacation.

186
Mexico City’s vibrancy extends across arts and culture, cuisine, and history. This tour combines six of the area’s top sites over a two-day trip, all seen with the expertise of a local guide. Dive into ancient history at Teotihuacan and Tlatelolco, learn explore the Guadalupe Shrine, visit  Xochimilco, learn about art in Coyoacan, and tour the Frida Kahlo museum.
…More
From
US$ 87.00
From
US$ 87.00
Face masks required for travelers in public areas
Face masks required for guides in public areas
Hand sanitizer available to travelers and staff
Learn More
Taking safety measures

176
Known as the City of the Gods, Teotihuacan was one of the largest and most important pre-Aztec cities in Mexico, home to nearly 200,000 people from several ancient cultures. Get to know the UNESCO World Heritage Site during your own private tour from Mexico City with an archeologist guide. Gain special insight into the majestic plazas and murals, and take frame-worthy shots from the top of the Sun and Moon pyramids. Cap off the day with a mezcal and tequila tasting at a local obsidian factory.
…More
From
US$ 108.00
Price varies by group size
From
US$ 108.00
Price varies by group size
Face masks required for travelers in public areas
Face masks required for guides in public areas
Hand sanitizer available to travelers and staff
Learn More
Taking safety measures

198
Peruse 5 of Mexico City's top street markets during this 5-hour cultural and educational tour. Navigate the bustling markets packed with goods like exotic flowers, traditional piñatas, super hot tamales, handcrafted voodoo dolls and 'magic' love potions with your guide, who will give you the inside scoop on the best places to find whatever you're after. With tasty samples along the way, you'll finish your tour with panza llena, corazon contento: a fully tummy and a happy heart.
…More
From
US$ 54.00
From
US$ 54.00
Social distancing enforced throughout experience
Transportation vehicles regularly sanitized
Guides required to regularly wash hands
Learn More
Taking safety measures

92
Take a break from conventional sightseeing and experience one of Mexico City’s favorite sporting events—wrestling matches known as lucha libre. Shoot back a shot of tequila and watch masked wrestlers dressed as superheroes and villains rumble and tumble inside the ring. Get into the spirit and cheer on for your preferred luchado! Take home a Mexican wrestling mask to remember this unique evening. Hotel transport included.
…More
From
US$ 44.00
From
US$ 44.00
Face masks required for travelers in public areas
Face masks required for guides in public areas
Hand sanitizer available to travelers and staff
Learn More
Taking safety measures

164
Enjoy a hands-on cooking lesson on the Mexican culinary arts during this class in Mexico City. The Traditional Mexican Cooking Class, led by your chef-instructor, takes you to a local market for a broad overview of local cuisine before you whip up authentic Mexican dishes. Choose between a morning and evening lesson.
…More
From
US$ 83.20
US$ 104.00
US$ 20.80 savings
From
US$ 83.20
US$ 104.00
US$ 20.80 savings
Face masks required for travelers in public areas
Face masks required for guides in public areas
Hand sanitizer available to travelers and staff
Learn More
Taking safety measures

34
Combine some of Mexico City's most popular landmarks in a single private tour. Over the course of 10 hours with a dedicated guide, you and your private party will ride a trajinera through Xochimilco, explore Coyoacan, visit the National Autonomous University of Mexico, and enjoy admission to the Frida Kahlo Museum. Pickup and drop-off at Mexico City hotels.
…More
From
US$ 140.00
Price varies by group size
From
US$ 140.00
Price varies by group size
Face masks required for travelers in public areas
Face masks required for guides in public areas
Hand sanitizer available to travelers and staff
Learn More
Taking safety measures

48
Reach the top attractions of Mexico City easily and affordably on a hop-on hop-off bus tour. Choose from four themed routes, which cover distinct areas of the city. Disembark at stops that interest you and hop back on when you’re ready. Or simply relax on the upper deck and listen to commentary during the ride. You’re free to experience the city your way at a pace that works for you.
…More
From
US$ 14.00
From
US$ 14.00

16
Experience Mexico City at night in all its rambunctious glory on this 3-hour guided tour. Admire the illuminated monuments of the Zocalo, one of the largest city plazas in the world, before you revel in the festivities of Plaza Garibaldi. Listen to mariachi bands, dance to live music, watch a folkloric show and witness a symbolic cockfight in the square. Enjoy a complimentary drink and the convenience of hotel transport.
…More
From
US$ 48.00
Price varies by group size
From
US$ 48.00
Price varies by group size
Face masks required for travelers in public areas
Face masks required for guides in public areas
Hand sanitizer available to travelers and staff
Learn More
Taking safety measures

2
Discover the roots of Mexico City’s thriving art and cultural scene on a 9 to 10-hour private tour of the National Museum of Anthropology, Frida Kahlo Museum, and Leon Trotsky Museum, all led by a private guide with a history degree. Personalize your educational experience of the museums and the bohemian Coyoacan district, and travel through the city's traffic in comfort with private transportation.
…More
From
US$ 175.00
Price varies by group size
From
US$ 175.00
Price varies by group size
Face masks required for travelers in public areas
Face masks required for guides in public areas
Hand sanitizer available to travelers and staff
Learn More
Taking safety measures