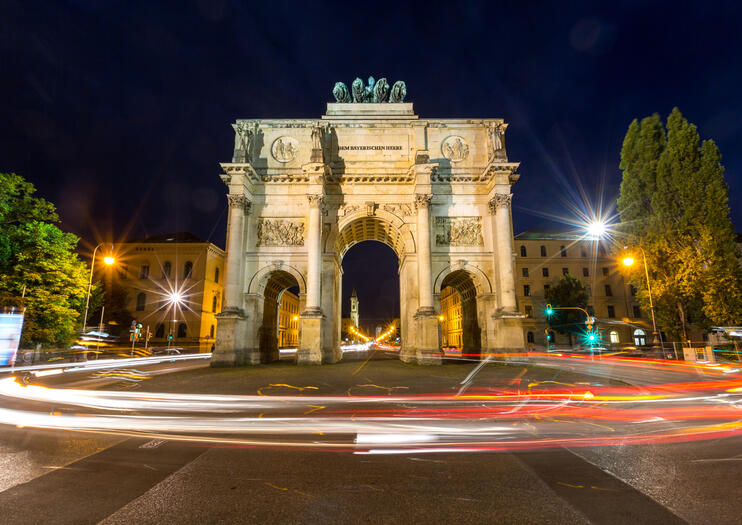 Overview
Stately Munich may have a fairly conservative reputation, but bohemian Schwabing is where the city lets its hair down. North of the city center, Schwabing features some of Munich’s most prominent universities and prettiest green spaces, plus shops, restaurants and buzzing bars aplenty.

The Basics
At the turn of the 20th century, Schwabing was an avant-garde enclave favored by writers, artists, and left-field thinkers. That reputation endures today, and the neighborhood is often seen as a trend-conscious and hip counterpoint to Munich’s traditional heart. Local attractions include the English Garden, site of the popular Chinese Tower beer garden, the stately Siegestor (Victory Gate), and examples of art nouveau architecture. The neighborhood’s youthful spirit is bolstered by several university campuses and major shopping streets like Leopoldstrasse and Hohenzollernstrasse lined with hipster-packed cafes.

Guided tours provide an even more immersive way to see Schwabing. Join a hop-on hop-off bus tour for a quick and easy overview of the area, or explore with a private guide to get up close and personal with the sights.

Things to Know Before You Go
How to Get There
Located north of Munich’s center, expansive Schwabing can easily be reached by taxi or bike. The area is also served by U-Bahn (subway) lines U2, U3, U6, and U8, as well as the 12, 23, 27, 28, and N27 trams and numerous local bus lines.

When to Get There
By day, stroll along Schwabing’s shopping streets and linger over a pilsner in the English Garden. By night, make the most of ample bar and restaurant offerings. The neighborhood is at its most lively during the winter holidays, thanks to its annual Christmas Fair.

Where to Discover Schwabing’s Bohemian Side
Schwabing was once home to creatives like Paul Klee, Wassily Kandinsky, and Rainer Maria Rilke, and traces of its artistic past can still be seen today. The Lenbachhaus Art Gallery displays works by the avant-garde Blue Rider (Der Blau Reiter) Group. Head to the Suresnes Palace on Werneckstrasse to see where Paul Klee kept his atelier, and drop by historical cabarets like the Münchner Lach- und Schießgesellschaft.
Address: Munich, Bavaria 80801, Germany
Read MoreShow Less

3 Tours and Activities to Experience Schwabing

131
See Munich’s night lights come to life, plus enjoy dinner at the famous watering hole Hofbräuhaus, on this private sightseeing tour. Munich is the capital of Bavaria and one of Germany’s most popular destinations. Start with a tour of the city’s popular squares, monuments, fountains, and buildings while they are illuminated for the evening. Then enjoy dinner and a show at Hofbräuhaus before traveling to the top of the Olympic Tower for a spectacular panoramic view of the city and a farewell drink.
…More
From
US$ 86.46
From
US$ 86.46
Face masks required for travelers in public areas
Face masks required for guides in public areas
Face masks provided for travelers
Learn More
Taking safety measures

984
Get acquainted with Munich the easy way on a fun, flexible hop-on hop-off city bus tour. Choose a 24-hour Express Tour to check out Munich’s main highlights or a 24-hour or 48-hour Grand Tour ticket to widen your sightseeing net. Either way, settle aboard an open-top double-decker bus, listen to the enlightening onboard commentary, and enjoy panoramic views of sites such as the Marienplatz, Hofbrauhaus, Viktualienmarkt and more. Hop off at the stops that interest you, explore on foot and then re-board the bus at any stop you wish.
…More
From
US$ 23.47
From
US$ 23.47
Face masks required for travelers in public areas
Face masks required for guides in public areas
Face masks provided for travelers
Learn More
Taking safety measures

Cover more sights in less time with your own personal chauffeur. On this private, half-day Munich tour by car, you’ll hit all the highlights of the history-packed Bavarian city, from stunning, Baroque-era Nymphenburg Palace to the Oktoberfest grounds. Door-to-door hotel pickup and drop-off are included, plus time to visit a museum or historical attraction of your choice.
…More
From
US$ 1,049.87
per group
From
US$ 1,049.87
per group
Face masks required for travelers in public areas
Face masks required for guides in public areas
Face masks provided for travelers
Learn More
Taking safety measures