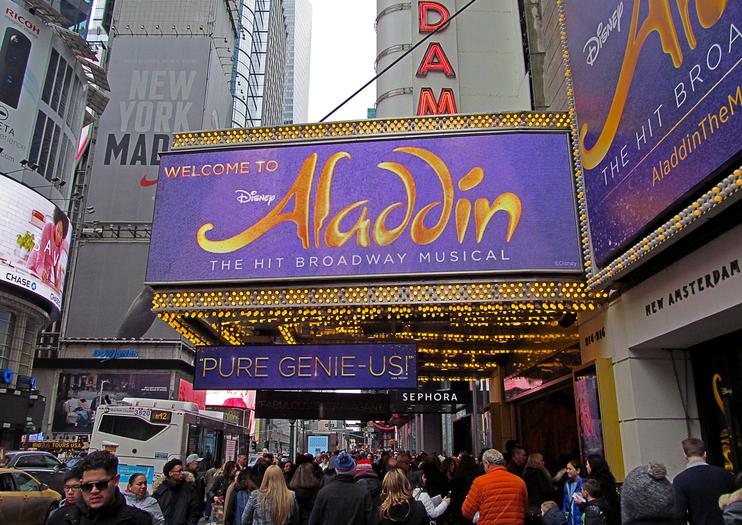 Situated in New York City’s Theater District, the New Amsterdam is Broadway’s oldest operating theater house. Opened in 1903 and called “The House Beautiful,” this ornate venue features all-singing, all-dancing Disney® productions such as Aladdin and The Lion King.
The Basics
The New Amsterdam Theatre combines a tall Beaux Arts–style facade with an intimate art nouveau 1,702-seat auditorium decorated with floral, grapevine, and peacock reliefs. Known in its early years for hosting The Ziegfeld Follies (a theatrical revue with dancing women), the theater started to decline after the Great Depression. Leased in 1993 by the Walt Disney Company and restored over the next couple of years, the New Amsterdam now presents big-name Disney productions.
The best way to experience the New Amsterdam is to catch a show—secure your seats in advance. For a behind-the-scenes look at the New Amsterdam as well as the surrounding Theater District, opt for a Broadway walking tour.
Things to Know Before You Go
How to Get There
Located at 214 West 42nd Street, the New Amsterdam is easy to get to via subway. Take the N, Q, R, or W train to 42nd Street–Times Square station, then walk westward along West 42nd Street toward 8th Avenue. If you’re driving, several paid parking garages are available nearby.
When to Get There
The theater typically stages eight performances a week—check the schedule. Get there at least 15 minutes before showtime. The box office is open Monday through Friday from 9am to 8pm, Saturday from 10am to 8pm, and Sunday from 10am to 6:30pm.
Things to See at the New Amsterdam Theatre
Don’t miss the lobby’s sculptural renditions of Shakespeare’s plays, or the auditorium’s right-hand wall graced with prominent theater figures (including Will Rogers and Florenz Ziegfeld, producer of The Ziegfeld Follies). And keep a lookout for the resident ghost—Ziegfeld chorus girl Olive Thomas. Olive died mysteriously in 1920 and has been spotted gliding across the stage, blowing kisses to the audience.
Address: 214 West 42nd Street, New York City, New York, USA
Admission: Varies
Read MoreShow Less

114
Book tickets to the Tony Award-winning musical hit 'Aladdin,' performed at New Amsterdam Theater in New York City. This Broadway rendition of the 1992 Disney film brings a beloved cast of characters to the stage with stunning choreography. The whole family can enjoy the classic Broadway show experience while taking a break from the crowds and sightseeing.
...  More
From
US$ 87.28
From
US$ 87.28
Learn More

55
Get more from the Theater District visit than if you were to explore independently. This Disney on Broadway behind-the-scenes walking tour takes you along Broadway Avenue and through this popular district to learn about its landmarks and musical history. Then, go inside Disney’s New Amsterdam Theatre with an in-house historian to hear exclusive details about top Disney productions and to gain special access to the theater's props and costumes studio.
...  More
From
US$ 72.00
From
US$ 72.00
Learn More

Family day in New York with a local: private & personalized

With so much to do and see in New York, it can be stressful to figure it all out, especially if traveling with children. Give yourself a break and let a local New Yorker guide design a custom half-day itinerary just for your family. Whether you want to see the Statue of Liberty, picnic in Central Park, or find Manhattan’s best pizza, your personal guide makes it all possible.
...  More
From
US$ 115.56
Price varies by group size
From
US$ 115.56
Price varies by group size
Learn More