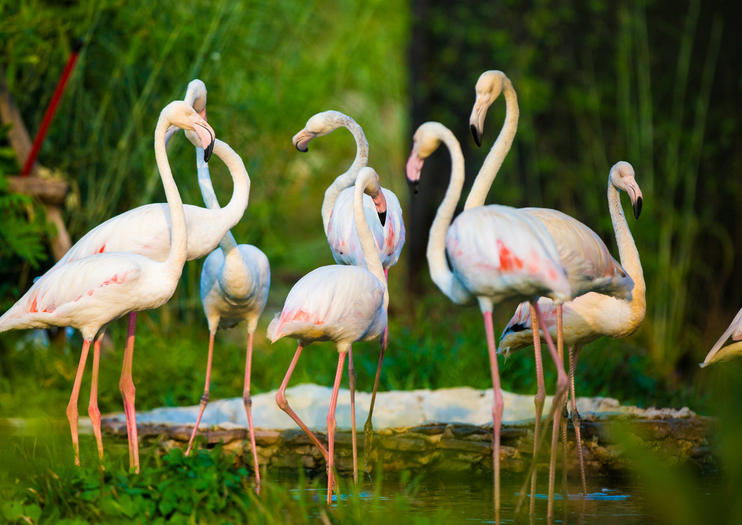 The shriek of the Honolulu Zoo’s population of endangered white-handed gibbons is a familiar morning sound to Waikiki’s regular surfing contingent; the zoo is just across the street from some of the most popular beginner surf breaks toward the far end of Waikiki near Diamond Head crater. In addition to the monkeys, the sprawling 42-acre open-air zoo is home to more than 900 tropical animals including elephants, black rhino, giraffe, Sumatran tiger, aardvark, meerkat, orangutan, birds, reptiles and more. The zoo also houses animals only found in Hawaii, including the state bird, the nēnē, as well as a number of endemic plants in and around the enclosures.

The zoo’s entrance is just off a large parking lot on the corner of Kapahulu Avenue and Waikiki’s main oceanfront drag, Kalakaua Avenue. There is a $1/hour cash-only charge for on-site parking. Several TheBus routes as well as the popular Waikiki hop on/hop off trolley also pass near the zoo.
The Honolulu Zoo is open daily (except Dec. 25) from 9 a.m. til 4:30. p.m. General admission tickets are $14 for adults and $6 for children with discounts for Hawaii residents and military with ID. Allot at least an hour and a half to explore the zoo.
Address: 151 Kapahulu Ave, Honolulu, Hawaii, USA 96815, USA
Hours: Open daily 9am-4:30pm
Admission: Adults: $14; Children: $6
Read MoreShow Less

317
Discover Honolulu, Pearl Harbor and/or Waikiki on a 1-, 4-, or 7-day hop-on hop-off tour and see all the top attractions at your own pace. Step aboard a double-decker bus or open-air trolley to pass the capital city’s best restaurants and shops, historic sites and renowned scenery. Choose from multiple routes, marveling at Diamond Head on the Green Line or the beautiful Hanauma Bay on the Blue Line. Upgrade to include all of the lines on your ticket.
...  More
From
US$ 26.25
From
US$ 26.25
Learn More

12
This tour is a hassle free, USS Arizona ticket included without line and waiting, luxury transportation as part of small group ( no more than 23 passengers ), all admission included and audio head set included in 8 languages and you will get 2 valuable free Pearl Harbor gifts per person. We also pick up almost every single hotel in Waikiki.
...  More
From
US$ 139.00
From
US$ 139.00
Learn More

75
Explore Diamond Head and the Waikiki area on this 2-hour guided Segway tour. Climb on to your own Segway Personal Transporter, a self-balancing, two-wheeled electric scooter that allows you to enjoy some of the Honolulu area's most important sites without all of the walking. Visit Diamond Head Lighthouse, Waikiki Beach, Kapiolani Park and the bustling streets of the Waikiki area. Listen as your guide provides engaging, informative commentary about the culture and history of the area.
...  More
From
US$ 178.01
From
US$ 178.01
Learn More
Reserve Now & Pay Later
We'll reserve your spot today, and you can cancel up to two days before your experience without making a payment. Secure your spot with ease, stay flexible, and never miss out.
How it works
Find your experience
Choose the experience you want knowing you can secure your spot without being locked in.
Make a reservation
Reserve now and pay later to secure your spot, commitment-free.
Choose when to pay
Come back to pay once your plans are set, or let auto-pay kick in two days before your experience.
Enjoy your experience
Now you're all set! Have a great time.
Frequently Asked Questions  | Terms & Conditions
Reserve Now & Pay Later
Secure your must-do activities without being locked in
Learn More

32
Explore Honolulu on a half-day bike tour that provides an insider's look at the vibrant city's history, beaches, and sights. See street art in Kaka'ako park, taste fresh Hawaiian fruits in Chinatown, go up the Aloha Tower for the views, and discover the monuments around the Hawaii State Capitol, including the royal Iolani Palace. Your informative guide provides a bike and helmet, fascinating commentary throughout the leisurely tour.
...  More
From
US$ 99.00
From
US$ 99.00
Learn More

42
Glide through Honolulu’s scenic highlights and historic landmarks on a 1.5-hour Segway tour of Oahu’s most iconic city. Learn to maneuver your gyroscopic ride, then follow your guide through the lush Kapiolani Park, where swaying palms frame unforgettable views of Diamond Head. Explore the stunning shoreline on coastal paths to Makalei Beach Park and Queen’s Surf Beach, snag a selfie with Duke Kahanamoku’s famous statue, then finish your tour in the heart of Waikiki.
...  More
From
US$ 145.55
From
US$ 145.55
Learn More

Hawai'i Walks is a walking tour company that is historically literate, compelling, and sustainable. Our expert guides all possess advanced degrees and are experts in Hawaiian flora, fauna, and history. Most tours just scratch the surface of what it means to be in Hawai'i, while our guides cover geological and human history throughout the Pacific, present local social issues, and in-depth descriptions of the animals and plants that you encounter. We share this information through the lens of sustainability, discussing the various impacts of industry in Waikiki while providing customers with information they need to be better consumers while visiting the islands. If you're looking for an expansive background on the region you are visiting, join us on our nature tour today!
...  More
From
US$ 15.00
US$ 25.00
US$ 10.00 savings
From
US$ 15.00
US$ 25.00
US$ 10.00 savings
Learn More

1
Enjoy a 2-hour guided all-terrain self-balancing hoverboard tour of Waikiki to the oceanfront cliffs past Diamond Head lighthouse. On the perfect platform for sightseeing and adventure, you’ll hover over Waikiki’s sandy pathways, grassy areas, and sidewalks and learn about the scenic highlights from your expert guide. Less in-depth with history and culture and without audio headsets like our signature tours have, this faster tour focuses more on the excitement of riding, fun facts, and beautiful photo opportunities.The small group tour takes a fun path around the less crowded naturally scenic areas of Waikiki to Amelia Earhart lookout with views of East Oahu, neighbor islands, and sometimes whales in the winter months. Hover past the Honolulu Aquarium, neoclassical War memorial, Historic Kapiolani Bandstand, massive banyan trees, charming cottages, outriggers off Kaimana Beach, 100’ tall palm tree groves, nearly secluded beach parks, and enjoy wonderful oceanfront views of Waikiki.
...  More
From
US$ 134.00
From
US$ 134.00
Learn More

Things to do near Oahu