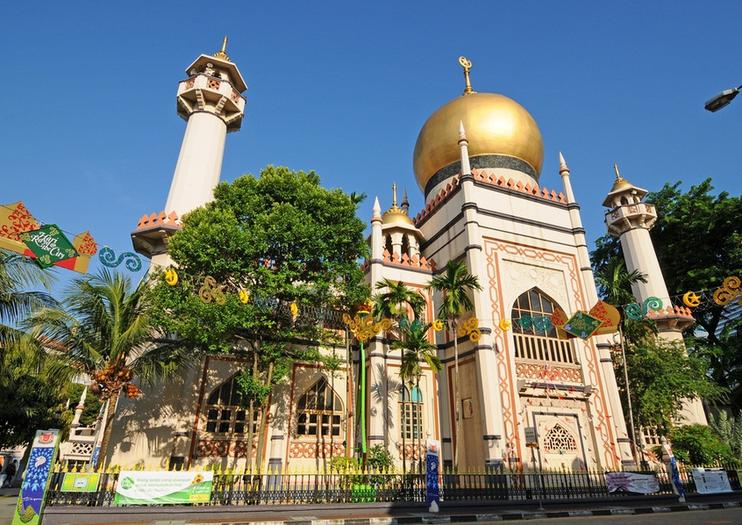 The oldest mosque in Singapore, the Sultan Mosque (Masjid Sultan), is located in the Malay-Muslim quarter of town. The sheen of the two distinguished golden domes that top it, as well as its colorful yet tasteful façade, has made it one of the premiere destinations for visitors of any faith.

Standing on a site totaling 44,228 square feet (4,109 square meters), the massive interior two-stories high can hold about 5,000 faithful Muslims, with separate conference rooms and auditoriums to seat many more. It is also decorated with handcrafted motifs, golden floral patterns and calligraphy to top it all with intricate design.

Having long been a hub for local commerce and art, the mosque is also known to have been the place of several historic events, including where several racial riots took place in the 1950s.

These days, planners organize frequent seminars here for prominent theologians and scholars. There are also occasional art showings, charity events and blood drives as well as opportunities to have an in-depth look into the Quran with novice level classes. Check the Sultan Mosque website ahead of time to see what might be happening when you are in town.

68
Singapore is a very diverse place, and on this food-focused walking tour, you can sample a variety of different cuisines as you explore the Chinatown, Little India, and Kampong Glam neighborhoods. Follow your tour guide through the streets and learn about the history, culture, and heritage of Singapore and discover where the locals like to eat. Get in-depth insights into each dish that you sample and hear stories about the local communities.
...  More
Booked by 174 travelers
From
US$ 141.73
From
US$ 141.73
Learn More

16
With beautiful waterfront scenery, pretty gardens, and cutting-edge galleries, Singapore ranks among Asia’s must-see cities—but beating the crowds and exploring independently by public transport can be challenging. On this tour, spin through Singapore by private air-conditioned minivan and explore in comfort. Hit top attractions like Chinatown, Gardens by the Bay, Little India, or Marina Bay with your guide, and customize your itinerary to hit the highlights of most interest.
...  More
Booked by 66 travelers
From
US$ 246.58
Price varies by group size
From
US$ 246.58
Price varies by group size
Learn More

42
Experience Singapore exactly how you want to on a private sightseeing tour. You choose the duration, ranging from four to eight hours.  Whether you want to explore gardens, enjoy local cuisine, take in the architecture, or all of the above, a 100% customized itinerary will be created for you. Your guide will meet you at your hotel and all public transportation costs along the way are included.
...  More
From
US$ 163.76
Price varies by group size
From
US$ 163.76
Price varies by group size
Learn More
Reserve Now & Pay Later
We'll reserve your spot today, and you can cancel up to two days before your experience without making a payment. Secure your spot with ease, stay flexible, and never miss out.
How it works
Find your experience
Choose the experience you want knowing you can secure your spot without being locked in.
Make a reservation
Reserve now and pay later to secure your spot, commitment-free.
Choose when to pay
Come back to pay once your plans are set, or let auto-pay kick in two days before your experience.
Enjoy your experience
Now you're all set! Have a great time.
Frequently Asked Questions  | Terms & Conditions
Reserve Now & Pay Later
Secure your must-do activities without being locked in
Learn More

Small-Group Food Tour With Hawker Center: Eat Like A Local

123
Dine like a local on this food tour of Singapore, which includes 10 tastings of the city's best traditional and innovative dishes alike. Walk past some of the city's most popular attractions and through its distinctive neighborhoods between bites, all while your guide provides insightful commentary and useful information about the area. This small-group tour is limited to 9 people for a more intimate experience.
...  More
From
US$ 114.44
From
US$ 114.44
Learn More

10
Save precious time in Singapore on this private door-to-door guided day tour complete with vehicle that brings you to the heart of the Lion City. Cruise the Singapore River on a traditional bumboat and explore Kampong Glam, Little India, and Chinatown, with an optional stop at Gardens by the Bay. Enjoy lunch at a 19th-century convent and dinner at a hawker market.
...  More
Booked by 71 travelers
From
US$ 360.00
Price varies by group size
From
US$ 360.00
Price varies by group size
Learn More

41
Discover Singapore’s Kampong Glam district on a walking tour with an informative guide, who provides a more in-depth experience of this neighborhood than you might otherwise have on your own. Learn about traditional Indonesian medicine and Malay folk customs, and check out Sultan Mosque, one of Singapore’s most prominent places of worship for the Muslim community.
...  More
Booked by 183 travelers
From
US$ 27.86
From
US$ 27.86
Learn More

43
Explore Singapore’s unique food culture in depth on this private tour. A personal guide will show just you and your group around Singapore’s culinary highlights, including places in Kampong Glam, Little India, Katong, and Old Airport Road. Tour at your own pace, ask your guide questions, and eat like a local for a day. Sample all kinds of food, and learn about Singaporean history and culture.
...  More
From
US$ 441.96
per group
From
US$ 441.96
per group
Learn More

Uncover the Gems of Kampong Glam: The Seat of Malay Royalty in Singapore

8
So many Singapore walking tours cover the same old, same old districts. Not this one. Traveling in a small group of maximum six guests, follow your local guide through the streets of Kampong Glam. See sights from its past as the home of Malay royalty, like the Istana Kampong Glam and the Sultan Mosque, and discover its hipster present on trendy Haji Lane.
...  More
Booked by 14 travelers
From
US$ 49.85
From
US$ 49.85
Learn More

2
In this walk, we explore the Malay quarters - Kampong (Village) Glam, which has evolved from the area where royalty lived to a hip, super trendy and culturally vibrant district today. The experience includes three parts : Eat: Learn the story of the enclave through its food where we will taste & drink some hidden and authentic gems of Malay street food. We will visit local family-run establishments, one of which have been in business for more than 100 years. See: The murals in this area defined and set the scene for street art in Singapore. Together, we explore the side streets and back alleys to understand the history and traditions of one of the indigenous culture of the island. Drink: In the last 1/2hour, we end off this experience by stopping at a local craft beer house where you have the option to taste local brews (non-alcoholic options available too). You will get insights into the local brewing scene and walk you through the ingredients, process and styles of the region.
...  More
From
US$ 51.84
From
US$ 51.84
Learn More

Goblin Photography is a Singapore-based photography company, run by photographers for photographers. We live and breathe the art of photography and want to share our passion of creativity and image-making. We believe that the camera should be an extension of yourself and a tool for creativity, so that no matter what camera you’re using, you always know how to see the world the way a photographer should. Focusing on composition, our lessons are perfect for beginner to intermediate photographers who crave an interactive outdoor learning environment. Our classrooms are the streets of Singapore, enabling you to jump right in and practise the skills taught to you on the go.
...  More
From
US$ 76.00
US$ 95.00
US$ 19.00 savings
From
US$ 76.00
US$ 95.00
US$ 19.00 savings
Learn More

This 4 hours tour by experienced, passionate and licensed guide will provide a comprehensive understanding to Singapore, history, culture, architecture, arts, religions, food, natural view, shopping malls, sports, iconic buildings. You will be definitely amazed by the tour.
...  More
From
US$ 64.00
US$ 80.00
US$ 16.00 savings
From
US$ 64.00
US$ 80.00
US$ 16.00 savings
Learn More

Want to explore the local side of Singapore’s Kampong Glam neighborhood? Join a local and explore this colorful and cultural district. From a historic cemetery to charming city streets full of character, your friendly host knows all the unmissable spots. Start your experience with an architectural gem. The Masjid Hajjah Fatimah mosque is a beautiful blend of local and European building styles. Your local host will explain why this structure was once known as “The Leaning Tower of Singapore”. Weave your way through some of Singapore’s oldest and narrowest city streets where you will find plenty of knickknacks, back-street barbers and even live chickens! Take in the sights and smells of Bassorah Street, a vibrant lane filled with perfume stores. Then discover the beautiful arches and mosaic art of another of Kampong Glams’s buzzing roads. Fall in love with street art on a street covered in colorful murals, before visiting a square that looks like it comes straight out of a movie.
...  More
From
US$ 60.81
Price varies by group size
From
US$ 60.81
Price varies by group size
Learn More