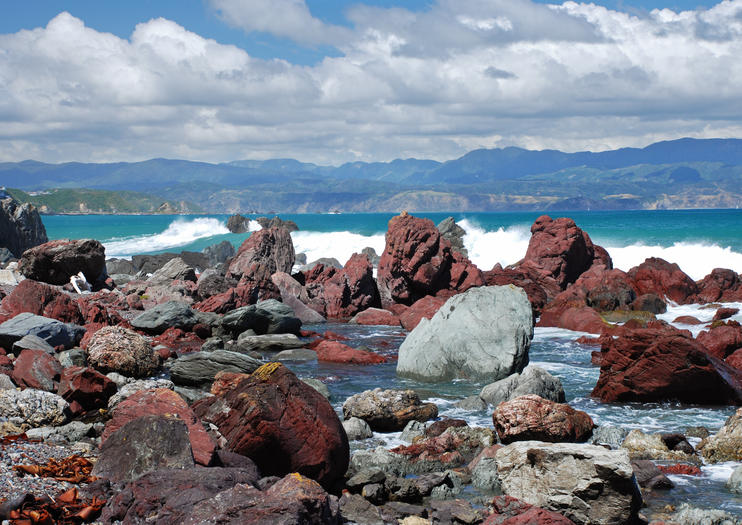 Fur seals aren’t usually the first thing that comes to mind when you think of New Zealand’s capital, but here at coastal Red Rocks Reserve (Pariwhero) just minutes outside of the city, colonies of large, bachelor seals can be found from May-October. Having lost the battle to become breeding males at the fur seal colonies on the South Island, these males swim up across the Cook Strait to winter on Wellington’s coast.
Even in summer when seals aren’t around, the rugged trail leading out to the reserve offers sweeping views of the shoreline, where on the clearest of days you can see snowcapped peaks that rise from the neighboring South Island. The reserve gets its name from the reddish-hued rocks that dot the slippery coast, which are layers of ancient pillow lava formed over 200 million years ago. It’s the small deposits of iron ore that give the rocks their coloring, but ancient Maori believe the navigator, Kupe, spilled blood on the rocks when a paua, or abalone, suddenly clamped on his hand. The trail is also accessible to cyclists, joggers, and off-road drivers, and is the perfect way to connect with nature before spending a night on the town.
Insider's Tip: The best days to visit the reserve are those with very little wind.

You can visit Red Rocks Reserve independently or as part of a fur seal colony tour that departs from central Wellington. The coastal trail has minimal shade, so be sure to bring water and sunscreen, and takes about 2-3 hours round trip depending on how far you hike.
Address: Red Rocks Reserve, Wellington, New Zealand
Hours: Daylight hours
Read MoreShow Less

31
Tick off the top attractions of the Windy City on this private full-day tour of Wellington. Experience the myriad delights of New Zealand’s capital as you take in the views from Mt Victoria, spot seals at Red Rocks, then go behind-the-scenes with a 45-minute tour of the Weta Cave, where the special effects for Lord of the Rings and The Hobbit were created. After a scrumptious lunch at the Chocolate Fish Café (included), ride the cable car over Wellington and visit landmarks like the Botanical Gardens, the Parliament Buildings and the Beehive.
...  More
From
US$ 170.43
US$ 189.37
US$ 18.94 savings
From
US$ 170.43
US$ 189.37
US$ 18.94 savings
Learn More

70
Make easy work of Wellington’s hills and devise your own itinerary on this self-guided electric bike tour. Opt for a 1 or 2-day bike rental and zip between sights like the Weta Workshop, Te Papa Museum, or Zealandia Sanctuary; glide along the Wellington Waterfront; or escape the city to cycle the Rimutaka Rail Trail or take in the views from Mt Victoria.
...  More
From
US$ 51.65
From
US$ 51.65
Learn More

Things to do near Wellington