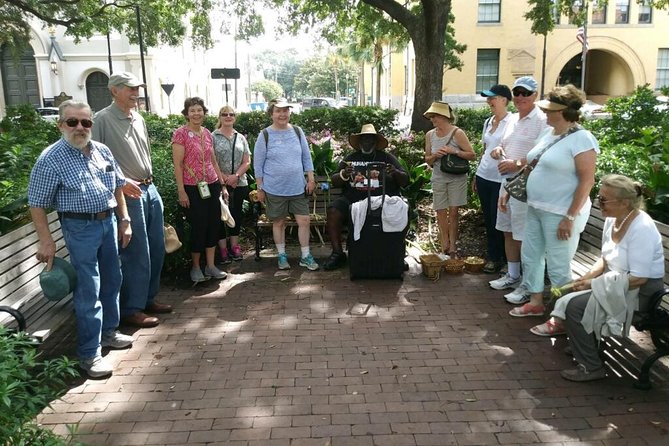 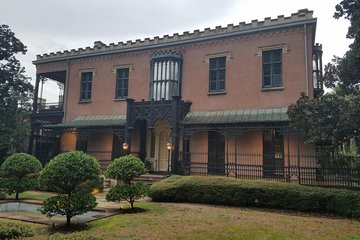 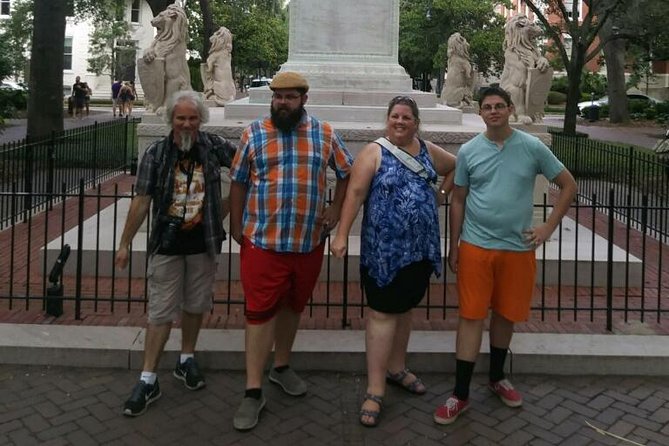 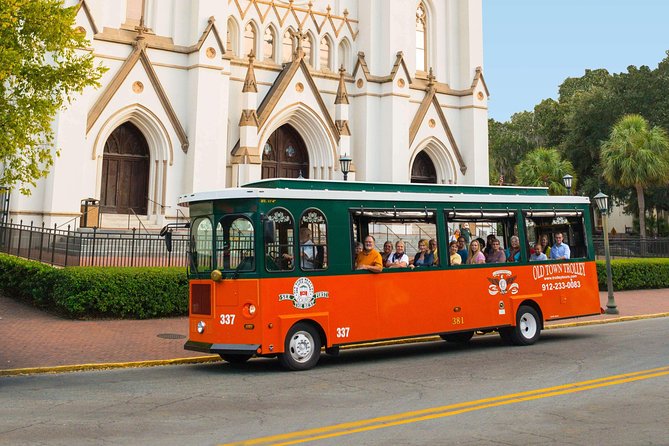 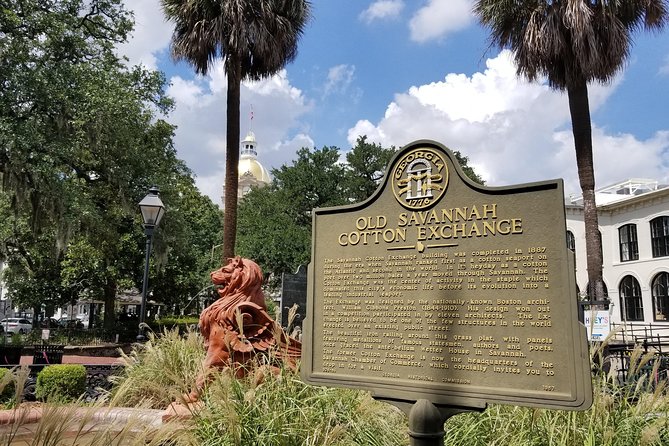 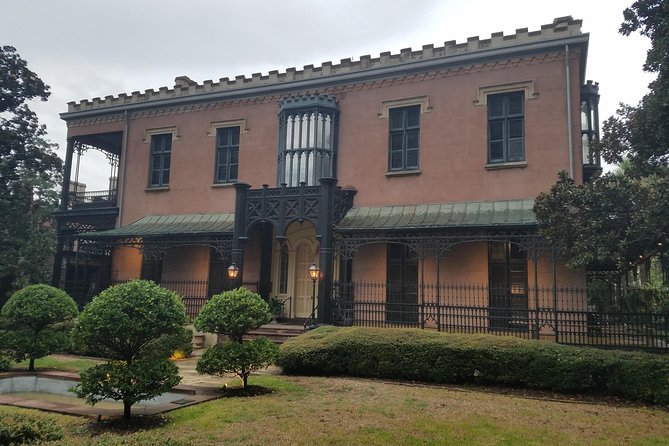 Explore historical Savannah in two different ways with this combo experience that includes the hop-on hop-off trolley and a walking tour. With your ticket for the hop-on hop-off trolley, you can visit city attractions at your own pace, hopping off at the stops that interest you. On the walking tour, you'll gain insight into the architecture and heritage of the Savannah Historic District from a guide who entertains you with local stories.

10:00am Daily
The Historic walking tour is 2-hours in length. Walking tour must be redeemed on the date selected at checkout.
Trolley tours operate daily and depart every 15-30 minutes. Trolley tour tickets can be used on any date, but once redeemed with the trolley driver, they are valid for the remainder of that day.
Read MoreShow Less

This combo tour is your ticket to the ultimate Savannah experience. With hop-on and off trolley privileges, the fully narrated trolley tour allows you to explore the stunning sites of historic Savannah for a full day.
After hopping on and off your trolley throughout the city, take advantage of your included walking tour of Savannah's history. This tour mixes the history of Georgia's first city with it's amazing architecture. You'll be taken on a journey through Savannah's historic district with architecturally significant buildings, including examples of Federal, Victorian Regency, Greek and Gothic Revival and Italianate architecture. From simple Colonial style to Medieval-influenced cathedrals to the gingerbread accents of the Victorian period, examples of most of America’s 18th and 19th century prevailing architectural styles can be found in Savannah.
You will also discover how the vibrancy of General James Oglethorpe’s enlightened Utopian plan worked in the 18th century and how it thrives today with some exciting highlights:
• Christ Church,1840, James Couper, amateur architect
• Pink House, (Habersham residence) 1771
• Kehoe House,1892 by DeWhitt Bruyn
• Owens Thomas House, 1816, by William Jay
• Davenport House, 1820 - Isaiah DavenportThe magnificent ironwork is a well known feature of the architecture in Savannah. Beautiful scrolled designs appear on many of the buildings in cast-iron balconies, stair railings and window guards. Ironwork can be found in many of the squares, and surrounding monuments and fountains.
There's no single best way to see the sights of historic Savannah, but this combo is an excellent way to make the most of your time!
Read MoreShow Less

5.0
27 Reviews
5 stars
4 stars
3 stars
2 stars
1 star
Reviews by Viator travelers
What a great walking adventure. Ed was...
Jaime D
, Apr 2018
What a great walking adventure. Ed was just the right person for the tour - he was very knowledgeable and his architecture background allowed him to point out wonderful tidbits about the architecture and monuments of the old city.
... MoreLess
A lot to take in in a few hours...
TED L
, Jan 2018
A lot to take in in a few hours. Savannah has an incredible history and the tour guides are very informative
... MoreLess
The combo package was totally worth...
Dina O
, Sep 2017
The combo package was totally worth it - we set out in he morning for a two-hour amble around the different plazas downtown with an architect who was passionate about the history of Savannah and the stories behind its buildings and landmarks. It was late August so very hot and humid, so the tour was an amble and stretched out to almost three hours. After lunch, we took the trolley and had a truly entertaining guide who told us even more stories some slightly exaggerated but oh-so funny and made the tour worthwhile. We just stayed on for the whole ride, then stopped off at a couple of the sights the following day. Savannah is beautiful, and these tours are a great way to see this historic, colourful city.
... MoreLess
Excellent time..what better than...
Carole P
, Aug 2017
Excellent time..what better than bringing a city alive by a former city architect/engineer. Knows where every thing/one hides! Only wish it had been an entire day!
... MoreLess
Competent and entertaining guide on...
William B
, Jul 2017
Competent and entertaining guide on our stroll through the parks and city. If you have an interest in history and architecture, this is for you !
... MoreLess
Good way to see the city. Our tour...
Patricia P
, Jul 2017
Good way to see the city. Our tour guides were very knowledgeable and friendly. The trolley is very convenient for seeing the city in an overview and the hop on/hop off option is great for exploring a bit more.
... MoreLess
We had never been to Savannah before...
Carla R
, May 2017
We had never been to Savannah before and this tour was very informative. We learned so much about the history of Savannah and the surrounding area, all the while getting to see the beauty of the city and it's historic buildings. We would highly recommend this tour.
... MoreLess
We had a great tour. Ed was so...
KAREN S
, Apr 2017
We had a great tour. Ed was so knowledgeable about the city. My husband is in real estate and Ed's know-how about how the city developed and is still developing was fantastic. He's the best!
... MoreLess
The best of both worlds. First a...
Bill A
, Mar 2017
The best of both worlds. First a guided walking tour with an architect explaining the history of the town, the beautiful squares why and how they were built the way they were and discussing many of the very historic buildings in downtown Savannah. Second a leisurely hop-on-hop-off, fully narrated tour on our own where we could spend the time we chose at the stops we chose.
... MoreLess
We began our walking tour in the...
BrassSaint
, Jan 2017
We began our walking tour in the historic area. We were the only ones on that tour that day. We had our own personal guide who was very knowledgeable about the history and architecture of the area. He ended our tour near the restaurant we had reservations for lunch, Paula Deen's. After lunch we began our trolley portion of the tour. We got off at one stop near a large park to walk around the area. The homes were magnificent and some were decorated for the season. After walking a while we boarded another trolley and continued the tour. By the time we were dropped off at our car we felt we had seen the historic area of Savannah. Highly recommended.
... MoreLess
Reserve Now & Pay Later
We'll reserve your spot today, and you can cancel up to two days before your experience without making a payment. Secure your spot with ease, stay flexible, and never miss out.
How it works
Find your experience
Choose the experience you want knowing you can secure your spot without being locked in.
Make a reservation
Reserve now and pay later to secure your spot, commitment-free.
Choose when to pay
Come back to pay once your plans are set, or let auto-pay kick in two days before your experience.
Enjoy your experience
Now you're all set! Have a great time.
Frequently Asked Questions  | Terms & Conditions
Reserve Now & Pay Later
Secure your must-do activities without being locked in
Learn More