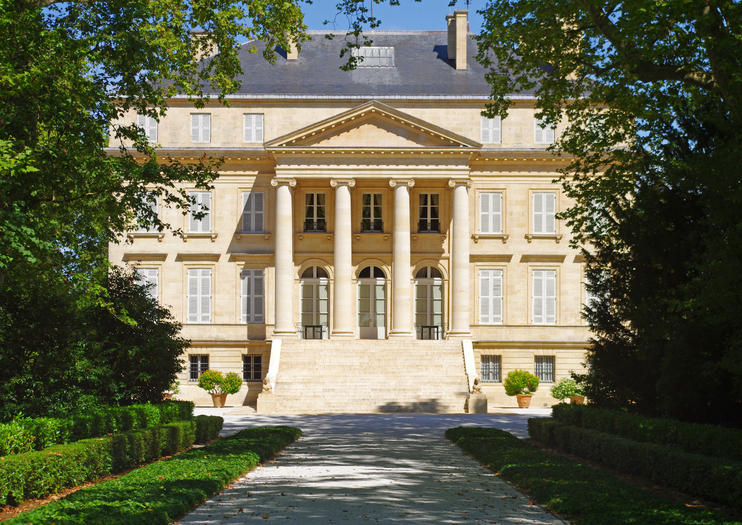 Found in the sandy flatlands of the Médoc region in southwest France, Château Margaux is today known for producing some of the finest – and most expensive – Premier Grand Cru Classé Bordeaux wines in the world. Unusually for Bordeaux, the Margaux estate produces whites as well as rich, spicy world-renowned reds, and sells around 30,000 cases per year. All Margaux wines are produced organically and the average age of the vines is 36 years old, forming from a mixture of Cabernet Sauvignon, Merlot, Sauvignon Blanc, Petit Verdot and Cabernet Franc grapes.
Although wines have been produced on the estate since the 1580s, it was confiscated from its aristocratic owners in the French Revolution of 1789–99 and its fortunes were only revived with the advent of the Marquis de la Colonilla in 1810. He built the elegant Palladian mansion, to a design by Louis Combes, which still stands at the heart of the estate; since 1977 it has been the home of the Mentzelopoulos family, who are credited with restoring the reputation of Margaux wines and consistently improving their quality. In 2010 an upgrade of the cellars was undertaken by British mega-architect Lord Norman Foster; a new cooperage, visitor center and tasting rooms were added at the same time.

2
Revel in the world famous Médoc wine region where we visit one Chateau. The Medoc Tour offers the chance to see some of the most prestigious Chateaux of the Bordeaux wine region. We wind North through the Médoc Wine Route des Chateaux, visiting our long-time wine making friends along the way and tasting the best wines that the Médoc region has to offer. Taste delicious wine and learn all about the famous region of France where Cabernet Sauvignon originated.
...  More
From
US$91.80
From
US$91.80
Learn More

An afternoon in Margaux.

1
Venture to Bordeaux’s storied Left Bank—and visit some of the world’s most renowned wineries—on this small-group, half-day tour. After convening in central Bordeaux, you’ll travel via minivan to three different chateaux, including the superlative Château Margaux. Enjoy tours and tastings as you go, and learn more about what makes the Margaux appellation so revered among wine lovers. As you explore, you’ll also take in the region’s exceptional scenery.
...  More
From
US$96.30
From
US$96.30
Learn More

2
Discover the secrets and legends surrounding the world-famous Haut-Médoc region on this wine-lover’s tasting tour from Bordeaux. With lunch and round-trip transport from central Bordeaux included, spin through the Médoc countryside with your guide. Visit traditional wineries including Margaux, Paloumey, and Siran, and learn of traditional Médoc winemaking techniques during in-depth cellar tours. Along the way, sample eight different Haut-Médoc wines during expert-led tasting sessions.
...  More
From
US$168.81
From
US$168.81
Learn More
Reserve Now & Pay Later
We'll reserve your spot today, and you can cancel up to two days* before your experience without making a payment. Secure your spot with ease, stay flexible, and never miss out.
How it works
Find your experience
Choose the experience you want knowing you can secure your spot without being locked in.
Make a reservation
Reserve now and pay later to secure your spot, commitment-free.
Choose when to pay
Come back to pay once your plans are set, or let auto-pay kick in two days* before your experience.
Enjoy your experience
Now you're all set! Have a great time.
Frequently Asked Questions  | Terms & Conditions
*Up to 9 days depending on the booking/product
Reserve Now & Pay Later
Secure your must-do activities without being locked in
Learn More

Explore the historic UNESCO World Heritage city of Bordeaux, home to one of Europe’s largest collection of 18th-century architecture. Take a walking tour of historic Bordeaux with your guide who will tailor the excursion to your tastes and introduce you to the city’s beautiful buildings. You can take the tour at your own pace and rhythm. Your guide will tell stories about the famous Alienor Queen of England in the middle ages. Naturally, as the center of one of the world’s best-known wine producing regions, you will to the village of Margaux known for its famous vineyards. Finally, reach the docks which offer a splendid view of the city and the Port of the Moon with its oldest bridge, the Pont de Pierre.
...  More
From
US$335.35
From
US$335.35
Learn More

5
The World Famous Wine Regions in One Day ! Have a breathtaking wine tour, be amazed by the contrast of two Châteaux located in BOTH of the most world known wine regions, Saint-Emilion & Médoc. Relax in the comfort of a small group tour with a knowledgeable and friendly English speaking guide. Your first stop is in the UNESCO-listed medieval village of Saint-Emilion, take in the amazing picturesque scenery, filled with history, and taste excellent wines. Back to Bordeaux center, experience a delicious French lunch and some local specialties. Afterward, you will drive through the spectacular Medoc "Route des Châteaux" which combines nature & culture. There you will find predominately Cabernet Sauvignon based wines and of course, more wine tastings... Join us !
...  More
From
US$173.15
From
US$173.15
Learn More

2
Tour scenic vineyards and sample local wines on this small-group excursion from Bordeaux. Learn about the winemaking process at a traditional family château in Margaux and enjoy a tasting of wines. Visit a prestigious classified winery for another tasting. Your tour concludes with an aperitif and delicious French treats.
...  More
From
US$81.57
From
US$81.57
Learn More

Tours on the Wine Route

Enjoy our tours on our beautiful region, Medoc or Saint Emilion, or 2, do not hesitate to discover our sights and tastings, which will delight your eyes and your taste buds.
...  More
From
US$112.16
From
US$112.16
Learn More

On our tour you will experience two famous classified growth chateaux and taste the wines Bordeaux is famous for. We will take you to two pre-selected grand cru classe chateaux in the Margaux appellation within the Medoc wine region just for your group of up to 4 people. Your will see enjoy the views of vineyards, visit wineries and taste at least 4 wines from the world-famous Margaux area. During the ride our wine-expert guide will share all their knowledge of the region and its wines. Please note that tasting fees are payable directly to wineries in cash or by card (they are approximately 15 euros per person per winery).
...  More
From
US$321.01
per group
From
US$321.01
per group
Learn More

2
Discover the Médoc red wine region on a private tour from Bordeaux. With a guide who is dedicated to your own group, you’ll call in at three esteemed wine chateaux for tastings and cellar visits. Plus, stop for plenty of photo stops at other renowned wine estates around the region.
...  More
From
US$623.50
Price varies by group size
From
US$623.50
Price varies by group size
Learn More

Explore the Chateaux de Medoc (D2) wine road with a local guide. Sit back and take in the scenery as your driver navigates the route, answering any questions you may have about the local wine scene. Tastings at two wineries, as well as a 3-course lunch, are included. Other stops along the way can be accommodated—possibilities include an artisan chocolate shop, markets, fish farms, wine and horse museums, gardens, and art galleries.
...  More
From
US$406.71
Price varies by group size
From
US$406.71
Price varies by group size
Learn More

2
Delve into France’s fertile winemaking country on this 9-hour private Médoc Route des Châteaux wine-tasting experience from Bordeaux. Travel along the Médoc’s wine route as your private guide sheds light on the region’s rich winemaking heritage. Enjoy fine views over the sun-soaked landscapes and discover famous local appellations including Pauillac and Margaux. Visit three wineries to taste their fine wines, and enjoy a traditional apéritif in the vineyards. Sample different grape varietals during a blending session and mix them to your tastes to make your own wine.
...  More
From
US$444.47
Price varies by group size
From
US$444.47
Price varies by group size
Learn More

4
Looking for a truly original excursion in the vineyard, source of good mood, of share and unexpected? Discover the Médoc vineyard in a mythical convertible car! Welcomed by a cultured and elegant chauffeur, you'll enjoy his funny and unknown anecdotes about Médoc. Along this excursion, you will have a visit to a grand cru classé from 1855 and a family estate. Each château will offer you the opportunity to taste between 2 and 3 of their wines. Your chauffeur will take the time to show you the well-known "route des châteaux", the village of Margaux as well as the world-famous Château Margaux. Do you have the spirit of an adventurer? If you wish, you can take the wheel of your 2CV on a small country road! * * You need to have a valid driving license with you. ** Each 2CV can take a maximum of 3 people (plus the chauffeur). If you book for 2 people you will have one 2CV. If you book for 6 people you will have two 2CVs, etc. When there are several 2CVs, we drive in convoy.
...  More
From
US$258.31
Price varies by group size
From
US$258.31
Price varies by group size
Learn More

Things to do near Aquitaine