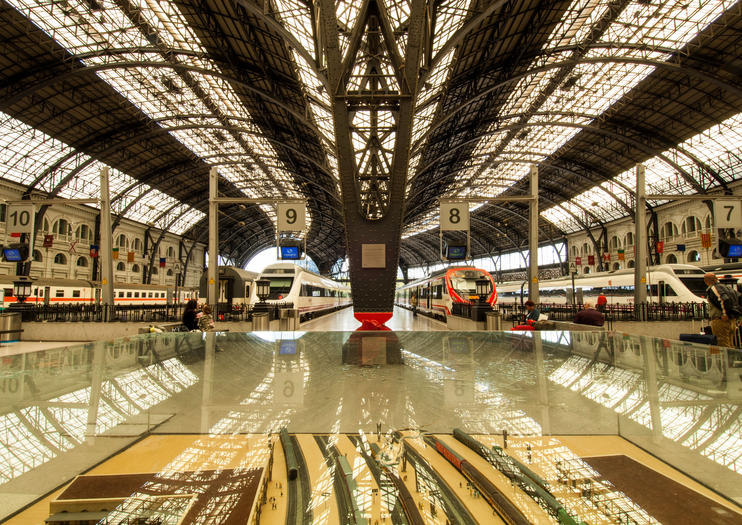 As much an architectural treasure as it is a train station, Barcelona’s França Railway Station is well worth a visit, if only to marvel at its design. The structure, originally built in 1854, has been renovated twice: once for the 1929 International Exposition, which was hosted by Barcelona, once in 1988, ahead of the 1992 Olympic Games.
The Basics
França is the second busiest railway station in the city, but it’s regarded as the most beautiful. When the lobby of the station was redesigned in the 1920s, architects incorporated the classical noucentista style and added marble, bronze, and crystal decor, as well as a curved glass and metal canopy that stretches over the station’s 12 tracks.
Visit the station on an architecture-focused walking tour that stops at França as well as spots like the Gothic Quarter and cast-iron marketplace in El Born. You can also take a tour to sights that have been important in the history of the Catalan independence movement. Alternatively, opt for an organized treasure hunt, which will take you to sights around the city (including the train station).
Things to Know Before You Go
How to Get There
To reach França, via public transportation, take the metro to the Barceloneta station, located just a short walk from. The Aerobús A1 also has a stop right outside the station.
When to Get There
The ticket office opens in the early hours of the morning, and trains begin to run around 5 a.m. If you’re an early bird, visit the station when it opens, to admire the architecture while it’s peaceful and quiet.
In the Details
Modernism was a prominent design style in Barcelona throughout the late 19th and early 20th centuries. The França Railway Station, however, was built in the noucentisme style, which was a cultural and artistic reaction to modernism. The station is divided into two sections: the lobby and the train shed. The lobby, designed by Spanish architect Raimon Duran i Reynals, features a sleek corridor with a towering dome.
Address: Avenida Marqués de L'Argentera , s/n, Barcelona, Catalonia 08003, Spain
Read MoreShow Less

Clear all
Apply
Select Dates
Today
Tomorrow
Price & Deals
US$
US$
Time
Time of DayDuration
Rating
More
Did you know?You can reserve your spot today and pay when you're ready.
Learn more
Did you know?
You can reserve your spot today and pay when you're ready.Learn more
Reserve Now & Pay Later
We'll reserve your spot today, and you can cancel up to two days before your experience without making a payment. Secure your spot with ease, stay flexible, and never miss out.
How it works
Find your experience
Choose the experience you want knowing you can secure your spot without being locked in.
Make a reservation
Reserve now and pay later to secure your spot, commitment-free.
Choose when to pay
Come back to pay once your plans are set, or let auto-pay kick in two days before your experience.
Enjoy your experience
Now you're all set! Have a great time.
Frequently Asked Questions  | Terms & Conditions
Sort by:Featured
Featured
Traveler Rating
Price (Low to High)
Price (High to Low)
Duration (Short to Long)
Duration (Long to Short)
New on Viator

152
Explore Barcelona by Segway, the fastest way to get around the city’s top attractions. Choose your tour duration, then depart from Las Ramblas, with multiple departure times to fit your travel schedule. Your guide shares stories and curiosities of the Mediterranean city on this small-group experience, limited to six people.
...  More
From
US$42.90
From
US$42.90
Learn More

265
Discover the Gothic grandeur and maritime charm of Barcelona on a smooth, self-balancing Segway. Follow a knowledgeable guide on an exciting route through the city’s winding streets and hear tales of Barcelona’s fascinating history. Travel from the Arc de Triomf and the Parc de la Ciutadella, and then continue around the old harbor at Port Vell in La Barceloneta. See the city’s stylish side when you visit the modern monuments in Olympic Port and enjoy an intimate atmosphere on this small-group tour, with numbers limited to six people.
...  More
Small group
From
US$53.90
Price varies by group size
From
US$53.90
Price varies by group size
Learn More

This tour through the Old City of Barcelona will investigate both historical and cultural reasons why many, but certainly not a majority, of Catalans feel the need for their regional government to push towards statehood. On October 27th, 2017, due to an ‘illegal’ referendum, Spain shut down the Catalan parliament and issued arrest warrants for all of the Regional Ministers, including the President, Carles Puigdemont. As of February 2019, thirteen ministers are undergoing a lengthy treason trial in Madrid and Puigdemont lives in exile between Brussels and Berlin. How did this all come about? How long has this issue been bubbling under the surface? How could the stand-off impact the future of the European Union? Would Spain concede territory that it appropriated over 300 years ago? Is there a renewed threat of an armed struggle? These are just some of the questions we will address, from all sides of the political spectrum.
...  More
Private experience
From
US$59.70
Price varies by group size
From
US$59.70
Price varies by group size
Learn More
Reserve Now & Pay Later
We'll reserve your spot today, and you can cancel up to two days before your experience without making a payment. Secure your spot with ease, stay flexible, and never miss out.
How it works
Find your experience
Choose the experience you want knowing you can secure your spot without being locked in.
Make a reservation
Reserve now and pay later to secure your spot, commitment-free.
Choose when to pay
Come back to pay once your plans are set, or let auto-pay kick in two days before your experience.
Enjoy your experience
Now you're all set! Have a great time.
Frequently Asked Questions  | Terms & Conditions
Reserve Now & Pay Later
Secure your must-do activities without being locked in
Learn More

2
Experience a long list of Barcelona attractions in just three hours on a small-group Segway tour. Choose from seven convenient start times and enjoy a short training session before the sightseeing begins. Together with your guide, visit the Gothic Quarter, Maremagnum, and far beyond without getting tired. With maximum six people in your group, you get a more intimate experience and can feel free interact with your guide at any time.
...  More
Private experience
From
US$110.82
From
US$110.82
Learn More

13
Explore the Montjuic neighborhood of Barcelona during this 2-hour small-group Segway tour. Cruise past key landmarks such as Ciutadella Park, the Olympic Stadium, the National Palace, and Montjuic Castle with ease aboard your Segway. Learn more about Barcelona’s rich history, which began over 2,000 years ago on Montjuic, and enjoy panoramic views of the city during the tour.
...  More
From
US$75.90
Price varies by group size
From
US$75.90
Price varies by group size
Learn More

9
Discover Barcelona’s rich architectural tableau on a compelling morning, afternoon or full-day walking tour led by an accomplished guide. On this Viator Exclusive tour, follow an architectural specialist around the city and see magnificent structures from a variety of historical periods. According to your interests, choose a morning tour around the medieval myriad of the Old Quarter; satisfy cultural cravings on a 3km afternoon tour of the innovative waterfront buildings; or combine both in an enriching full-day tour. An intimate experience is guaranteed on this small-group tour, on which numbers are limited to nine people.
...  More
From
US$63.36
From
US$63.36
Learn More

10
Barcelona's 1992 Olympic Games brought more than just medals to the city—it also brought changes to the city, including the Olympic Port. This Barcelona Segway tour shows you the city through the lens of the Olympic Games, while also passing through essential Barcelona sights such as Ciutadella Park and the Born district.
...  More
From
US$42.90
From
US$42.90
Learn More

22
Cruise through Barcelona on this classic Segway tour. Begin your tour near the Ramblas, and visit the Colón monument and Maritime Museum. Ride through the medieval streets of the Gothic Quarter and past the trendy boutiques and cafés of El Born. See the Parc de la Ciutadella, the Arc of Triumph, the Olympic Village and Olympic Port, and the lively seaside neighborhood of Barceloneta.
...  More
From
US$53.90
From
US$53.90
Learn More

9
See more of the city in a shorter amount of time on this guided, Segway tour of Ciutadella Park and beyond. Pack in the sights by gliding through Las Ramblas, Port Vell, and onward to the park to see historic buildings, landmarks, and plazas. Stop by early works of Antoni Gaudi within the park and get your picture at the city’s Arc de Triomf.
...  More
From
US$31.90
From
US$31.90
Learn More

1
Let’s go to search for a treasure! There are a lot of them In Barcelona. Hidden. In the small streets of the Gothic Quarter, in the large squares, near the cathedrals. If you know how to read hidden messages, solve puzzles and want to know more historical information about the city by touching it with your hands, this tour is what you are looking for. And the treasure is real.
...  More
Small group
From
US$97.01
From
US$97.01
Learn More

8
See the best of Barcelona in three-hours via Segway. The tour is ideal for people who want to discover the city in the outdoors, but are short on time or have limited mobility. You have the flexibility to choose from three possible start times and four different language options. After a brief training session, follow your guide to explore Parc de la Ciutadella, Barceloneta, and beyond.
...  More
From
US$75.90
From
US$75.90
Learn More

9
See the ever-present works of the master of Gothic architect, Antoni Gaudi, on this half-day, guided, Segway tour. Let the Segway do the walking as you glide with your guide to see the unusual shapes, materials, and curves that define Gothic buildings and monuments like the Arc de Triomf. Ride among the modernist buildings on Passeig de Gracia and visit one of Gaudi’s greatest achievemnts: La Sagrada Familia.
...  More
From
US$64.90
From
US$64.90
Learn More

Things to do near Barcelona