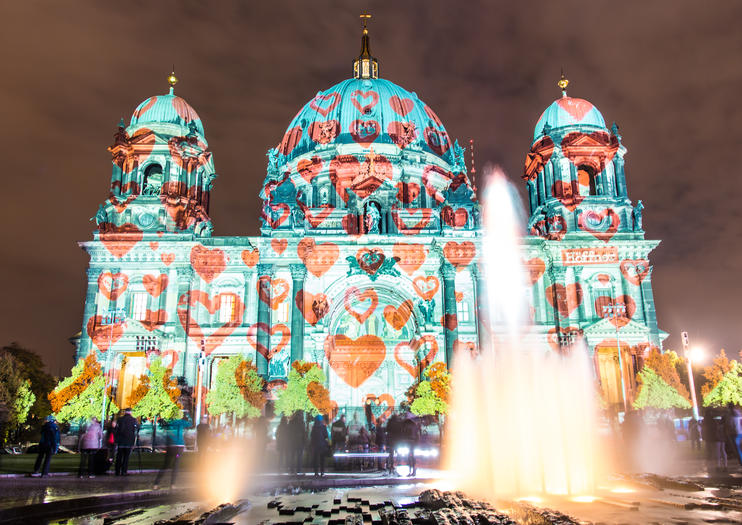 Berlin is one of the world’s best cities for nightlife. From sunset until dawn, the German capital positively pulses with life. Among the highlights of Berlin’s many after-dark activities are its dazzling light festivals. See below to find out more about two of the brightest and best.
Berlin Festival of Lights
Brightening up Berlin for about 10 days every October, this popular festival sees the city’s most famous landmarks set aglow. Iconic sights such as the Berlin Television Tower (Berliner Fernsehturm) and Potsdamer Platz are illuminated with colorful displays, with light artists from Germany and beyond creating spectacular light projections using video mapping and eye-popping light art installations. If you want to experience the magic without having to navigate in the dark, opt for a light art evening city tour that takes you to all the most striking illuminations.
Berlin Illuminated
Beginning in late September and running in tandem with October’s Berlin Festival of Lights, Berlin Illuminated (known to locals as Berlin Leuchtet) is the perfect complement to the Festival of Lights. Together they are known as Berlin Lights Week. As in its sister festival, artists use the city’s infrastructure—including squares, bridges, and monuments like the Berlin Cathedral (Berliner Dom), the Victory Column, and the Brandenburg Gate—as canvases for projections, laser shows, and other glimmering extravaganzas. Like the Berlin Festival of Lights, all Berlin Illuminated installations are free to view.
Read MoreShow Less
Berlin Tours & Activities (0)
Filter
•