Top Castles and Fortresses in Transylvania 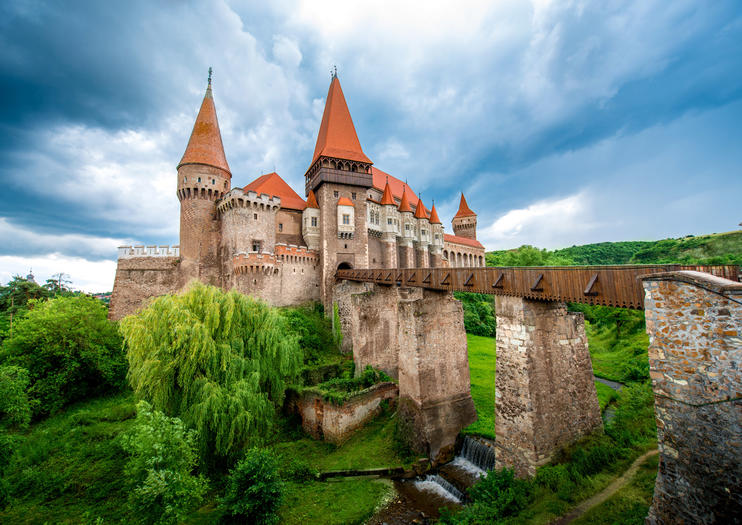 Stirring the imagination with legends of medieval sieges, bloodthirsty counts, and royal intrigue, Transylvania’s Saxon castles are a major draw for visitors to Romania. From crumbling fortresses to elegant estates, here are the region’s must-see castles, all accessible by car from Bucharest or Brasov.
Bran Castle
Also known by its nickname, Dracula’s Castle, this well-restored medieval haunt seems a fitting residence for Bram Stoker’s mythical vampire—though any connection to the real-life Vlad the Impaler is murky. Straddling the border of Transylvania and Wallachia near the village of Bran, the castle’s red-roofed towers and delightfully Gothic rooms can be toured independently or with a guide.
Peles Castle
The one-time summer residence of the Romanian royal family, this storybook neo-Renaissance palace tucked into a forest near Sinaia is considered by some to be the most beautiful in the country, and perhaps all of Eastern Europe. Admire lush baroque furnishings and art on a guided tour, and check out nearby Pelisor Castle, a smaller art nouveau manor in the same complex, if you have time.
Rasnov Fortress
Partially in ruins, this imposing hilltop citadel in the foothills of the Carpathian Mountains was built in the 13th century as a refuge from marauding Tartar armies. Learn about medieval warfare and sieges while exploring the crumbling courtyard and ramparts of the walled compound.
Rupea Citadel
Recently renovated by the Romanian government, this fortress near the city of Brasov sits atop one of the country’s oldest archaeological sites. The current hilltop citadel dates back to the 14th century and was used as a refuge from invading Turkish and Hungarian armies, plague, and other medieval threats.
Read MoreShow Less
Brasov Tours & Activities (12)
Filter
•

463
Explore the remains of Dracula’s Castle on this small-group day trip from Bucharest. Meet your English-speaking guide in Bucharest, then travel by minibus to Transylvania. Admire the scenery beyond the window on the leisurely drive into the country, an ideal prelude to two of Romania’s most stunning castles, Peles Castle and Bran (Dracula’s) Castle. Hit the charming city of Brasov in south Transylvania. Please note that when Peles Castle is closed, you visit the Cantacuzino Palace instead.
...  More
From
US$106.62
From
US$106.62
Learn More

321
Immerse yourself in the legends of Transylvania with a visit to Bran Castle and Râșnov Fortress. Departing from Braşov, the half-day hour tour begins with a stop at Râșnov to explore its imposing, 13th-century fortress. Next up is Bran Castle, also known as ‘Dracula’s Castle’ — a hilltop estate that conjures up visions of howling wolves and bats fluttering in the moonlight. Wander the castle’s Gothic chambers and learn about its ties to Bram Stoker’s undead antihero. Upgrade when booking your experience and extend your tour to the beautifully ornate Peleș Castle.
...  More
From
US$28.78
From
US$28.78
Learn More

52
Explore three historic highlights of Transylvania on a fascinating day trip from Brașov. Visit a UNESCO World Heritage-listed church in the medieval village of Viscri, and wander through the fortified Saxon town of Sighişoara — known as the birthplace of the warlord who inspired Bram Stoker’s Count Dracula. Finally, learn the history of the imposing, 14th-century Rupea Fortress on a guided tour.
...  More
From
US$57.55
From
US$57.55
Learn More

3
The legendary heart of Romania, Transylvania is a land of age-old myths and striking natural beauty, with medieval villages that appear preserved in time nestled in the shadow of the Carpathians. Explore the region’s fascinating castles, palaces, fortresses and medieval villages on this packed 2-day tour from Bucharest. Unlock the mysteries of the Dracula legend, see where Romanian royalty once rested their heads and experience the traditional hospitality of the Transylvanian countryside. Stay overnight in the atmospheric village of Sighisoara, birthplace of bloodthirsty Vlad the Impaler.
...  More
From
US$360.07
Price varies by group size
From
US$360.07
Price varies by group size
Learn More

1
Spend two days immersed in the medieval legends and dramatic scenery of Transylvania on this guided tour from Brasov that combines the best of Romanian culture and nature. Hike among the most majestic peaks of the Carpathians in Piatra Craiului National Park, tap into the region’s vampiric lore at Bran Castle, and imagine medieval sieges at imposing Rasnov Fortress. Get a taste of mountain village life with an overnight stay at a local guesthouse and included meals.
...  More
From
US$229.05
From
US$229.05
Learn More

8
Immerse yourself in the unique culture, history and flavors of Romania on a private 8-day tour that takes you to the most fascinating villages and monuments of Transylvania. Departing from Bucharest, travel in a private vehicle through the country’s historic heart, staying in medieval villages and touring Gothic castles, splendid palaces, imposing fortress, monasteries and other historic gems. Overnight accommodation and all transport are arranged by your private guide, so you can relax and enjoy your Romanian holiday!
...  More
From
US$1,511.26
Price varies by group size
From
US$1,511.26
Price varies by group size
Learn More

3
Immerse yourself in the Gothic legends and dramatic architecture of Transylvania on this private full-day tour of Bran Castle (Dracula’s Castle) and Rasnov Fortress. Ideal for travelers with limited time in Transylvania, this 11-hour excursion allows you to tick off four highlights in just one day. Take guided tours of Bran Castle and the Rasnov Fortress, stop to sample Romanian specialties, and travel back to the prehistoric ages at Dino Parc. Entrance fees and lunch are not included, however round-trip hotel transport from Brasov is.
...  More
From
US$44.28
From
US$44.28
Learn More

Day Trip to Transylvania including Walachia and Prahova Valley

Explore many of Romania’s most famous natural and cultural highlights on a private, full-day tour from Bucharest to the atmospheric regions of Wallachia, Transylvania and the Prahova Valley. Admire the towering ‘Alps of Romania,’ pass through traditional rural villages and tour the country’s two most famous castles, Peles and Bran. You’ll also have time to stroll through the old Saxon town of Brasov, known for its iconic Black Church. Enjoy the customized nature of a private tour and the devoted attention of your guide.
...  More
From
US$324.65
From
US$324.65
Learn More

Romania is home to many romantic, historic, fairytale-type castles. On this convenient two-day tour from Bucharest, you will visit some of the most famous and beautiful. Taking this private tour will save you time, as you don’t have to worry about figuring out how to get to the castles. Visit UNESCO World Heritage Sites, Bran Castle of Dracula fame, and many other impressive castles.
...  More
From
US$345.30
From
US$345.30
Learn More

5
Experience the best of Romania’s scenic beauty and cultural attractions on this budget-friendly 6-day tour beginning and ending in Bucharest. Leave the planning and transportation to your local guide and enjoy a diverse itinerary that takes you from the mud volcanoes of Bucovina to the birthplace of Dracula in medieval Sighisoara, from the Neo-Renaissance splendor of Peles Castle in Sinaia to the UNESCO-listed settlement of Biertan. Stay overnight in hand-picked B&B-style inns.
...  More
From
US$1,210.04
From
US$1,210.04
Learn More

1
Our country has 27 UNESCO World Heritage objectives. Another 14 are in the process of analysis, expecting to be included in the World Heritage. Medieval Fortresses and fortified churches from Transylvania, Painted Monasteries from Bucovina, Wooden Churches from Maramures and the Danube Delta, all are included in UNESCO World Heritage. Spend 11 days discovering as many of these beautiful sites as you can take in.
...  More
From
US$1,841.60
From
US$1,841.60
Learn More

1
Immerse in the mysterious Transylvania landscape on this 5-day private tour, from Bucharest. This immersive tour gets you away from the crowds and into the core of Romania, with the ease of a professional guide by your side. You’ll cover all of Transylvania’s main points of interest, and then some.
...  More
From
US$817.51
From
US$817.51
Learn More