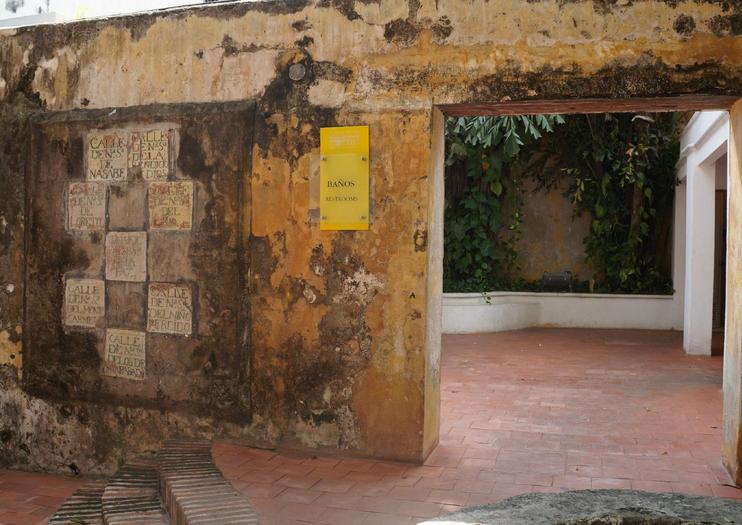 This fun little museum on Plaza Bolivar, in an impressive 18th-century mansion, already attracts the morbidly inclined. Your tour begins with two entire rooms full of horrifying torture devices, used right here by the Cartagena chapter of the Spanish Inquisition. Between 1776 and 1821, when Independence heroes banned the practice, hundreds of people were tortured, and some killed, on suspicion of heresy or dabbling in witchcraft.

The Inquisition and the people of Cartagena: Pain and Hope

1
Experience a sensorial and historical experience with MUHCA's Soundwalk, with the director of the Museum, Moisés Álvarez, renowned researcher and historian, who guides you through the halls of the building, and introduces you to two of the great protagonists of the Inquisition: Tomás de Torquemada, the leader of the inquisition in Spain of the fifteenth century and Paula Eguiluz, accused in the court of Cartagena of the times for witchcraft, who tells you his version of the facts inviting you through a spell a journey in time and re- To know the town of Cartagena for what it is, a mixture of cultures and races. Between these illustrious personages you will be able to know the history of the whole building, that is divided in the history of the Inquisition, and in the history of the city of Cartagena de Indias.
…More
From
US$6.99
From
US$6.99

Republican Architecture Tour in Cartagena: Behind the History

1
ACTORS PERFORM DIRECTLY TO YOUR HEADSET TOGETHER WITH 3D SOUND EFFECTS. Jaspe, the creator of the city’s Clock Tower and the Adolfo Mejia Theater, takes you back in time, helping you explore Cartagena’s best Post-Colonial Architecture. This elegant and charming character will conquer your heart as he helps you discover the brilliance of Colombia’s famed era of architecture, known as the Republican Period.
…More
From
US$6.99
From
US$6.99

Functional training is a great trend worldwide, and that is why we believe that our group and personalized outdoor classes are an excellent way to be in connection with the environment of our magical city. This workout incorporates natural day to day movements into a free style 1-hour session designed to strengthen the body to function, play and work with more energy and strength and fewer injuries in this session in Cartagena's beach "Playa de la Artillería". A variety of exciting equipment and body weights are used to get results.
…More
From
US$160.00
From
US$160.00
Face masks required for travelers in public areas
Face masks required for guides in public areas
Face masks provided for travelers
Learn More
Taking safety measures

Things to do near Cartagena