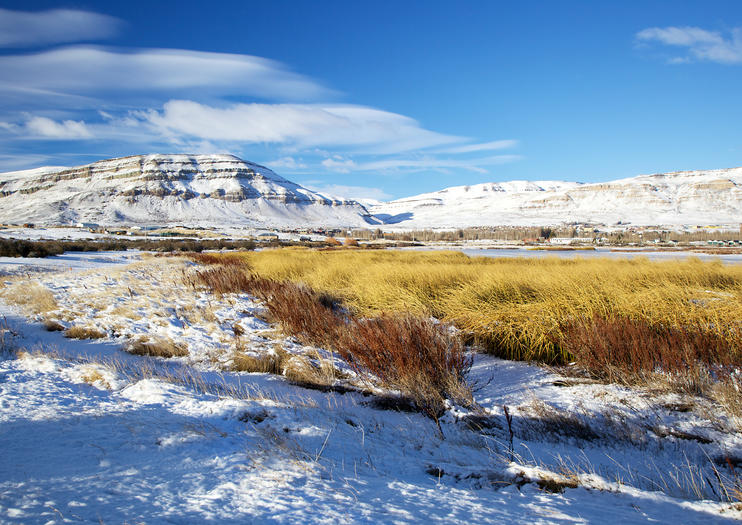 Located on the southern shore of Argentino Lake, Nimez Lagoon Nature Reserve (Laguna Nimez Reserve) is framed by the snow-capped peaks of the Andes mountains and serves as a haven for the region’s wildlife. The beaches and marshlands of the reserve harbor more than 80 species of Patagonian and migratory birds.

The Basics
Explore the reserve on foot on a self-guided tour that follows a 1.5-mile (2.5-kilometer) walking trail around the two lagoons; the many observation shelters along the route increase your chances of spotting birdlife. Located just outside of El Calafate, the reserve is included on most city and bike tours of the lakeside, which typically cover the Walichu Caves and the Old Town of El Calafate.

How to Get There
The Nimez Lagoon Nature Reserve lies one mile (1.5-kilometers) north of El Calafate on the south shore of Argentino Lake. It’s possible to walk (around 20 minutes), cycle (less than 10 minutes), or take a taxi (around 5 minutes) from downtown El Calafate.

When to Get There
Spring and summer are the most popular time to visit, when the highest number of migratory birds are present in the reserve. The best time for bird watching is in the early morning or evening, when the birds are most active.

6
Tour El Calafate and the Walichu Caves' ancient art on this 3-hour coach tour with an informative guide who shares about the history, population and unique geological features of this region. Visit the banks of Lago Argentino to view the rock paintings in Walichu Caves, which date back 4,000 years. Enjoy an informative tour of Old Town Calafate including the El Calafate Historical Interpretation Center, then view local bird life at Laguna Nimez. Includes hotel pickup and drop-off in El Calafate.
…More
From
US$66.70
From
US$66.70
Face masks required for travelers in public areas
Face masks required for guides in public areas
Hand sanitizer available to travelers and staff
Learn More
Taking safety measures

2
Learn about Patagonia’s people and history on a guided tour of El Calafate. Explore the city’s historic center on foot, stop at a local orchard for a lesson in cultivating fruit, and use the binoculars your guide provides to dabble in a bit of bird-watching. The tour also includes coach or minivan transport to and from your hotel.
…More
From
US$73.80
From
US$73.80
Face masks required for travelers in public areas
Face masks required for guides in public areas
Hand sanitizer available to travelers and staff
Learn More
Taking safety measures

6
You can feel in balance with all the nature surrounding driving a bamboo vehicle in complety silence and using your sense to capture the inmensive of the pristine nature arround the Lake, mountains, and sky...
…More
From
US$15.00
From
US$15.00

Things to do near El Calafate