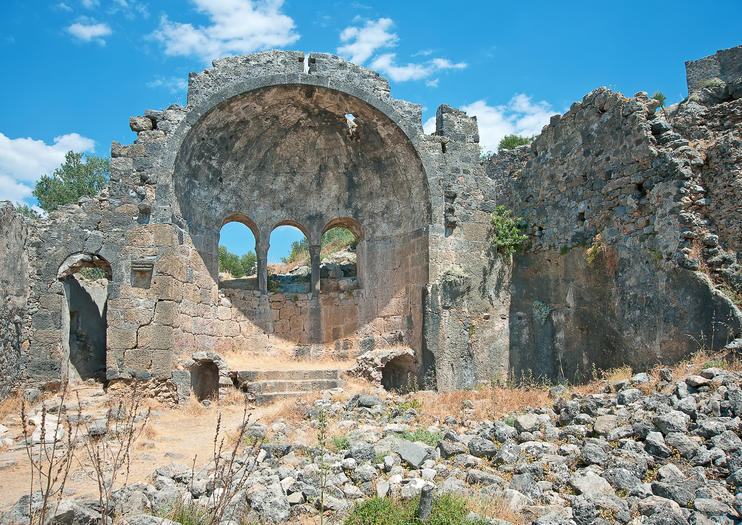 Known in English as St Nicholas Island, Gemiler Island (Gemiler Adası) lies along the Mediterranean coast of Turkey, south from Fethiye and west of the sandy beach at Ölüdeniz. Separated from the mainland by a narrow sea channel, it is a tiny speck of an islet, just 400 meters (1,312 feet) wide and 1,000 meters (3,280 feet) long but is renowned for its wealth of Byzantine ruins, which date back more than 1,500 years.
Gemiler Island was once one of Christendom’s most popular pilgrimage points with devotees heading for Jerusalem in the Middle Ages. They came to honor the tomb of St. Nicholas – the original Father Christmas, who was Bishop of Myra on the Turkish coast opposite. Even though his remains were moved to the mainland in 650 AD, the island is still occasionally known as St. Nicholas Island. Also around this time, the little Byzantine settlement on Gemiler came under threat from pirates and was abandoned as the residents moved to the mainland for protection.
Today a chaotic jumble of ruins covers much of the island, comprising the scattered remains of four churches, evidence of Byzantine houses, a port, waterways, tombs and graveyards. Stores once stood along the shoreline, where traders would sell olive oil and grain to passing ships. The fragments of St Nicholas’s tomb that still stand today reveal faint vestiges of frescoes depicting scenes from his life; these are open to the elements and are slowly deteriorating in the sun.
Gemiler has plenty of rocky bays providing safe mooring for yachts and provides excellent snorkeling along its coastline; tumbledown ruins can occasionally be spotted just below the surface of the sea.

1
Olympos, Demre, St.Nicholas Church, Myra, Andriace, Gokkaya Bay, Simena, Sunken City, Kekova, Kas, Firnaz Bay, Butterfly Valley, St.Nicholas Island, Oludeniz, Fethiye is the places that you will see on this 3 night 4 day cruise. Olympos to Fethiye Cruise is the best choice if you would like to explore Turkey's Aegean and Mediterranean shores. You will also have the chance to see the Lycian way.
...  More
From
US$384.63
From
US$384.63
Learn More

8
Cruise to Butterfly Valley and Gemiler Island, also called St. Nicholas Island, on a full-day sailing excursion from the Blue Lagoon in Oludeniz, and enjoy a day of sun, sea, and exploring on the spectacular Turkish coast. This full-day cruise includes a grilled lunch on deck, as well as pickup and drop-off at hotels in selected areas.
...  More
From
US$25.26
From
US$25.26
Learn More