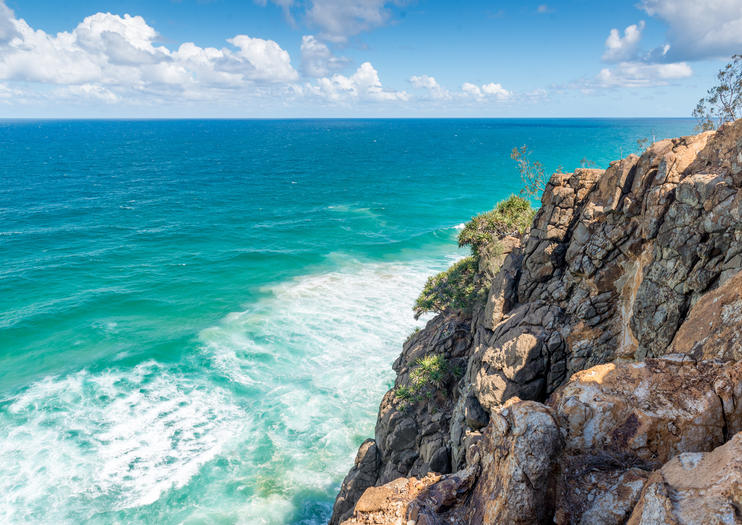 Located along the eastern edge of Fraser Island on the popular Seventy Five Mile Beach, Indian Head was named by the famous Captain Cook upon his arrival in 1770. Visitors flock to this popular landmark for its incredible 360-degree views of the island, the ocean and some of the country’s most exotic wildlife.
Indian Head is one of only three rocky outcrops on the island, and while camping is not allowed here, the area’s towering peaks attract plenty of travelers. On clear days visitors can look out across some 75 miles of beach and may even spot whales, sharks, dolphins and sea turtles from atop Indian Head.

278
Named K’Gari (paradise) by the local Aborigines, Fraser Island features more than 100 freshwater lakes, extensive rain forests, and giant sand dunes. Explore the island with an expert guide who leads rainforest walks at Pile Valley, Central Station, Wanggoolba Creek, and the Hammerstone Sandblow, and provides swimming opportunities at Eli Creek, Lake McKenzie, the Champagne Pools, and Lake Wabby. Stay overnight at a lodge on Seventy-Five Mile Beach, see the Pinnacles and Maheno shipwreck, and have the option to book a scenic sightseeing flight on this fun and informative 2-day tour.
…More
From
US$295.12
From
US$295.12
Hand sanitizer available to travelers and staff
Regularly sanitized high-traffic areas
Gear/equipment sanitized between use
Learn More
Taking safety measures

Things to do near Fraser Island