How to Spend 2 Days in Giza 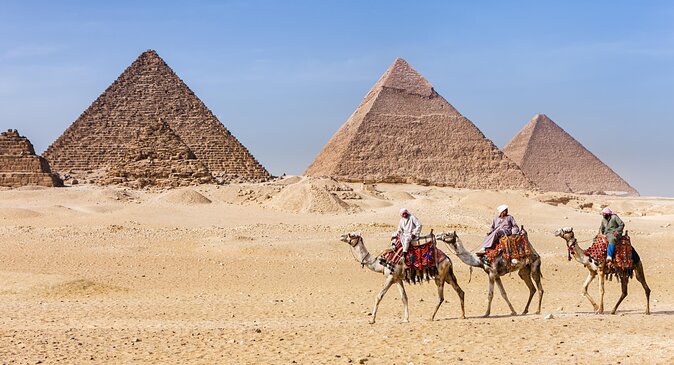 With two days in Giza, there’s time to check out not just the pyramids at the Giza Plateau but also the highlights of Cairo, from its Citadel to the Egyptian Museum. Here are our ideas for the ultimate 2-day stay in Giza.

**Morning:**Most visitors head straight for the Giza Pyramids, so follow their cue. Book a private tour and marvel at the biggest—the Great Pyramid of Cheops—as your Egyptologist guide explains how it was built and why. Then, admire the neighboring pyramids and Great Sphinx before seeing the incredible ancient Egyptian barge at the plateau’s Solar Boat Museum.

**Afternoon:**With Giza done, venture south to the age-old necropolis of Saqqara. Admire its Step Pyramid—the world’s oldest pyramid—before visiting the Memphis Open-Air Museum, filled with the remnants of ancient Egypt’s capital. View the relics, including a gigantic fallen statue of Ramses II, before exploring nearby Dahshur, another pyramid-studded burial ground.

**Evening:**Take in Giza’s sound-and-light spectacle tonight. Watch lasers and projections bathe the pyramids in color as a narrator charts their story to music. Alternatively, set off on a camel or horse trek on the Giza Plateau to view the pyramids at sundown.

**Morning:**Set your sights on Cairo today, perhaps beginning with a tour of the Egyptian Museum to see some of its 120,000 ancient finds, including the treasures of Tutankhamun. Some tours round out a visit here with an optional River Nile felucca sailboat ride or souvenir-hunting time at Cairo’s Khan El Khalili bazaar.

**Afternoon:**If you’re already on a full-day Cairo tour, head for the old city to view the Saladin Citadel, Coptic churches, Ben Ezra Synagogue, and other historical highlights. Otherwise, take a break from sightseeing and kick up the dust on an all-terrain vehicle (ATV) on the desert of the Giza Plateau.

**Evening:**If you missed an ATV ride earlier, grab your chance this evening: The sun setting over the pyramids and Cairo’s cityscape will make it extra memorable. Or, combine a last dash of sightseeing with a romantic dinner on a River Nile cruise.

5 Tours and Activities | All Giza Tours

31
Visit the Egyptian Museum, Cairo Citadel, and Khan Al-Khalili bazaar on a full-day private tour in Cairo, including lunch. With an Egyptologist guide beside you, step back through the millennia at the atmospheric Egyptian Museum. Marvel at Tutankhamun’s gold treasures, gaze at ancient mummified animals, and peer into the faces of long-ago pharaohs at the Royal Mummy Halls. After lunch on a leafy River Nile island, visit the Mohammed Ali Mosque at the Citadel of Saladin, and barter for souvenirs at the chaotic Khan El Khalili.
…More
From
US$46.44
From
US$46.44

1
The world-renowned Egyptian Museum is home to works collected from 5,000 years of history, including such artifacts as the gold mask of Tutankhamun. Visiting in the company of an Egyptologist guide offers a far more rewarding experience than alone. This private museum tour includes round-trip hotel transfers.
…More
From
US$60.00
Price varies by group size
From
US$60.00
Price varies by group size
Face masks required for travelers in public areas
Face masks required for guides in public areas
Face masks provided for travelers
Learn More
Taking safety measures

5
The sound and light show at Giza brings Egypt’s ancient history to life, and the family-friendly experience is one of Cairo’s most beloved attractions. See the show hassle-free by pre-booking tickets, with private transport to the Giza Plateau from your Cairo or Giza hotel in an air-conditioned van equipped with onboard Wi-Fi.
…More
From
US$39.00
From
US$39.00
Face masks required for travelers in public areas
Face masks required for guides in public areas
Face masks provided for travelers
Learn More
Taking safety measures

Combine a guided tour of Egypt’s most renowned pyramid complexes with a scenic Nile dinner cruise on this two-for-one private tour. Join an Egyptologist guide for an in-depth run-down of key sites in Giza, Dahshur, and Sakkara, followed by a camel ride through the desert. Then, hop a riverboat for an evening under the stars, with a savory buffet and dance-filled Tannoura show.
…More
From
US$85.80
From
US$85.80
Face masks required for travelers in public areas
Face masks required for guides in public areas
Face masks provided for travelers
Learn More
Taking safety measures