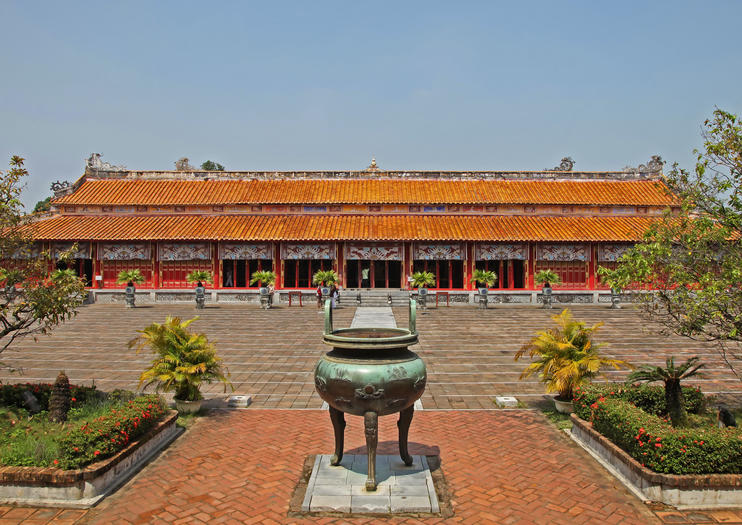 The Forbidden Purple City (Tử Cấm Thành), which sits at the center of Hue’s Imperial Enclosure, was once reserved for exclusive use by the emperor of the Nguyen Dynasty. Only eunuchs passed through its halls, since even his most trusted servants weren’t allowed beyond the gates. Today, this historic citadel sits mostly in ruins, destroyed during several wars throughout the nation’s history. Despite some recent rebuilding efforts, travelers can easily spend a long afternoon wandering paths that crisscross the grounds, exploring portions of the foundation, now overgrown with foliage, and examining the painting, woodwork and architecture that still remains. A 10 kilometer moat surrounds what was created to resemble the Forbidden City of Beijing, and 10 gates protect these once royal grounds.

Be sure to catch one of the eight performances of traditional nha nhac dance at the nearby Hue Monuments Conservation Center from 9 a.m. until 4 p.m. daily.
Address: Vietnam
Read MoreShow Less

A Glimpse of Hue Tour

6
See where the Nguyen Dynasty ruled Vietnam during this half-day tour of the Imperial City of Hue and the Forbidden Purple City. Your informative guide provides a glimpse of this major historical complex, once a foremost cultural and religious center and now a UNESCO World Heritage site. You’ll ride a dragon boat on the Perfume River to Thien Mu Pagoda (Heavenly Lady Pagoda) and visit the Hue Royal Antiquities Museum. Round-trip hotel transport by minivan included.
...  More
From
US$22.40
US$28.00
US$5.60 savings
From
US$22.40
US$28.00
US$5.60 savings
Learn More

Spend a full day exploring UNESCO-listed Hue and relive the glory of the former Imperial capital. Get a taste of local life at the buzzing Dong Ba Market; cruise along the Perfume River to the sacred Thien Mu pagoda; then marvel over historic monuments like the Forbidden Purple City and Kinh Thanh Citadel. After lunch (own expense), discover the legacy of the Nguyen Dynasty with a visit to the elaborate Tu Duc and Khai Dinh tombs.
...  More
From
US$59.00
From
US$59.00
Learn More

4
Travel around Huế by cycle rickshaw.  Local riders will take you from your hotel around Huế’s Imperial City, the former political, religious, and cultural centre of the Nguyen Dynasty until 1945.  Once home to the Imperial Family and Emperors of Vietnam, you’ll see the Citadel, Nine Holy Cannons, Nine Dynastic Urns, The Flag Tower, Ngọ Môn Gate, Thai Hoa Palace, and the Forbidden Purple City.
...  More
From
US$29.24
From
US$29.24
Learn More

Visit Thien Mu Pagoda by boat on a Perfume River (Huong River) cruise during this private tour. Learn about the Buddhist landmark from your own personal guide before a short drive to visit the tombs of Khai Dinh and Minh Mang, former Nguyen emperors. After a restaurant lunch of Hue cuisine, wander through the Imperial City of Hue and the Forbidden Purple City, both part of the UNESCO World Heritage site where you’ll learn about Vietnam's history. Private hotel transfers are included.
...  More
From
US$61.54
From
US$61.54
Learn More

1
See the historic highlights of Hue your way with a private car service that allows you to create your own sightseeing itinerary. You’ll be able to explore the UNESCO-listed imperial city at your own pace and skip the hassle of car hire and navigation. Plus, hassle-free hotel pickup and drop-off mean that you don’t need to worry about finding a meeting point.
...  More
From
US$49.00
per group
From
US$49.00
per group
Learn More

Skip the crowded tour buses heading from Chan May into Hue and explore the remnants of this ancient capital at your own pace. Meet your guide at your cruise ship’s terminal – no hard-to-find meeting points on this tour – and take your own comfy vehicle into Hue on this private tour. Spend some time exploring the UNESCO World Heritage-listed Imperial City, taking in the grandeur of this centuries-old palace while your guide provides personalized commentary.
...  More
From
US$138.47
From
US$138.47
Learn More

Things to do near Hue