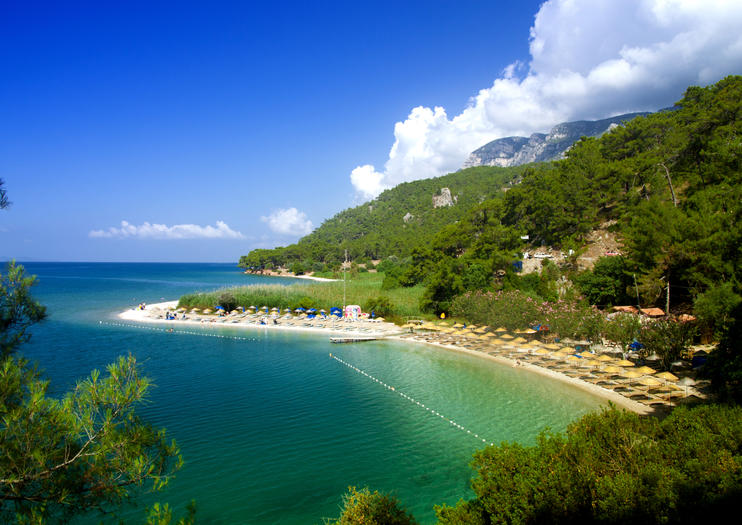 Set between two peninsulas in the Aegean Sea—Bodrum to the north and Datça in the south—and hemmed in by the dramatic sea cliffs, sandy coves and rocky islands of the Gulf of Gökova (also known as the Ceramic Gulf) make up some of the most picturesque landscapes of Turkey’s famous Turquoise Coast.

The Basics
The Gulf of Gökova boasts quiet coves surrounded by green forests, clear turquoise water, and mountains that turn red and yellow at sunset. Exploring Gökova Gulf is traditionally done by cruising along the shoreline, though it’s also possible to hike along the coastal Carian Trail, which runs from Cape Crio to Bodrum and through the sleepy resort town of Akyaka and the Kiran Mountains. From here, you can explore Cleopatra Island, famous for its seashell beach and an ideal spot for activities such as kayaking, scuba diving, snorkeling, kite surfing, and paragliding.

How to Get There
The Gulf of Gökova is located on Turkey’s southwestern Aegean coast, tucked in deep where the Bodrum Peninsula and the Datça Peninsula meet. The most popular way to reach the gulf is by cruise boat from Bodrum. Otherwise, fly from Istanbul to Dalaman (just over an hour away by plane) and take a taxi or drive an hour to Akyaka at the mouth of the gulf.

When to Get There
Gulf of Gökova is busiest during July and August. Visit during autumn to catch temperate weather and beat the crowds, or in May for the Marmaris Maritime and Spring Festival or the larger Marmaris Yacht Festival—celebrated with yacht races and street performances. In June or July the Marmaris Cinema Festival takes over, and in October Marmaris hosts yet another maritime festival, the International Race Week.

Cleopatra Island (Sedir Island)
Just off the Gulf of Gökova is Cleopatra Island, also known as Sedir Island, an enchanting spot with a romantic legend attached. Said to be the clandestine meeting place of Cleopatra and Marc Antony, the island is also famous for its unusually textured sands, made up of ground white seashells. The sand is so special, visitors must leave their shoes at the entrance to the beach, as sullying or removing the sand is strictly prohibited.
Address: Marmaris, Turkey
Read MoreShow Less

0 Tours and Activities to Experience Gulf of Gökova