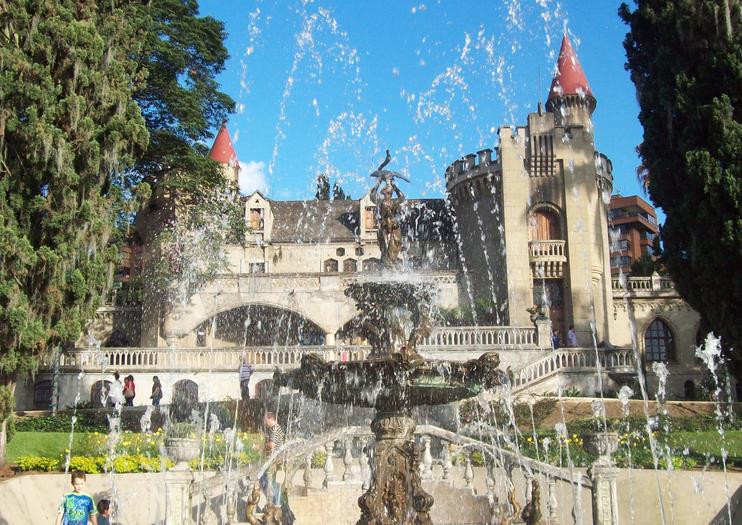 Visitors to Poblado, a wealthy area in the green hills of Medellin, are in for a surprise. Behind heavy iron, Gothic gates and amid trees covered in Spanish moss, there’s a 17th-century castle in the style of those in France’s Loire Valley.
Built in 1930, it was later bought by Diego Echavarria and his wife. This wealthy family’s passion for art and culture is obvious in their home, where French and Spanish artwork lines the walls. But the story behind the castle is even more interesting than the building itself. On free tours you will learn about the family’s history, including the death of their daughter and the kidnapping and death of Echavarria himself shortly after.
After these tragic events, the house and possessions were donated to the city of Medellin, and the castle was opened to the public as a museum in 1971. Everything has been preserved just as the family left it, and tours include glimpses of the bedrooms, the dining area with a 10-seat dining table and porcelain dishes, the library with all of the family’s books and many other personal items.
Outside, the immense garden has fountains, exotic plants and wildlife, and a view of the city of eternal spring with its mountainous backdrop. The museum also serves as a cultural center for dance, music, crafts and arts.

The castle is open Monday through Friday, 9am to noon and 2 to 6pm, and Saturday and Sunday 10am to 5pm. Admission is about $4 and free tours are available. To get to the castle, take the metro to the Aguacatala station and then catch a bus up the hill to the castle. You can also take a taxi. Photography is not allowed within the castle.
Address: Calle 9S # 32-269, Medellin, Colombia
Admission: $4
Read MoreShow Less

Your local foodie will unfold the best of Colombian cuisine as you taste some of the best food and drinks in Medellin During this street food tour in Medellin, you wander around the traditional local streets filled with bars and restaurants where the locals come together. Explore the city and spot architectural gems like the Romanesque church and an old grocery store that's become a lively local bar. Do like the locals do and have a colorful shot in Lleras Town ​that gets you in the mood with a Colombian ​vibe. Try 70% Colombian cacao chocolate mousse with an irresistible, exotic, mango and passion fruit sauce and the beloved empanada con queso. ​Discover papas criollas, a Medellin specialty​ , and the classic chorizo antioqueño or chicharron that will leave you asking for more. Enjoy authentic oat milk mixed with cinnamon, and try out a heavenly Alfajor de arequipe, a treat that goes down well with a cup of coffee or two!
…More
From
US$48.50
Price varies by group size
From
US$48.50
Price varies by group size
Face masks required for guides in public areas
Social distancing enforced throughout experience
Guides required to regularly wash hands
Learn More
Taking safety measures

Enjoy the best of Medellin and the most fascinating villages around with this 6 nights 7 days package including accommodation and personal english speaking guide with private vehicle. From arrival to departure, you will be introduced into local customs and breathtaking sceneries. This comprehensive package puts together the best of the city of Medellin during a couple of days for introduction, museums, and shopping. A couple of days are spent visiting the most representative villages around Medellin such as: Guatape and Santafe de Antioquia, which are considered part of the national heritage. And finally, a full day to a coffee farm just 1 hour away from Medellin, where you´ll learn the coffee process from the hands of a real collector, enjoy lunch, and ride horses. Tours are fully narrated, and start times are flexible so you may steer tour around according to your preferences
…More
From
US$1,149.00
Price varies by group size
From
US$1,149.00
Price varies by group size
Hand sanitizer available to travelers and staff
Social distancing enforced throughout experience
Regularly sanitized high-traffic areas
Learn More
Taking safety measures

Medellin, the capital of Antioquia, is home to some of Colombia’s most interesting museums and cultural sights. With this fully narrated tour, save time waiting in ticket lines at the Museum of Modern Art, Museum of Antioquia, and El Castillo Museum as you dig deeper into paisa culture with a local guide. This leaves plenty of time to wander, snap some photos, or grab a snack.
…More
From
US$54.00
Price varies by group size
From
US$54.00
Price varies by group size
Hand sanitizer available to travelers and staff
Social distancing enforced throughout experience
Regularly sanitized high-traffic areas
Learn More
Taking safety measures

Things to do near Medellín