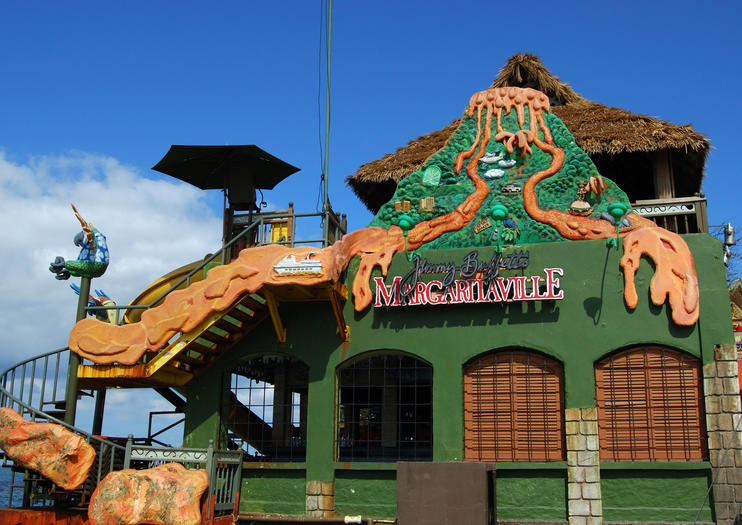 More than just a bar and restaurant, Montego Bay’s version of the Margaritaville chain is a Jamaica attraction in its own right. Situated on the Caribbean along the Hip Strip of Gloucester Avenue, the Jimmy Buffett–themed hot spot has a variety of water sports, a bustling nightlife scene, and island cuisine.
The Basics
Margaritaville visitors love the 120-foot (37-meter) waterslide that plunges into the ocean, as well as the collection of water trampolines and other fun floating structures, all watched over by lifeguards. Both bar decks feature nonstop entertainment, including music, dancing, and sports on big-screen TVs. The restaurant and bar serve the usual lineup of “cheeseburgers in paradise”—and no visit is complete without sampling the lineup of colorful tropical drinks.
Day tours in and around Montego Bay often stop at Margaritaville for a drink or a meal, and can be combined with stops at the popular Doctor’s Cave Beach, or shopping on the Hip Strip. Shore excursions from Ocho Rios, Falmouth, and Negril often include Margaritaville with other area activities.
Things to Know Before You Go
How to Get There
Margaritaville Montego Bay is located on the south end of Gloucester Avenue, about 10 minutes by taxi from the cruise ship pier.
When to Get There
Margaritaville is one of the most popular spots on the Hip Strip, so expect a crowd, especially after 10pm, when the restaurant closes and converts to a nightclub. It's best to call or email ahead for reservations if arriving with a large group.
Jimmy Buffett
Jimmy Buffett is an American musician turned businessman and philanthropist. His most famous songs—such as “Cheeseburger in Paradise,” “Grapefruit–Juicy Fruit,” and of course “Margaritaville,” after which his chain of restaurants is named—evoke a laid-back, island-style attitude. With Margaritaville locations all over the Caribbean, his spirit and whimsy can be felt at each one.
Address: Hip Strip/Gloucster Ave., Montego Bay JMCJS12, Jamaica
Admission: Varies
Read MoreShow Less

Things to do near Montego Bay