Welcome to Viator!
By creating an account, you agree to our Terms & Conditions and Privacy Policy.
We're creating your account. This may take a few seconds...
Account creation successful! Thank you.
Something went wrong. Please try again on the sign up page.
Questions? (888) 651-9785(888) 651-9785
When are you traveling?
Select Dates
Recommendations
All Recommendations
Nara Tours from Osaka
Things to Know About Food Culture in Osaka
Must-See Museums in Osaka
How to Experience Cherry Blossom Season in Osaka
How to Spend 3 Days in Osaka
Kyoto Day Trips from Osaka
Food Lover's Guide to Osaka
Price
US$0
US$500+
Duration
Time of Day
RatingClear
Specials

How to Spend 3 Days in Osaka 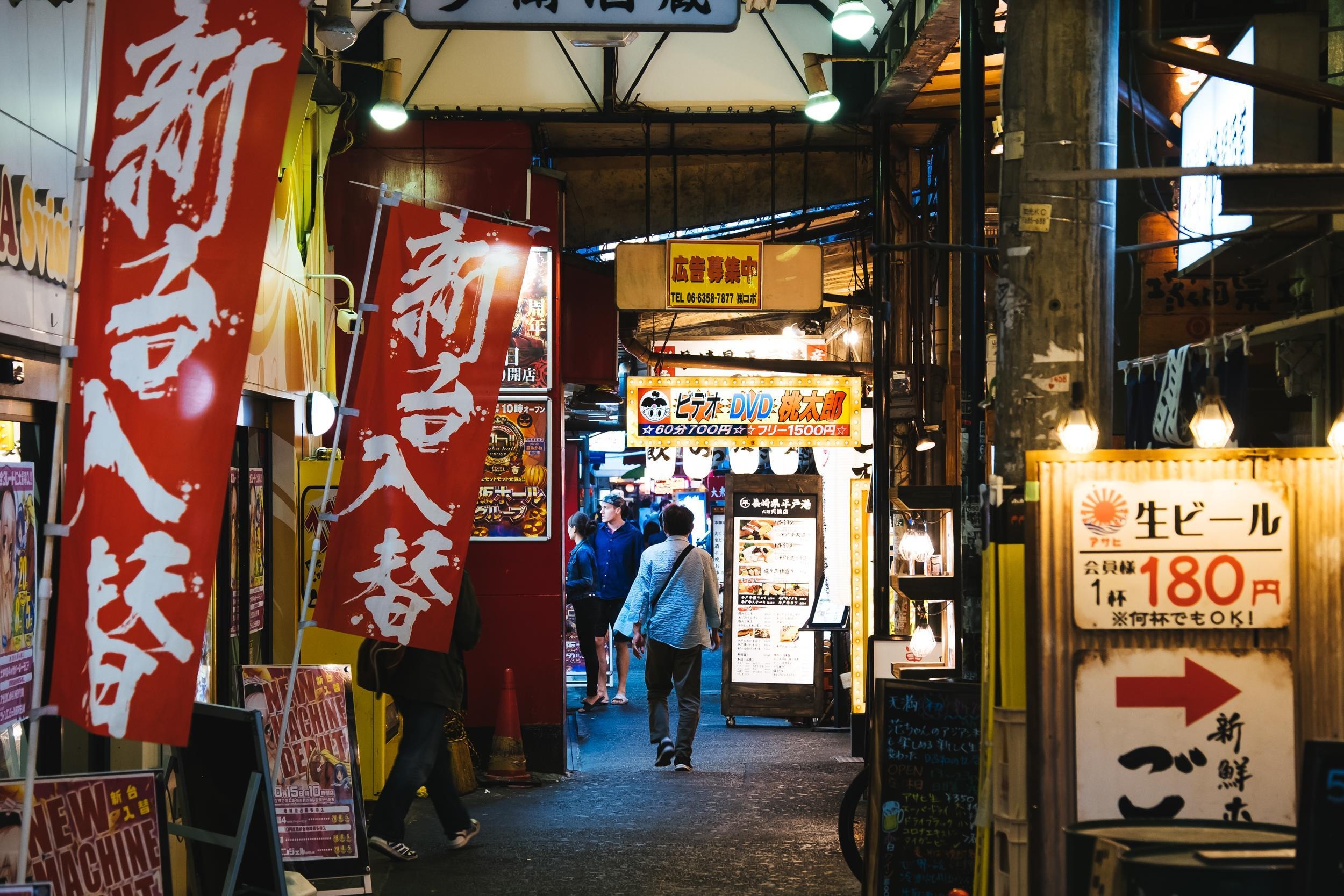 With three days in Osaka, you have plenty of time to deeply explore both the traditional and the modern sides of this laid-back city, as well as get out of town to one or two of Japan’s ancient capitals. Here are a few ways to see, taste, and otherwise experience the very best of Osaka in three days.

One of the best ways to see Osaka’s top sights and get your bearings is by embarking on a group or private tour by bus or by foot. Tours typically include stops at such must-sees as Osaka Castle, Shitennoji Temple, the Umeda Sky Building, and the colorful, neon-bright Dotonbori district. Some tours also include a river cruise. Other options include chartering a private bus, limo, or van, with a driver and optional guide, and creating your own itinerary for exploring Osaka’s sights. Alternatively, a hop-on hop-off bus and boat tour allows you to create your own sightseeing plan, disembarking at places of interest along the route. Tours usually include a public transit pass for further independent exploration.

In the evening, get a taste of Osaka’s famous eats on a street food tour of downtown. Feast on local classics including the takoyaki (battered octopus balls) for which the city is known.

Now that you have seen the city’s main landmarks, delve deeper into local culture on a walking tour that is focused on a particular aspect of city life. You can take a tour that penetrates off-the-beaten-path, lesser-known neighborhoods or a tour focused on visiting Osaka’s most important temples and shrines. Other options include otaku (manga and anime enthusiast) tours that visit cosplay theaters, game shops, and maid cafés, as well as tours that teach the art of traditional Japanese skills such as the tea ceremony, sword techniques, or Japanese cooking.

For dinner tonight, indulge in another evening of culinary adventure on a small-group food and drink tour that takes you to hidden-away bars and restaurants to eat Osakan favorite dishes, such as kushikatsu (fried food on sticks) and tonpeiyaki (grilled pork and egg).

The ancient capital of Kyoto is an easy day trip from Osaka. On a full-day tour you can absorb the city’s traditional atmosphere, explore its rich culture and UNESCO World Heritage–listed sites, stroll through serene gardens, and marvel at such spectacular attractions as the seemingly endless torii gates at Fushimi Inari Taisha shrine, the 1,000-plus Bodhisattva statues at Sanjusangendo Hall, and the gleaming Temple of the Golden Pavilion (Kinkaku-ji). Tours often include hotel pickup and lunch.

Some full-day tours also include a visit to the charming nearby city of Nara, another of Japan’s ancient capitals, which is home to Todai-ji temple, an 8th-century structure that houses some of Japan’s national treasures. Nara is also known for its eponymous park, populated by more than 1,000 deer.

11 Tours and Activities | All Osaka Tours

136
Go off the beaten track—and avoid tourist traps—on this nighttime walking tour of Osaka. In a small group of no more than six people head for the foodie districts of Tenma and Kyobashi to sample local dishes, enjoy a few drinks, and get to know the locals.
…More
From
US$109.00
Price varies by group size
From
US$109.00
Price varies by group size
Face masks required for guides in public areas
Guides required to regularly wash hands
Regular temperature checks for staff
Learn More
Taking safety measures

173
See Kyoto and Nara’s spectacular sights on a full-day sightseeing tour of the cities from Osaka. Accompanied by a knowledgeable guide, gain fascinating insight into the rich historical heritage of the region’s legendary landmarks. Begin your cultural excursion with a guided tour of the ancient Nijo Castle, and then absorb the aesthetic majesty of both Kyoto Imperial Palace and Kinkaku-ji Temple. Revitalize with a traditional Japanese and western-style buffet lunch then explore nearby Nara, home to majestic monuments like the Great Buddha of Tadoi-ji Temple and Kasuga Shrine.
…More
From
US$181.17
From
US$181.17
Face masks required for travelers in public areas
Face masks required for guides in public areas
Face masks provided for travelers
Learn More
Taking safety measures

140
Get a taste of local life in Osaka on a walking tour of Japan’s third largest city. Witness Osaka’s different faces, from bustling business center to historic cultural hub, as you follow your guide through the city’s vibrant neighborhoods. Stroll along the lively waterfront of the Dotonbori entertainment district; visit the landmark Hozenji temple; and ride the subway like a local. Get an insight into Japanese cuisine and sample local specialty Kushikatsu as you explore traditional Shinsekai.
…More
From
US$53.29
From
US$53.29
Face masks required for travelers in public areas
Face masks required for guides in public areas
Hand sanitizer available to travelers and staff
Learn More
Taking safety measures

Day Trip by Bus to Kyoto from Osaka/Kyoto

50
Enrich yourself with the fascinating history of Kyoto’s numerous UNESCO-listed temples and shrines during this day trip from Osaka. Explore the seemingly endless ‘torii’ gates at Fushimi Inari Taisha shrine, visit Kiyomizu-dera temple, and explore Kinkaku-ji temple. Customize your trip by adding on a deluxe or standard Japanese style lunch, and select from four pickup points.
…More
From
US$71.81
From
US$71.81
Face masks required for travelers in public areas
Face masks required for guides in public areas
Face masks provided for travelers
Learn More
Taking safety measures

4
Don’t leave visiting Osaka’s most enticing eateries to chance, guarantee culinary delights on this private 3-hour food tour of downtown Osaka. Alongside a gastronome guide, you’ll visit popular bars and food stalls to feast on Japanese classics including grilled seafood, meat skewers, savory pancakes, and Asian-style pizza. Wash it down with included beer, sake, and soft drinks, and absorb the vibrant atmosphere and bright lights of downtown Osaka. Hotel pickup and drop-off are included.
…More
From
US$190.04
Price varies by group size
From
US$190.04
Price varies by group size

27
Experience the best of both worlds on this half-day Osaka walking tour, designed to reveal popular attractions and hidden gems. Tick off icons such as Osaka Castle (Osaka-jo) and Tsuruhashi Market, and explore the Dotonbori district, famed for its Japanese snacks and neon signs. Plus, explore lesser-known neighborhoods such as Shin-Sekai—full of unique charms. Choose from a morning or afternoon tour.
…More
From
US$60.00
Price varies by group size
From
US$60.00
Price varies by group size
Face masks required for guides in public areas
Transportation vehicles regularly sanitized
Guides required to regularly wash hands
Learn More
Taking safety measures

65
Discover the culinary traditions of Japan in Osaka, one of Japan’s best food cities, during this small-group cooking lesson. Learn the preparation methods for popular Japanese dishes including green tea, takoyaki (fried balls of wheat flour and octopus), okonomiyaki (savoury pancakes), and miso soup. Expand your Japanese cuisine knowledge, and best of all, you get to eat your creations when you’re finished. This small-group course, limited to just eight participants, also includes a guide, a cooking instructor, and an optional sake and beer tasting.
…More
From
US$95.02
Price varies by group size
From
US$95.02
Price varies by group size

62
Wander past the most famous attractions in Osaka during this guided walking tour that includes lunch and a river cruise. Follow your guide as you check out landmarks such as Osaka Castle and visit the Floating Garden Observatory at the Umeda Sky Building, before boarding your ship to admire sights including the Twin Towers and City Hall on Nakanoshima Isle. Your Osaka walking excursion and river cruise also includes all entrance fees.
…More
From
US$145.32
From
US$145.32
Face masks required for travelers in public areas
Face masks required for guides in public areas
Face masks provided for travelers
Learn More
Taking safety measures

54
See all of Kyoto’s spectacular sights on a comprehensive full-day tour from Osaka. Accompanied by a knowledgeable guide, absorb the imperial majesty of legendary landmarks like Nijo Castle, Kiyomizu Temple, and the Golden Pavillion. Marvel at more than 1,000 Bodhisattva statues at Sanjusangendo Hall; stroll the manicured gardens surrounding Fushimi Inari Taisha; and discover the opulent chambers of the Kyoto Imperial Palace on a guided tour. Enjoy the convenience of round-trip transportation from central Osaka and a traditional Japanese lunch on this comprehensive cultural tour.
…More
From
US$165.67
From
US$165.67
Face masks required for travelers in public areas
Face masks required for guides in public areas
Face masks provided for travelers
Learn More
Taking safety measures

3
Choose your own adventure in Osaka thanks to this fully-customizable 8-hour private tour. Travel aboard your very own chartered bus, limo or van as you explore a range of of Osaka’s most unique sights. Depending on your interests you might visit historic Osaka Castle, explore Shitennoji Temple, eat and drink your way through the Dotonbori district or take in the views from the Umeda Sky Building. A driver, chartered vehicle and round-trip transport from Central Osaka are included.
…More
From
US$739.21
per group
From
US$739.21
per group
Face masks required for travelers in public areas
Face masks required for guides in public areas
Hand sanitizer available to travelers and staff
Learn More
Taking safety measures

Learn The Katana 'Sword' Technique of Samurai and Ninja

4
Discover the ways of a true Japanese warrior during this 90-minute lesson covering sword skills, poses and Shuriken (star) throwing. Gain some inspiration for your training as you watch a performance by three Samurai and a ninja. Then suit up in a traditional kimono, ninja costume or samurai armor as you learn the sword cutting technique of ‘tate,’ combining a balance of posture and mental focus. Finish your day by performing a ninja scene and try throwing a rubber version of the Shuriken (ninja star). An instructor and costume are included.
…More
From
US$90.60
From
US$90.60
Face masks required for travelers in public areas
Face masks required for guides in public areas
Face masks provided for travelers
Learn More
Taking safety measures