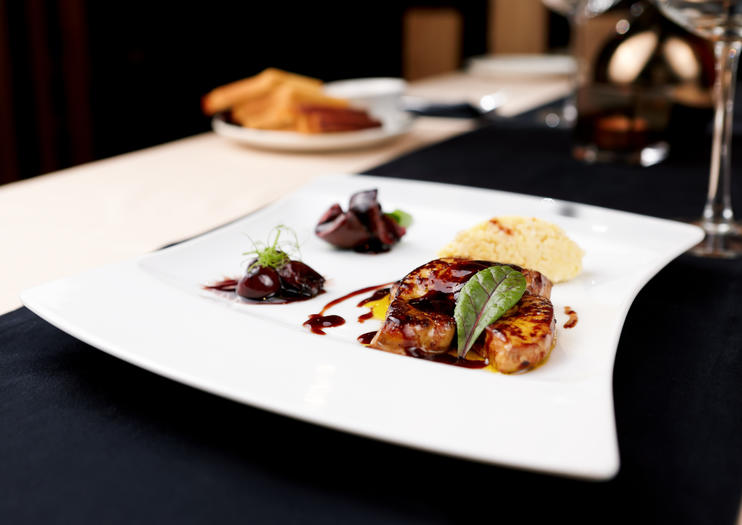 Restaurant Les Ombres—whose name translates to “The Shadows”—is more than just a fine-dining destination. Situated on the roof of the Musée du Quai Branly, the restaurant is best known for its up-close views of the neighboring Eiffel Tower, which can be admired from its open-air terrace or through its glass-and-iron roof.

The Basics
Famed for its striking looks—it was designed by French starchitect Jean Nouvel—Restaurant Les Ombres also offers one of the city’s best perspectives on the Eiffel Tower, as well as panoramic views over the City of Lights. Situated five stories up on the Musée du Quai Branly’s roof, the restaurant has been a popular sightseeing destination since its opening in 2006. A top choice for epicureans, the restaurant specializes in classical French cooking: think foie gras with purple figs, roasted salmon with caramelized leeks, and confit pork belly.

A visit to Restaurant Les Ombres can easily be paired with a tour of the worthwhile Musée du Quai Branly, or with a sightseeing stop at the Eiffel Tower, which is located just east of the museum.

How to Get There
Located on the roof terrace of the Musée du Quai Branly, Restaurant Les Ombres can be accessed at 27 Quai Branly or via the museum’s pretty garden. Take Métro line 9 to Alma-Marceau, or take the RER C to Pont de l’Alma. The restaurant is also served by bus lines 42, 63, 80, and 92 and can be accessed on foot, by car, or by Vélib’ bike.

When to Get There
Restaurant Les Ombres is open daily, and its hours operate independently from those of the Musée du Quai Branly. Lunch is served from 12 to 2:45pm, and two nightly dinner services are held at 7pm and 9:30pm.

The Musée du Quai Branly
Don’t miss the chance to explore the Musée du Quai Branly, which has become one of Paris’ top museums since its 2006 opening. Dedicated to the traditional arts and cultures of Asia, Africa, Oceania, and the Americas, the museum’s vast collection includes over 700,000 objects.
Address: 27 Quai Branly, Paris 75007, France
Read MoreShow Less