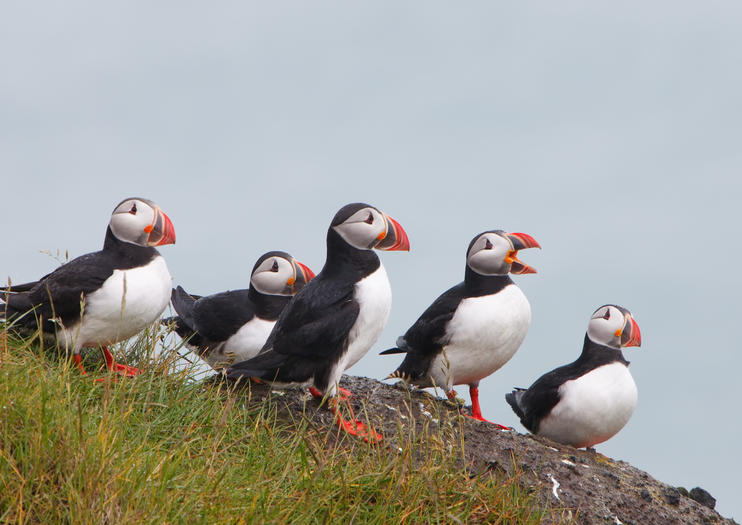 The Icelandic island of Akurey lies off Reykjavik’s shore in the Kollafjordur fjord. Many puffins nest here each summer—a big draw for visitors keen on sighting the seabirds. Puffins nest in the same burrows year after year, laying a single egg each spring, feeding their puffling for a month or two before heading back out to the open sea.
The Basics
Many puffin-watching tours also cruise by Lundey (literally “Puffin Island” in Icelandic). While you cannot land on either island, boat tours get close enough to see the puffins. Naturalist guides are on hand to share interesting facts about the birds’ behavior. Akurey is uninhabited, which is why it has become such a thriving haven for nesting seabirds. Although puffins are the main draw, you can also see cormorants, black guillemots, kittiwakes, and Arctic terns.
Things to Know Before You Go
How to Get There
Akurey is only accessible by boat. Organized tours generally depart from Reykjavik’s Old Harbour (a short walk from downtown) and take visitors out into the bay aboard yachts, rigid inflatable boats (RIBs), or replicas of traditional Icelandic sailboats.
When to Get There
Atlantic puffins spend most of their lives far out at sea, only coming onto land to breed and nest during the summer. From early April through September (the only period of time you will see them in Northern Europe), multiple tours depart throughout the day.
Puffin Spotting and Whale Watching
You can combine puffin spotting with whale watching on a tour that combines both around Akurey. During roughly the same season (April through October), you can spot minke and humpback whales in Faxafloi Bay.
Address: Reykjavik, Iceland
Read MoreShow Less

Things to do near Reykjavik