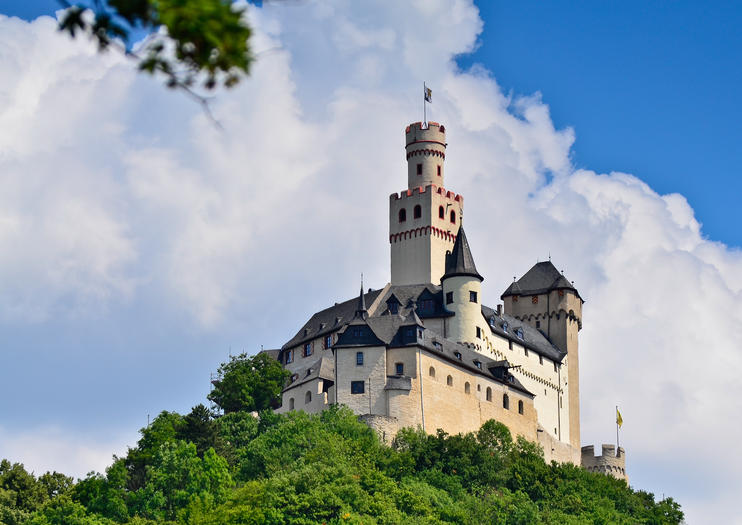 One of the lace of fantastical castles perched along waterways near the Rhine, Burg Eltz is Gothic in style, and its many towers and turrets have dominated its lush, green valley since medieval times. Like many of the German Rhineland castles, this could easily have been the model for Disney’s Sleeping Beauty Castle, appearing to morph out of its rocky crag and almost completely surrounded by the sinuous curves of the River Eltz.
With spots as high as eight stories up, it has its origins in the 13th century, when it was built high above the valley floor for defense purposes. Building continued for centuries, with further expansions being added hundreds of years later.
Amazingly, Burg Eltz has been owned by three branches of the same aristocratic family since the 13th century. It's built around a central courtyard and was one of the few castles that escaped the last world war unscathed. Guided tours incorporate the armory, medieval frescoes, masterpieces by Cranach and elaborate wooden carvings of the Knight’s Hall, where generations of the three families have held their celebrations. In fact, so picture-perfect is Burg Eltz that it is featured on the DM500 note of the now-defunct German currency.

Burg Eltz sits near Wierschem and is open daily from April to September from 9:30 a.m. to 5:30 p.m. Admission costs €9 for adults, €6.50 for students and €6 for school children. Forty-five-minute guided tours start every 15 minutes. A free shuttle bus runs up to the castle from the car park, or alternatively, there’s a steep, 15-minute walk.
Address: Burg-Eltz-Strasse 1, Münstermaifeld 56294, Germany
Admission: Adults: €9; Children: €6
Read MoreShow Less

When it comes to the world of wine Germany has been in the wine game since the Romans planted wine and offers some of the world's most elegant and aromatic wine varieties, most notably for the noble Riesling. On the Mosel Tour We will embark on a Grape Escape through 50Km of the "Mittel Mosel" visiting a mix of VDP (top 200 German wineries) and boutique family managed vineyards with heart and soul, showing great examples of how German wine traditions have been reshaped into some of Germany's best-respected wineries from the Mosel. On request and based on location of stay it is an option to visit Berg Eltz - in the the upper Mosel region. During private tastings there will be many opportunities to swirl, sniff and slurp German Sparkling called Sekt, and try ( the star of the show) many variations of dry to late harvest Riesling coming from the different terroirs of blue, red and grey quartzite slate We might even find some special German Pinot Spätburgunder (red) along the way.
…More
From
US$369.75
From
US$369.75

Things to do near Rhine River