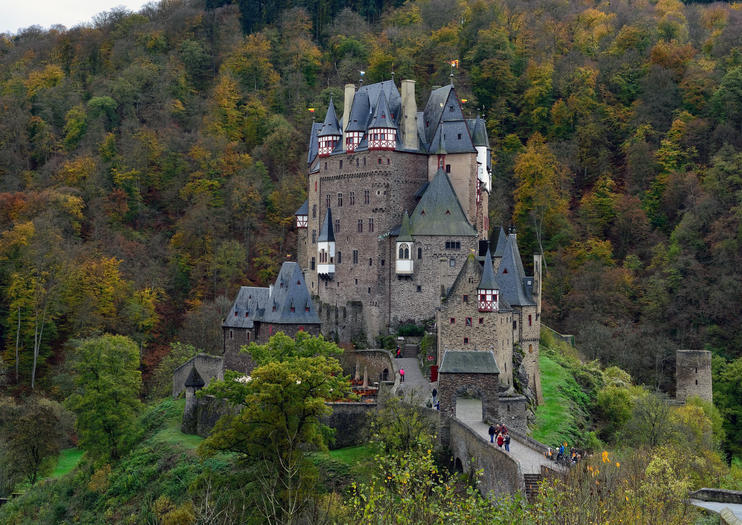 As the only German castle to have survived the turbulence of the last 800 years without being destroyed, Marksburg sits on the banks of the Rhine near its confluence with the River Moselle.
Built in medieval style with a vast central tower, it is less ornate and less flamboyant than many of its fanciful near neighbors such as Reichsburg Cochem, as it was built for protective purposes rather than as a private residence.
The castle was already 300 years old when it was further fortified and converted into a defense tower in the 15th century to protect the town of Braubach from attack. The castle has survived troubled times and has lived many different lives; for a while in Napoleonic times it was a prison, but today its future is safely conserved as the headquarters of the German Castle Association.
Tours of Marksburg take in the fortifications, drawbridges and battery as well as the vast, vaulted ceremonial chambers, armory and stables, which in a former incarnation doubled as a torture chamber.

Marksburg is near the town of Braubach and is open daily from November to mid-March from 11 a.m. to 4 p.m. From mid-March to October, it is open from 10 a.m. to 5 p.m. Admission costs €6 for adults, €5 for students and €4 for children under 17. Guided tours lasting 50 minutes are available daily and depart every 20 minutes; English speakers need to book in advance.
Address: Deutsche Burgenvereinigung e. V. Marksburg, Braubach 56338, Germany
Admission: Adults: €6; Children: €4
Read MoreShow Less

Rhine River Hop On Hop Off Cruise on Castle Route

34
Revel in the beauty and history of one of Europe's great waterways with this hop-on/hop-off cruise pass on the romantic Rhine River. Admire passing scenery like legendary Loreley Rock and imposing castles while sipping a coffee or beer on deck, and customize your itinerary with 19 different stops at tiny medieval towns and bigger cities along the way. The pass is valid all day on the UNESCO-listed Middle Rhine from Cologne to Linz and Koblenz to Mainz.
…More
From
US$40.39
From
US$40.39
Face masks required for travelers in public areas
Face masks required for guides in public areas
Hand sanitizer available to travelers and staff
Learn More
Taking safety measures

Things to do near Rhine River